Having spent so much time with my Israelites for last year’s Passover cover photo shoot, I thought it would be nice to see where they ended up. They successfully exodused from Metaphorical Egypt, as COVID was just getting started, and are now living in various places around the world. With the exception of Moses, who is still wandering the desert (but with good wi-fi), they all have solid roofs over their heads and are relatively sedentary, especially now, during COVID. They’ve kept in touch and are marking their one-year anniversary in freedom with a Zoom seder, as depicted on this year’s Passover cover. They offer holiday greetings in English, French, Spanish, Judesmo (or Judeo-Spanish), Hebrew, Yiddish, Portuguese and Russian. 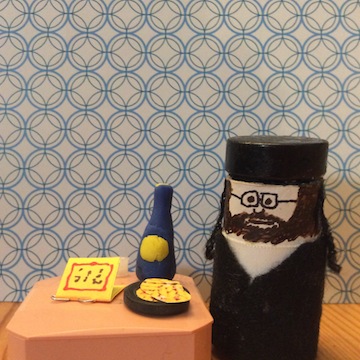 While one of the Israelites couldn’t join the online gathering for the first night of Passover, as he doesn’t Zoom on the holy days, he does send his best wishes in the language of your choosing. My hope for them is my wish for all of us – that, next year, we can all gather together in-person with our loved ones, whether they be in Jerusalem, Vancouver or anywhere in between. And that we can do so without the need for masks, sanitizer or social distancing.

“The Crossing of the Red Sea,” a painting by Nicolas Poussin, which was commissioned in 1632. It can be found at the National Gallery of Victoria in Melbourne, Australia. (photo by Nicholas Poussin via Wikimedia Commons)

The Israelites left Egypt on the first day of Passover, but the Egyptians didn’t leave them until the sea separated them forever on the seventh day. By celebrating Passover for seven days, we celebrate ambivalent feelings of joy and stress. Shabbat Shira – the Shabbat whose Torah portion contains the song sung by Israel after the splitting of the Red Sea – invites us to focus on the miracle of Passover’s seventh day.

Just imagine the unbearable stress when Israel was caught in a death trap between the Egyptians and the sea, the shouts, cries and prayers. Imagine the hand of Moses raised, the long and dark night between the protecting pillar of fire and the cloud, the great wind splitting the sea in two, the first steps into the water, crossing on dry land, seeing the vicious enemy destroyed.

It is not surprising that it resulted in an epic song. While evil was drowned in deep water, happiness flooded Israel. Only a heartless man wouldn’t sing. How many of us are capable of imagining this and meaning what they say in Exodus (15:1-2): “Sing to God…. This is my God, and I will glorify Him.” What a great national miracle that was, once upon a time.

Is this episode still relevant for us today? When we think of the Sinai revelation, it’s clear – we have the Torah. But is something left from the Song at the Sea? If the answer is yes, what is the key for finding meaning?

Our sages interpreted the future tense of the song as indicating a song that hasn’t yet been sung. Thus, for example, they say, “It is not written, ‘then Moshe sang,’ but ‘will sing.’” The sages also attributed a double reading to the words “Elohai avi” – they read it as both, “the God of my fathers,” and “God is my father.” They elaborated on the significance of the song to “every single generation.”

My grandmother, Savta Privah, sang her personal song at the sea more than 70 years ago, when she was liberated from Auschwitz. On her way from the refugee camps to Israel, she told my grandfather, “Now that we are making aliyah to Israel, from now on, we are Zionists.”

Going down from the ship, my grandfather, Saba Menachem, was asked for his occupation. He had lost his parents at a young age and had worked for his living even before the Holocaust.

Very well, they said, register with the labour union and we will find you a job.

“I had enough red flags in Europe,” my grandfather said, and established his own business.

Ironically, he found work at Mishmar Ha’Emek, one of the most anti-traditional Israeli kibbutzim. He was the only observant employee. Back then, they had two dining rooms, one for the young kibbutznikim and another one for the elders, because only they kept kosher.

My grandfather – a young man at that time – used to eat with the elders. One day, Shoshana Hazan, mother of Yaakov Hazan, leader of the Shomer Hatza’ir youth movement, came to his table with two Shabbat candlesticks.

“These are our family silver Shabbat candlesticks,” she said, “but my daughter-in-law would never use them. Take them to your wife to light Shabbat candles.”

Dr. Shraga Bar-On is a member of the Beit Midrash for New Israeli Rabbis Program of the Shalom Hartman Institute and HaMidrasha at Oranim.

The illustration on this year’s Passover cover, “Miriam Dances,” was created by artist Carol Racklin-Siegel for the book Let My People Go (EKS Publishing, 2011). In this hand-painted silk art, Racklin-Siegel depicts the joy of Miriam the Prophetess leading the women in song and dance after reaching dry land: “Miriam the prophetess, the sister of Aaron, took her drum in her hand and all the women went forth after her with drums and with dances.” (Exodus 15:20)

Racklin-Siegel is an award-winning textile artist and illustrator focusing on custom hand-painted textiles, Judaic textiles, paintings and illustrations. She expresses the spirituality of Judaism by incorporating her textile designs and fabric painting techniques to Judaic and biblical themes. She has illustrated a series of books for children, based on the stories in Genesis, for EKS Publishing Co. in Oakland, Calif. She resides with her family in Israel. Her work can be viewed at pomegranatestudios.com.

Moses, as best I recall from Hebrew school and The Ten Commandments, was a reluctant prophet with a speech impediment who was ultimately persuaded by the unspeakable, unceasing suffering of his people – and God’s fearsome support – to confront Pharaoh and lead the Hebrews out of slavery.

My, how (biblical) times have changed. The much-anticipated Hollywood epic Exodus: Gods and Kings reinvents the saga of a people’s miraculous liberation as one rugged individualist’s journey of self-discovery, identity and profound purpose.

The fundamental matter of spirituality, which might be defined in this context as the courage and power of faith, comes up in conversation a few times but not in ways that impact the movie-goer’s experience. Your post-film repartee is more likely to centre on the curious and disconcerting form in which God (or is it an angel acting as his emissary?) appears.

Exodus: Gods and Kings, which opened everywhere Dec. 12, is a sun-blistered chunk of glowering, male-centric mythmaking. Aside from its oddly anti-climactic ending – recognizing that it’s a tough call how many desert miles and years to continue the tale after the Red Sea – this is a well-paced, continuously engaging piece of mainstream entertainment with the requisite amount of impressive visual effects (in 3D). Just don’t go expecting to be awed, or to have a religious encounter.

Title cards inform us at the outset that the year is 1300 BCE and the Hebrews have been slaves in Egypt for four centuries. However, “God has not forgotten them.”

Exodus immediately launches into a full-scale, screen-filling battle scene – a preemptive attack that might be construed as a comment on the Iraq War – in which the seed of Ramses II’s paranoia and jealousy of Moses is planted. This section is designed to excite male viewers but also to inoculate them against the ensuing hours of banter, revelation, wilderness wandering and domesticity before the warrior hero returns to Egypt to blow things up real good. (You think I’m kidding, but Exodus boasts fiery explosions like any other self-respecting, would-be action movie.)

Even if he was raised as a prince of Egypt, the portrayal of Moses as self-confident and militarily adept takes some getting used to. It does explain, however, his disbelief when the gutsy Jewish elder Nun (Ben Kingsley) informs him that he was a lowly Hebrew infant smuggled upriver toward the Pharaoh’s palace.

The biblical story is quite familiar to us, of course, even if creative licence is employed via verbal flashbacks and narrative compression. Consequently, Exodus is most intriguing from a Jewish perspective for the ways it alternately evokes and evades the dominant events in the modern Jewish world – the Holocaust and Israel (its founding, existence and current relationship vis-a-vis the Palestinians).

The 20th-century genocide of Jews is alluded to in myriad ways, from the burning of the corpses of slaves to the Egyptians lined up to insult the Hebrews as they leave. (The Exodus is presented as complying with Ramses II’s order to get out, so it is a deportation.)

An earlier sequence, in which Ramses’ soldiers knock down doors and brutalize Hebrew families in an effort to find (and kill) Moses, inevitably, recalls the Nazis.

When The Ten Commandments opened in 1956, the Holocaust was so recent, and raw, that it didn’t need to be referenced. The horrific genocide did inform the movie, however, in that the general public needed no help rooting unequivocally for the Hebrews’ freedom.

Another key factor was the new state of Israel’s status as a universal symbol of hope and rebirth. That image no longer holds sway, and the filmmakers acknowledge the contemporary perception that the oppressed have become oppressors.

While Moses and Joshua strategize how to cross the Red Sea, and Ramses’ chariots thunder in pursuit, they take a moment to ponder the Hebrews’ eventual return to Canaan. Now numbering 400,000, Moses points out, “We would be seen as invaders.”

This is an unexpected acknowledgement of power, one that Arab audiences (in Jordan, Lebanon, Iraq, Kuwait, United Arab Emirates, Oman, Qatar and Egypt, where Exodus: Gods and Kings opens Dec. 25 or shortly thereafter) will welcome. Evangelical Christians in the United States, another large target market, will have the opposite response, presumably.

Jews, of course, will interpret and respond to the film from yet another perspective. The Torah does lend itself to various readings, after all. So does this robust movie, even if it is unlikely to inspire study groups.