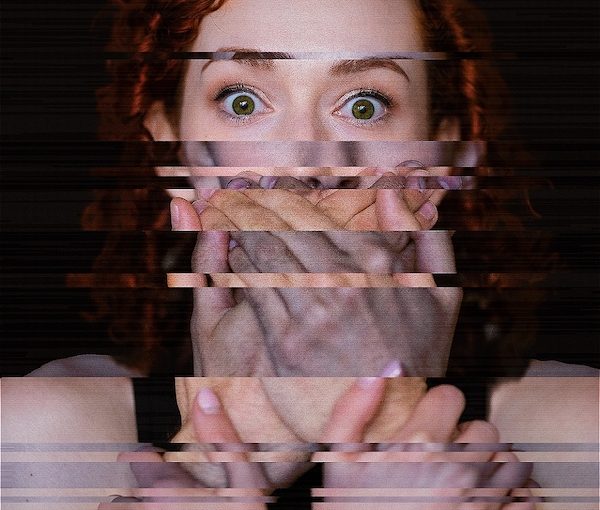 Katherine Matlashewski is creator, performer and co-producer of Disclosure, which “explores the struggles of a survivor searching for pathways toward healing in an adversarial medical system.” (photo from Disclosure Productions)

“Disclosure was inspired by a true story that focuses on the process of healing,” explained Katherine Matlashewski, creator, performer and co-producer of the production that will see several performances during the Vancouver Fringe Festival, Sept. 8-18.

“The way in which trauma affects the mind and body is complex and unique to each individual,” Matlashewski told the Independent. “Through movement, spoken word, soundscape and humour, Disclosure explores the struggles of a survivor searching for pathways toward healing in an adversarial medical system.”

An interdisciplinary artist, Matlashewski is a graduate of Studio 58. She has trained with Arts Umbrella and the Arts Club, and has performed with several companies, including Theatre Replacement, Metro Theatre, Stage 43 and Royal City Musical Theatre. The award-winning theatre artist is an instructor at Carousel Theatre for Young People and Arts Umbrella.

“Prior to attending Studio 58,” she said, “my training was based in movement and musical theatre. In musical theatre, when a character does not have the words to express themselves, they sing. When singing is not enough, they dance. I do not always have the words to describe how I am feeling, so I naturally turn to creating interdisciplinary works. While I was developing Disclosure, I realized that combining multiple disciplines could be utilized to convey what could not be communicated through text.”

Every Fringe performance of Disclosure will include a 10-minute post-show discussion facilitated by a representative from WAVAW Rape Crisis Centre.

The first iteration of the one-person show was presented at Studio 58 as part of Matlashewski’s graduation solo performance this past spring. “With the hopes of expanding Disclosure to a wider audience,” she said, “I applied for the 2022 Vancouver Fringe Festival. After my performance at Studio 58, I was approached by director Jane Heyman about developing my show further. After being selected as a Vancouver Fringe Festival lottery finalist, I reached out to Jane about directing the show for the Fringe and I was overjoyed when she accepted! I then began building a creative team of local emerging and early career artists.”

Heyman is also a member of the Jewish community, and she was already attached to the production when creative producer Natasha Zacher came on board.

“Katherine and I connected in May 2022, after Disclosure was accepted into the Vancouver Fringe Festival,” said Zacher. “However, we have known each other for a few years, since working alongside each other on a (very!) different Vancouver Fringe Festival show in 2015. Katherine reached my way as she knew a good deal about my professional journey, integrating work as an independent theatre-maker and a mental health clinician. We reconnected quickly on the premise and hopes for the production, and I was very glad to join the team.”

As a producer, Zacher said, “My primary focuses are on seeking funding for the show (grants, sponsorships, donations), creating and managing our budget, coordinating timelines for marketing and promotions initiatives for the show … contracting artists, liaising with the Vancouver Fringe team regarding production needs and, recently, developing and facilitating COVID-19 safety plans.”

Given the nature of the production, there are additional safety plans.

“It is important to take the time to create a safe, inclusive and accessible rehearsal and performance space,” said Matlashewski. “Part of my artistic practice is to create a ‘room agreement.’ This is a living document, written by the artists involved in the production. In our room agreement, we include boundaries and guidelines about how we will communicate and conduct ourselves in the rehearsal process. Something I value is taking the time to include a check in and out at the beginning and end of each rehearsal day.

“In addition,” she said, “to promote self-care, the artistic team has decided to stagger rehearsals, and also observe Shabbat by not rehearsing on Fridays.”

The seriousness of the material does not mean Disclosure is devoid of lighter moments.

“There are many ways to heal from trauma. Humour is one of them!” Matlashewski said. “Having witnessed and experienced generational trauma, I have come to understand that humour can help create distance from a difficult incident. In addition, sometimes humour is more palatable for an audience. For me, the journey to healing is like a rollercoaster. It is not linear in any way. Even in the most challenging of times, humour can facilitate healing.”

Disclosure will be presented at the NEST on Granville Island during the Fringe Festival. For anyone wanting to support the show, there is a GoFundMe campaign. “Funds raised will go directly to production costs and compensating the artists involved for their time, energy and expertise,” said Matlashewski.

Other ways to support the production include buying tickets to one of the shows (vancouverfringe.com/festival/disclosure), sharing the GoFundMe page link (gofund.me/43a8ae0d) with friends and following the production on Instagram (@disclosure.production).

“I am looking forward to seeing how the audience responds to the performance,” said Zacher. “I don’t have any expectations, and want to walk into the experience of getting the show on stage as an open book. I hope the audience feels empowered to take with them whatever supports them to feel seen and heard.”

Alley Theatre, in partnership with Good Night Out Vancouver, presents the world première of a multi-perspective, docu-theatre dance creation entitled #whatnow, Oct. 28-Nov. 7, at the Russian Hall, as part of the Downtown Eastside Heart of the City Festival.

After collecting hours of audio interviews from people of different genders, sexual orientations, cultures, ages and abilities, real-life stories and reflections around the #metoo movement come to life through the mediums of headphone verbatim (explained below) and dance.

“This piece is both a celebration of survival and a call for action,” explained co-director and sexual assault survivor Marisa Emma Smith. “What surprised me the most about interviewing people is their natural humour and poeticism. We couldn’t have written better lines to describe the things they went through or committed. I am so honoured to have met them all.”

Co-director and choreographer of #whatnow is Amber Barton, who has been a featured performer at the Chutzpah! Festival.

“We’re living in a time of increased awareness and social justice,” said Barton. “For me, that means it’s important to keep our conversations, such as the ones around the #metoo movement, alive. #whatnow is a unique performance experience that helps us to continue these conversations. I feel so privileged to be part of this production and to be trusted with the stories that have been shared with us.”

#whatnow includes testimonials from survivors of harassment, misconduct and assault, as well as stories from those who took accountability for their harms. Throughout the piece, Barton has crafted ensemble movement that articulates tone, environment and viewpoints. The work also uses the format “headphone verbatim,” where edited audio interviews are played through headphones to actors on stage and the actors mimic and repeat what they hear, in real time. Every cough, stutter and hesitation is reproduced, and the actors never “memorize the lines.”

#whatnow features performances by Sabrina Symington, Yvonne Wallace, Patrick Dodd, Emily Grace Brook and Siobhan Sloane-Seale. Running time is approximately 80 minutes, with professionally facilitated conversations afterward. There are a few gender-specific performances, to allow for an honest and supported environment for audiences to respond to the performance with other people of the gender they identify as most. As well, there is ASL interpretation at the Nov. 7 show.

Tickets start at $15 and $2 from every ticket goes to Pacific Association of First Nations Women. The Oct. 28 preview is two-for-one. Visit alleytheatre.ca.