Deborah Willis became a writer, in part, because it is a way “to learn about the things that you’re curious about.” Irene N. Watts and Kathryn E. Shoemaker were motivated to reimagine a decade’s-old story in light of its relevance to pressing issues of today. And, in his latest work, Roger Frie found a way to discuss a past for which, previously, “the words were missing for how to speak about it.”

The Western Canada Jewish Book Awards, presented by the Cherie Smith JCC Jewish Book Festival, took place on April 26. Self-proclaimed book lover Daniella Givon, who is part of the JBF committee and was chair of the awards committee, introduced the evening.

“As I looked for ways to enhance the Jewish Book Festival,” she said, “I had a vision that book awards would marry the goals of the festival with the celebration of, and support the achievements of, local Jewish writers from Western Canada and showcase the winning authors. Since then, we’ve already gone through the process of bringing the ideas to fruition with the help of a subcommittee and the first round of awards … a beautiful ceremony was held here two years ago, recognizing five best-deserving authors.”

This year, four awards were presented, as chosen by the selection committee of former librarian Linda Bonder (Victoria); author and librarian Elisabeth Kushner (Vancouver); author and poet Dave Margoshes (near Saskatoon); writer, teacher and critic Norman Ravvin (Montreal); and Judith Saltman, professor emerita at the University of British Columbia School of Library, Archival and Information Studies. The winners were Calgary-based Willis for The Dark and Other Love Stories (Diamond Foundation Prize for fiction); Tilar J. Mazzeo, who divides her time between Maine, New York and Vancouver Island, for Irena’s Children (Pinsky Givon Family Prize for non-fiction); Vancouver’s Watts and Shoemaker for Seeking Refuge (Jonathan and Heather Berkowitz Prize for children and youth literature); and Frie, professor of education at Simon Fraser University and affiliate professor of psychiatry at UBC, for Not in My Family: German Memory and Responsibility after the Holocaust (Kahn Family Foundation Prize for writing on the Holocaust).

At the awards ceremony, each of the donors, or their representative, announced the winner of their sponsored award, which included a cash component. The winners – except for Mazzeo, who could not attend – read excerpts from their books and were interviewed briefly by Marsha Lederman, Western arts correspondent for the Globe and Mail.

Frie, who seven years ago discovered his maternal grandfather’s involvement with the Nazis, told Lederman, “This was a past no one had spoken about and, as I soon learned to understand, I think the words were missing for how to speak about it.” About the war in general, he said, his parents – who immigrated in the 1950s to Canada (Frie was born here) – talked about Germany’s responsibility for the Holocaust, however they did not speak about what his grandparents believed or what their involvement was in the war. He has found, in his research, that this “is a common dynamic amongst Germans in the postwar period.” He said that, while Germany has faced its past, “the emphasis on collective memory and collective understanding and collective responsibility has, in some way, allowed individual families to avoid confronting the past, and this book [Not in My Family] is very much a representation of that.”

“I knew nothing about Irena Sendler before I picked up this book, so this has been a gift,” she said. “Irena Sendler was a Polish woman who saved … thousands of Jewish children during the Holocaust with amazing feats of courage, often in the Warsaw Ghetto. Her story is incredible, this book is incredible, and I can only hope that Steven Spielberg gets his hands on a copy.”

Shoemaker gave a brief presentation on the creative process she and Watts went through to create the graphic novel Seeking Refuge, which is based on Watts’ book Remember Me (first published in 2000). And Watts spoke of the challenge of cutting 27 chapters down to nine. “What I had to keep in mind,” said Watts, “is you can get so carried away by cutting and changing the language to make it more dynamic that you lose the story a little bit, and I had to watch that I didn’t diminish the characters.”

About the cover of the graphic novel, which features a girl sitting on a suitcase looking forlorn, Watts said Shoemaker “told the story in that one image.” Later, in response to a question from Lederman, Watts said the current refugee crisis was “the major reason to bring this book back in a different format.”

As for Willis, she spoke with Lederman about her winning collection of short fiction. “I was writing the stories for about five years, and I actually started noticing that the word ‘love’ was coming up over and over again. I was at first a little dismayed by that because I was thinking, oh, love stories, that’s been done. But then I embraced it and I wanted to try and explore that theme in a way that was true to my esthetic, or my goals as a story writer. I set it almost as a challenge.”

After an open Q&A with the authors, JCC Jewish Book Festival director Dana Camil Hewitt wound up the event with thanks to the sponsors, judges, awards committee and audience. 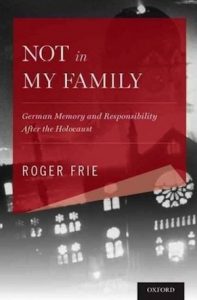