Claire Sicherman began writing Imprint: A Memoir of Trauma in the Third Generation after her grandmother passed away. (photo from VHEC)

Claire Sicherman’s grandmother didn’t share much about her experiences in the Holocaust. There were three stories – one about bread in Auschwitz, another about her tattoo, a third about washing – none of them overly traumatizing. It was in the silences, though, in what her grandmother did not share, that Sicherman sensed the deep trauma permeating her family.

“When I grew up, there was a constant heaviness that I couldn’t name,” Sicherman told the Independent. “I grew up knowing about the Holocaust but not really knowing too much about my family’s personal struggle with it, the stories.”

Her understanding of the Shoah came more from reading Anne Frank and watching Schindler’s List than hearing firsthand accounts from her grandmother.

These unspoken traumas, conveyed across generations, are what Sicherman will speak about at the High Holidays Cemetery Service, an annual commemoration presented by the Vancouver Holocaust Education Centre, Schara Tzedeck Congregation and Jewish War Veterans. The event takes place this year on Sept. 16, 11 a.m., at Schara Tzedeck Cemetery, in New Westminster. Her presentation is titled Honour and Remember: Breaking the Silence in the Third Generation.

Sicherman explored the topic in her book Imprint: A Memoir of Trauma in the Third Generation, which she began writing after her grandmother passed away. (See jewishindependent.ca/long-enduring-trauma.)

“After my grandmother died, it was safer to start uncovering the silences,” she said. “I think it’s much safer for the third generation to explore the stories of their families. For the second generation, especially for my mom, for example, there was this not wanting to hurt her parents.

“I experienced a bit of that when my grandmother was alive in that we just knew automatically not to ask certain questions, not to go there. For some of the second generation, the silence was a normal part of life. For others, the opposite is true. It was constantly talked about to the point that it became unhealthy that way. But, for my family, the silence was the norm. I think, in third generations, now you’re seeing more people wanting to talk about it, wanting to get back and explore the roots and figure out what they are carrying.”

Sicherman cites the relatively new science of epigenetics to suggest the weight of family history. As a response to that possibly inescapable legacy, Sicherman practises forms of yoga that release stresses in the body, journaling as a form of therapy and an Ayurvedic diet, which incorporates healthy foods and mindful eating rituals, all of which can potentially ameliorate the effects of inherited trauma.

Sicherman’s grandparents, who were from Prague, were the sole survivors in their respective families. They escaped communist Czechoslovakia in 1968 and settled in the Vancouver area. When Sicherman was 4 years old, her grandfather passed away. The cause of death, she was told, was a heart attack. In her 30s, Sicherman learned that her grandfather had committed suicide. This was another of the family’s secrets.

Despite the hidden past, Sicherman thought her family was entirely ordinary.

“For me, growing up, it was really normal,” she said. “I didn’t know that what my family went through, what I was carrying, what everyone was carrying and not talking about, was not quite normal. For me, I thought I came from a Leave it to Beaver kind of family.”

Sicherman’s dawning realizations of her family’s story and the weight of that history represent a sort of metamorphosis, she said. The cover of her book features a caterpillar, a cocoon and a butterfly.

“This sort of represents being third generation,” she said. “The symbolism around the butterfly is one of transformation and I feel, in writing this book, I was able to carry the story of my ancestors in a different way, and that’s where the transformation comes from.” 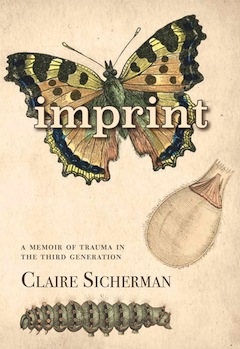