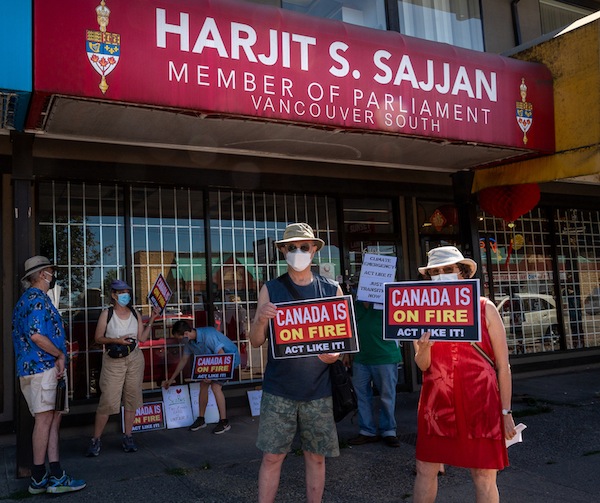 Or Shalom members Lorne Malliin and Marianne Rev organized a demonstration at the office of Harjit Sajjan, federal minister of national defence and MP for Vancouver South. (photo from Lorne Mallin)

The heat dome that sent much of British Columbia into an unprecedented spell of sweltering weather, followed by wildfires that have destroyed vast swaths of western North America, including the B.C. town of Lytton, and extreme weather events like Hurricane Ida have put climate and the environment at the top of many people’s priorities. With the federal election now days away, all federal parties have honed their pitches to voters on issues of the environment.

Jewish activists have been vocal on these issues recently, reflecting the growing realization that impacts of climate change are not a remote future potential but an immediate and measurable phenomenon.

Marianne Rev, a member of the tikkun olam committee at Or Shalom synagogue, was one of many Jewish people who participated in a series of demonstrations at the offices of scores of members of Parliament on July 29. With her friend and fellow Or Shalom member Lorne Mallin, Rev organized an event at the office of Harjit Sajjan, federal minister of national defence and MP for Vancouver South. Other local demonstrations took place at the offices of Vancouver Quadra MP Joyce Murray and North Vancouver MP Jonathan Wilkinson, who is also the federal minister of environment and climate change.

“It was part of an action organized by 350.org,” Rev told the Independent. The organization 350.org was founded in 2008 to build a global climate movement and was so named because 350 parts per million is the safe concentration of carbon dioxide in the atmosphere. (Concentrations are now 414.6 parts per million.)

While she was told in advance that Sajjan would not be available to meet on July 29, Rev was disappointed that, when her group of about 25 activists arrived at the office, it was closed. Nevertheless, she and a small group of others met with the minister on Aug. 9.

“We had an excellent meeting,” she said. “There were two very specific asks.”

Her group, as well as those participating across the country, asked MPs for a moratorium on all new or expanded production and transporting of fossil fuels, including the Trans Mountain Pipeline expansion. Second, they demanded a “just transition” away from fossil fuels to allow workers in those industries to shift to other sectors.

Rev said the response her group got from Sajjan was voiced by Wilkinson in the media.

“He blurted out the party line, which, shockingly, Wilkinson repeated many times over on the morning of the ninth, when the [Intergovernmental Panel on Climate Change] put out their report saying that we are code red for humanity,” she said. “[The government says] that we need the TMX to fund the transition to renewables. As such, it’s completely false.… It’s totally fallacious political B.S. that has been put out on the population for decades. Renewable energy is free. It’s not free to get there, but wind and sun is free.”

Rev gives credit to Adam v’Adamah, one of British Columbia’s pioneering Jewish environmental groups, and said that the environment and climate are logical concerns for Jews.

“Jews have always been very interested and driven regarding social justice, and the environment and climate are very much climate justice issues,” she said.

“I’ve been involved with [environmental issues] informally for my entire life, but formally, as a congregation, three years ago we launched an initiative to make clear that the climate and the environment is a Jewish issue,” he said. “I see it in very religious terms in the sense that we are commanded to be guardians of the earth, stewards of the earth. So, it’s a mitzvah, a religious obligation, to be good stewards of the earth. I challenged my congregation to join me in that effort and I challenged our Jewish community and they’ve responded, to put this on our community agenda, to see this as a pressing concern for the Jewish community and for the Jewish people. The Jewish Federation has an environmental task force now. We have been talking with CIJA [the Centre for Israel and Jewish Affairs] to get it on their list of priorities and to get the politics out of it and to see it for what it is, which is an existential threat to this world that we are commanded to be caretakers and stewards of.”

As Jewish voters ponder their ballot choices, Moskovitz has some thoughts.

“Rhetoric is lovely and nice and, for the most part, all the campaigns, as I hear them, say basically the right things about the environment,” he said. “But who is doing something or who is in a position to do something? The time for talking is over.… If you don’t do what you’re preaching or praying for, then it’s just noise and we can’t afford more noise because, if we’ve seen anything over this past summer, with the fires here and in the States, and, as we saw the impact of what staying home during the early part of COVID did for our environment in allowing it to rest and to have its own sabbatical year … we can see that we can’t keep using and abusing this God-given gift, which is the world we live in. We are just renters here. We don’t own it.”