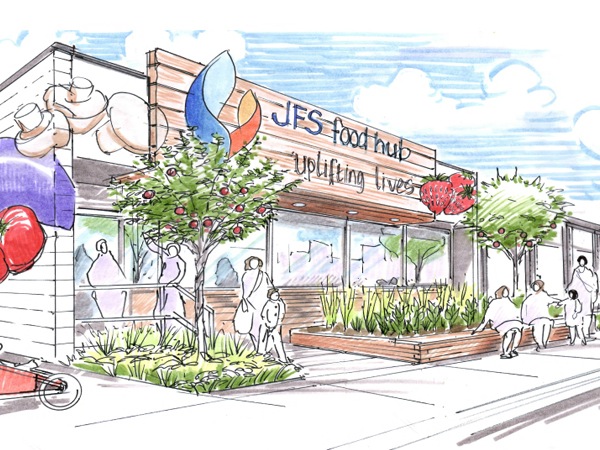 Plans are for Jewish Family Services to open a food centre in the Mount Pleasant neighbourhood this year. (photo from jewishvancouver.com)

The Tu b’Shevat More Than a Bag of Food program – a day of giving, of cooking and of education on food security in the age of COVID-19 – concluded with a panel discussion on the importance of good food, supply chain challenges, and the ensuing impacts and issues facing the Vancouver Jewish community.

The Jan. 28 program was presented by Congregation Beth Israel and Jewish Family Services (JFS), and the discussion event featured Mara Shnay, founding member and chair of the JFS client advisory committee; Cindy McMillan, director of programs and community partnerships with JFS; Dr. Eleanor Boyle, an educator and writer on food and health; Krystine McInnes, chief executive officer of Grown Here Farms, a company that supplies more than 1.5 million families with produce in Western Canada; and Dr. Tammara Soma, assistant professor at the School of Resource and Environmental Management at Simon Fraser University.

Moderator Bernard Pinsky began by highlighting the connection of the Jewish community and providing food. “Feeding the needy is an act of chesed,” he said.

“For people who are food insecure, it is not about having enough for food,” explained Shnay. “It is about not having enough money for anything – to buy a new pair of shoes, to replace a phone, to go to the dentist or to take one’s kids to the movies, and it is about living in that kind of poverty. In Vancouver, housing security is inextricably linked to food security. The income of many JFS clients is less than their rent,” she emphasized.

COVID-19 has exacerbated the circumstances of many JFS clients, particularly seniors, who are at higher risk of contracting the disease and, therefore, should refrain from using public transport or going to stores. Consequently, shopping has become increasingly expensive for them.

McMillan said the food needs within the Jewish community more than doubled in the past year, with children comprising 20% of those seeking food services. The number of Jewish families and seniors living in poverty has been rising for several years in the Lower Mainland, well before the pandemic started, she added.

To help combat the challenge, JFS will open an as-yet-unnamed food centre in the Mount Pleasant neighbourhood in the spring of 2021. “There will be a community kitchen, a place for social gathering, opportunities for general food knowledge, cooking classes, meals and a warehouse with increased storage for dry goods and perishables,” said McMillan.

The centre will also have a market-style food pantry for people to choose their food according to their customs and cultures, and the offerings will extend to outlying communities in the Greater Vancouver area through a pop-up van. The centre’s emphasis will be on supplying healthy food in a dignified manner to those in need, she explained.

Boyle spoke of food security in a wider sense – “We have food security when everyone is confident they can put adequate, healthy food on the table,” she stated.

There are systemic problems in Canada, she pointed out, as the country exports half the food it produces. “Food is treated like any other consumer good, like cars or shoes. It is run largely by private industry and, for business, social good is not a priority, profit is,” Boyle argued.

She advised involving government in the food industry, as is done in other sectors, such as education, transportation and health. More money, she suggested, should go to those who have trouble buying food, perhaps in the form of guaranteed income. The federal government could also pay farmers to grow certain amounts of healthy foods, like lentils, which would be available at below-market rates to everyone. This would in turn enhance food security and health for everyone with no stigma attached to buying this food; rich and poor would be paying the same price at the grocery checkout, said Boyle.

“There needs to be a shift from big agriculture to a more diversified local system,” she continued. “We created these current systems, and they should work for us. Change can happen. We will need to face down climate change and make food systems more sustainable,” she said, urging support for local food that is sustainably produced, as well as for people to waste less food and to eat a more plant-based diet.

McInnes elaborated on Boyle’s points by listing a number of problems in the supply chain, the agriculture and retail sectors, and government policy. “We are in a game in which corporate interests win and farmers lose, and consumers don’t understand that they are playing the card of the unwitting party that made it all happen,” she claimed.

Reeling off some concerning figures, McInnes reported that 85% of the space in grocery stores is controlled by four or five companies, that retail mark-up of local produce is 150% to 200% on average and that 92% of Canadian farmers do not have a succession plan.

Soma, meanwhile, spoke of food as spirituality and food as a right. She questioned, from an ethical perspective, the policies of big agriculture, which, for example, kills male chicks because they cannot produce eggs.

“Food as a right is not a secular concept, it is an act of spiritual justice to promote equity,” said Soma. “Food is a means of building relationships and a means of showing that you care and love someone.”

She added, “Without food security, we will not have peace and we will not have unity. The further the distance between the food and the one who eats it, the more the waste. There is a loss of connection.”

To watch the food security panel discussion or the Hilit Nurick and Rabbi Stephen Berger cooking session that took place earlier on Jan. 28 (and to download their red lentil soup recipe), visit bethisraelvan.ca/event/tubishvat5781.