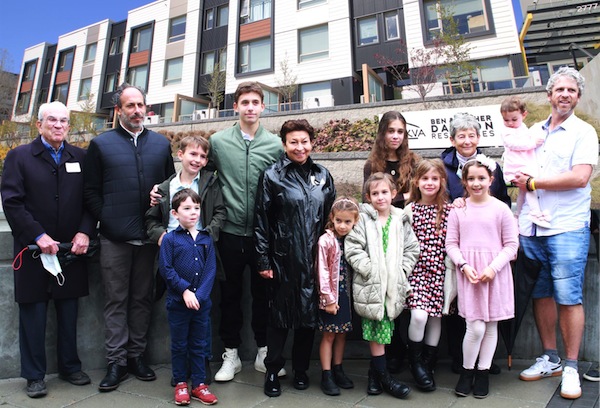 The Dayson and Barnett families were on hand to celebrate the opening of Tikva Housing Society’s Ben and Esther Dayson Residences. (photo from Tikva Housing)

Although the weather was not ideal, almost 100 people attended the opening of Tikva Housing Society’s Ben and Esther Dayson Residences on Sept. 26.

Due to COVID-19 restrictions, the event had to be held outside under tents. Rhonda Sacks, chair of Tikva, welcomed everyone and thanked the Ben and Esther Dayson Charitable Foundation and the Dayson and Barnett families for their ongoing generosity and support. She acknowledged the three generations of the Dayson and Barnett families who were present and the importance of the younger ones to witness this momentous occasion.

Sacks recognized the Jewish Federation of Greater Vancouver for understanding the immediate need for affordable housing in the Jewish community and thanked them for their leadership and advocacy. Ezra Shanken, chief executive officer of the Jewish Federation, brought greetings and reiterated the importance of not only saying thank you but also showing the younger generation how, because of their great-grandparents, the community is taking care of those in need of affordable housing.

Philip Dayson spoke on behalf of the family and mentioned that it was the desire of his mother, Esther Dayson, to help those less fortunate and to have a lasting legacy, like these townhomes.

Many of the residents in attendance took the opportunity to personally thank the donors and their families.

Hannah Amar, one of the residents at the Dayson Residences, spoke on behalf of the 32 families who live there. She spoke of the importance of having safe and secure accommodation, especially during COVID, and how grateful she is to Tikva and to its donors for her beautiful home.

This housing development is part of a partnership of the City of Vancouver and the Vancouver Community Land Trust; there were many donors and partners on the project.

More than 100 people live in the residences, including almost 60 children. As one of the residents said, “The sense of community and Jewish life is beyond what we could have imagined. We are so fortunate to be living here.”

The event also paid tribute to Susana Cogan, z’l, who was the driving force behind Tikva Housing from 2009 to 2017. Cogan was instrumental in developing these residences, as well as others that Tikva owns and/or operates. A commemorative bench in her memory sits adjacent to the children’s playground. 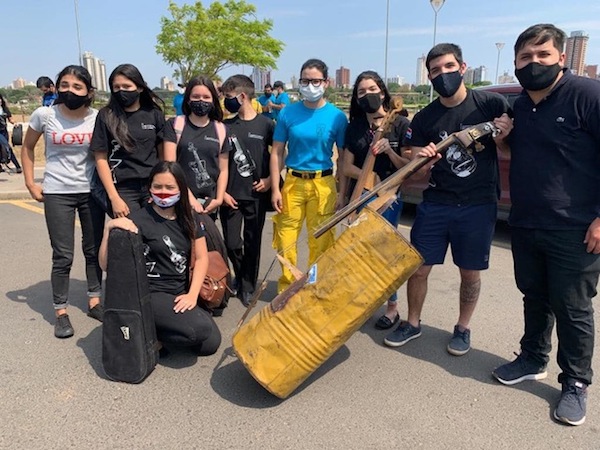 Members of the Recycled Orchestra of Cateura, Paraguay, are among those helping provide relief services during COVID-19 and after a devastating fire. (photo from IBB)

Times are tough for everyone, but that hasn’t stopped one Vancouver group from organizing an urgent fundraising drive to support an orchestra that is a testament to the transformative power of music.

Instruments Beyond Borders (IBB) is a registered Vancouver-based charity that supports music education in disadvantaged communities. The group is raising funds to support the Recycled Orchestra of Cateura, Paraguay (aka the Landfill Harmonic) as they are dealing with two major crises: not only the COVID-19 pandemic, but a devastating fire in the landfill, next to which they reside.

Since 2014, IBB has delivered donated instruments and funds to the Recycled Orchestra, which was borne out of a desire to teach music to eager children living in the marginalized landfill community of Cateura.

The Recycled Orchestra of Cateura is internationally renowned, performing all over the world with their instruments made out of recycled materials from the neighbouring landfill. They deliver a resounding message of environmental stewardship and hope and endurance in the face of poverty.

The pandemic has suspended the capacity of the orchestra to travel internationally – which was a major source of their revenue. Compounding the hardships wrought by the pandemic, the Cateura landfill recently suffered a major fire, resulting in the destruction of many of the orchestra families’ homes. Consequently, this has all but eliminated the opportunity of the parents to derive much-needed income from the gathering of saleable recyclables from the landfill.

In 2014, IBB donated $10,000 towards the building of a music school in Cateura. Fortunately, the school was not damaged by the fire, and today it is temporarily being used as a food relief centre – for the preparation and distribution of upwards of 5,000 meals daily to the devastated local community. Incredibly, the students of the Recycled Orchestra, along with the Orchestra’s Parents Association, have become the hub of relief services.

The IBB fundraising drive aims to assist the orchestra recover from these dire circumstances. To jumpstart this urgent appeal, the Ben and Esther Dayson Charitable Foundation has pledged to match the first $5,000 donated.

The Recycled Orchestra was the subject of an award-winning 2016 feature film Landfill Harmonic, the trailer for which can be watched on YouTube. Donations can be made at instrumentsbeyondborders.org.

Shirley Barnett, a longtime community activist and philanthropist, is to be honored by the Jewish National Fund at its annual Negev Dinner April 10.

“The Jewish National Fund is a strong organization that is entering a new stage of many joint ventures and many new directions and worthy of support,” said Barnett, who selected as the recipient project of the event a shelter for women and children fleeing domestic violence.

Jewish National Fund, Pacific Region, is collaborating with No to Violence Against Women, which was established in 1978 by Israel Prize laureate Ruth Rasnic, who is scheduled to be in Vancouver for the event.

The goal is to raise $1.5 million for the project, which will shelter 10 to 12 families at a time and provide victims of domestic violence with a safe environment from which they can start over. Staff and volunteers of the organization work with families to access therapy, secure income and new housing.

As many as 65% to 70% of women and children fleeing domestic abuse in Israel cannot access shelters due to lack of availability. Moreover, the shelters run by No to Violence Against Women are the only ones open to people of all religions and denominations, said Barnett.

The shelter, in Rishon Le Zion near Tel Aviv, will be named the Vancouver Shelter.

The cause is in line with Barnett’s lifetime work.

“I was involved in the women’s movement going way back to the ’60s,” she told the Independent. “I was on the board of directors of the Vancouver Status of Women in the ‘60s. I’ve always been aware of the lack of empowerment in women and the lack of women seeing their potential to be strong. And, when you’re abused, you need to develop the strength to be more resilient.”

Barnett said she knew she wanted to be a social worker from age 12. While at the University of British Columbia, she had the opportunity to work as a women’s matron at Oakalla prison in Burnaby.

“I was always interested in institutional work, I don’t know why,” she said. “I worked there for about half a year and then I did my fieldwork in juvenile probation.” She worked in other prison settings, as well as with people with addictions.

“More recently, I was on the board of the Odd Squad Society,” she said. “It’s a group of police officers who do gang prevention work in their off-hours.”

She also helped found Food Runners, now part of the Vancouver Food Bank. It is a program in which a refrigerated truck picks up surplus food from hotels and restaurants and delivers it to organizations that feed people.

After graduating with a bachelor of social work degree, Barnett worked for a federal agency setting up affirmative action projects for women and resettlement projects for Ugandan refugees.

As a volunteer, she served on the board of directors of the Jewish Family Service Agency for 12 years, including four as president. She also spent two years as the agency’s acting executive director. During that time, she founded the Hebrew Free Loan Association, which now holds more than $1 million in assets and has provided thousands of loans to people in need.

Barnett has also co-chaired campaigns for the Jewish Community Centre of Greater Vancouver (JCCGV) and the Jewish Museum and Archives of British Columbia (JMABC). She was the first president of Shalva, a facility in Israel for special needs children. She established a garden in Fir Square at B.C. Women’s Hospital and a unit for addicted mothers and their infants, a peer-to-peer coaching program at the UBC Counseling Centre, a pilot project at Vancouver Hospital for early intervention for depression in women, and led the restoration of the old Jewish Cemetery at Mountain View. She has advised the Aboriginal Mother Centre and currently serves on the faculty of arts advisory committee to the dean of arts at UBC, on the board of directors of the JMABC and on the Schara Tzedeck Cemetery board, and she is an honorary director of the Hebrew Free Loan Association.

With her brother, Philip Dayson, she administers the Ben and Esther Dayson Charitable Foundation, which provides philanthropic funds to local Jewish and other community causes, particularly in the area of non-market housing and rental subsidies for members of the Jewish community.

Barnett said that the shelter project in Israel is especially meaningful because it is supported by the JNF, a charity that her family has always supported.

“We grew up with the JNF in our house,” she said.

In addition to the latest honor from the JNF, Barnett’s contributions to the community have been recognized by the JCCGV, N’Shei Chabad and Jewish Women International, and she received the Gemilut Chasadim award from the International Association of Hebrew Free Loans.