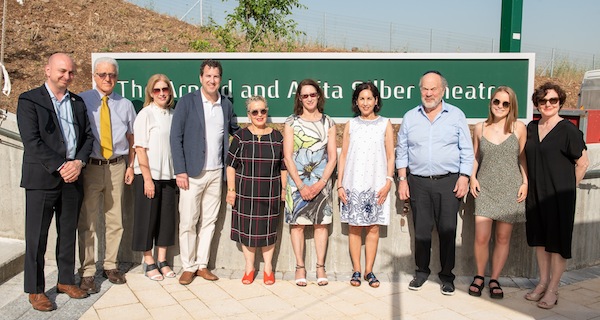 Fifth- and sixth-generation descendants prepare to enter the gates of the newly restored Jewish Cemetery at Mountain View. (photo by Robert Albanese Photography)

Several generations of Jewish life in Vancouver were represented Sunday afternoon at the rededication of the Jewish cemetery section at Mountain View Cemetery.

The historic burial site was first consecrated in 1892. In recent years, the site had deteriorated. There were more than 150 unmarked graves, many neglected headstones, pathways had eroded, hedges overgrown and the entryway had deteriorated.

Under cloudless skies, young children, all born more than a century after the first burial in the Jewish cemetery, assembled at the new entryway, joined by other generations of families with ancestors buried there, to officially open the gates of the rededicated cemetery.

The project, which took less than three years, was undertaken by a team of volunteers led by Shirley Barnett and assisted by the civic officials who run the cemetery, including cemetery manager Glen Hodges, with the support of the city, which owns Mountain View Cemetery.

Jack Kowarsky, chair of the Schara Tzedeck Cemetery board, noted that the City of Vancouver had given the Jewish community this parcel of land 123 years ago, before which Jewish bodies had been shipped to the nearest consecrated Jewish cemetery, which was across the water in Victoria.

The 450 Jews interred at Mountain View, Kowarsky said, represent the forefathers of the current community.

Raymond Louie, Vancouver city councilor and acting mayor, called the rededication an important day for the Jewish community but also for the City of Vancouver. He credited Barnett, Arnold Silber and Herb Silber for the progress made during two and a half years of work, and he reflected on Mayor David Oppenheimer, the city’s first Jewish mayor, who was pivotal to the creation of the Jewish part of Mountain View.

Louie said the day was an opportunity for Vancouverites to remember ancestors and celebrate our multicultural heritage.

Barnett, who was presented with a book documenting the work that took place, deflected attention to others in the audience, noting that a single individual – Cyril Leonoff – led the community’s fight in the late 1960s, when the city attempted to remove all upright headstones and replace them with flat ones to make maintenance easier.

Barnett expressed gratitude for the happy coincidence that both Bill Pechet, a world leader in cemetery design, and Cornelia Hahn Oberlander, a globally recognized landscape architect, are both Vancouverites.

J.B. Newall Memorials, a memorial and monument company that is also a preeminent headstone restoration company, Barnett said, generously donated a headstone for the previously unmarked 1892 gravesite of the first interment in the cemetery, as well as refurbishing many headstones.

Arnold Silber brought laughs to the audience when he referenced Barnett’s reputation for getting things done. He reflected on the phone call from Barnett three years earlier asking him what should be done about the poor state of the cemetery where her grandfather is buried.

Silber told Barnett that “we would do everything she wanted – as long as she would be in charge.”

Silber stressed that the Jewish cemetery at Mountain View has an inclusive mandate that “any Jew, regardless of their affiliation, can be buried here at Mountain View.” He added that, now that the renovation and rededication have taken place, funds are being raised for perpetual maintenance and protection of the site.

“All generations to come will understand the value of this great Jewish cemetery,” he said.

With the renovation, several new plots have become available.

Rabbi Andrew Rosenblatt and Cantor Yaacov Orzech provided an indication of what the original dedication ceremony might have been like in 1892. At the time, the rabbi said, those assembled would have proceeded seven times around the cemetery as part of the consecration process but, he noted, the size of the assembled people Sunday did not permit such a procession.

The cantor offered some of the prayers that would have been included in that ceremony 123 years ago, including the prayer accompanying a casket to the gravesite.

Rosenblatt noted that the rededication was taking place on Pesach Sheini, a day specifically created, according to rabbinical interpretation, so that those who contract ritual impurity by caring for the deceased should be able to nevertheless celebrate the joy of Passover.

After the generations of descendants of those interred in the burial ground passed through the gates, followed by scores of rabbis, cantors, city councilors, an MP and community leaders, two headstone unveilings took place, one for “Baby Girl Zlotnick,” who died in 1920, and another for Otto Bond, the previously unmarked grave of the first individual interred there.