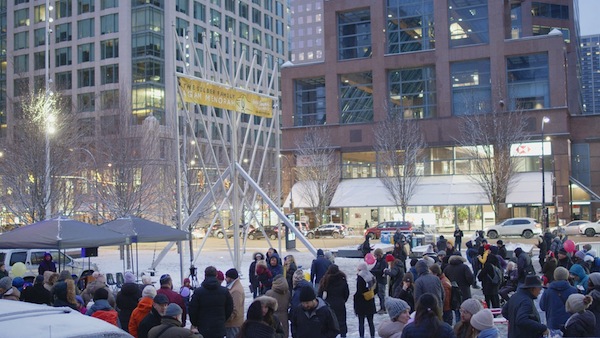 In some places in the world, the sun shines on Hanukkah. It’s warm and inviting, and people gather at the lighting of a public menorah. But the real measure of a community is when hundreds turn out despite the cold and snow, to celebrate Hanukkah in a spirit of camaraderie and festivity. Such was on the first night of Hanukkah in Vancouver, when several hundred people came to the Vancouver Art Gallery Plaza to participate in the annual lighting of the Silber Family Agam Menorah.

Members of Parliament, of the legislature and of city council brought greetings from their respective governments. The current patriarch of the Silber family, Arnold Silber, delayed his vacation to warmer climes in order to be at the ceremony. His son, Steven Silber, spoke on behalf of the family, and noted that this year marked exactly 95 years since the family’s former patriarch, the late Fred Silber, landed in Canada from his native Poland, with almost nothing to his name. He built a beautiful family and a legacy to the Jewish and wider community.

Rabbi Yitzchak Wineberg, executive director of Chabad Lubavitch of British Columbia, noted in his short address that the lesson of Hanukkah did not lose its impact on Fred Silber. The Maccabees were very small in number, against a mighty army of the Assyrian Greeks, who were well versed in the art of war. Hanukkah teaches us never to be deterred by challenges. Fred Silber may have arrived here with little but he left this world having left much for future generations.

Rabbi Dovid Rosenfeld read a letter from the Lubavitch Rebbe (Menachem Mendel Schneerson) z”l that explains the importance and value of public menorah displays, and the attendees enjoyed a choir performed by students of the B.C. Regional Hebrew Schools, of which Rosenfeld is a co-director with his wife, Chaya Rosenfeld.

Chabad Lubavitch BC gratefully acknowledged the support of Arnold Silber in making this event possible. 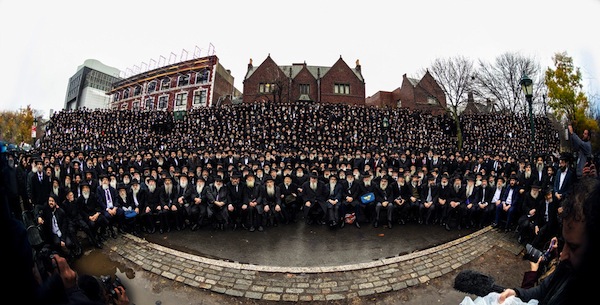 The 2019 “class photo” of Chabad shluchim who attended the Kinus Hashluchim in New York. Among the 4,000 Chabad emissaries attending were 14 from British Columbia. (photo from Chabad-Lubavitch)

Fourteen B.C. Chabad emissaries (shluchim), including one from Victoria and one from Nanaimo, recently converged on New York City for the annual five-day International Conference of Chabad-Lubavitch Emissaries (Kinus Hashluchim), which brings together shluchim from more than 100 countries around the world and other Jewish communal leaders, almost 6,000 people.

The Kinus Hashluchim reflects directly on the influence of the Rebbe, Rabbi Menachem Mendel Schneerson, z”l, leader of the Chabad movement, who, decades ago began sending young Chabad couples to far-flung corners of the world to serve and, in some cases, build Jewish communities. The shluchim, or Rebbe’s Army, now comprises 5,000 Chabad couples worldwide. The newest shluchim just established a Chabad centre in Kigali, Rwanda; one in Myanmar; and one on the Caribbean island of Turks and Caicos.

The November Kinus conference focused on the work that has been accomplished. “It’s an opportunity for shluchim to share the various challenges they encounter and the countless accomplishments they achieve. We get a chance to share ideas, inspiration and guidance not only from the Rebbe’s teachings, but from each other. And these enable us to go home spiritually refreshed and ready to implement new things,” said Rabbi Yechiel Baitelman, director of Chabad Richmond. “We definitely gain strength from each other, and our challenge is to celebrate and share Judaism with joy, and to continue optimistically and positively empowering Jews around us.”

During the five-day gathering, the shluchim participated in seminars and workshops on combating antisemitism, inspiring pride in the Jewish people, and much more. They also engaged in study, prayer and celebrations, including a gala dinner. The spiritual high point took place on the Friday, Nov. 22, when shluchim visited the Ohel, the Rebbe’s resting place. Thousands of emissaries waited in line to deliver handwritten notes and prayers to the grave.

“It’s an opportunity for us to rededicate ourselves to the Rebbe’s spiritual and social vision for the world,” said Rabbi Yitzchak Wineberg, director of Chabad Lubavitch of British Columbia. On Shabbat, shluchim and lay leaders spent time learning and praying in Brooklyn’s Crown Heights neighbourhood, which houses the worldwide headquarters of the Chabad Lubavitch movement at 770 Eastern Parkway. They also took part in farbrengens (traditional Chassidic gatherings). On Sunday, the annual “class photo” of more than 4,000 shluchim took place at Chabad headquarters.

The Sunday evening gala, which Baitelman described as “vibrating with uncontainable energy, renewed enthusiasm and an undeniable sense of mission,” was held at the New Jersey Convention and Exposition Centre. Emcee for the evening was Rabbi Moshe Kotlarsky, vice-chair of Merkos L’Inyonei Chinuch, the educational branch of the Chabad movement. He spoke of the challenges Chabad emissaries encounter in their work, and praised them for their enthusiastic and unflagging commitment to making a difference in the world.

The gala’s keynote address was given by U.S. Ambassador to Israel David Friedman. He related that he has been Torah study partners with a Chabad rabbi in Woodmere, N.Y., for more than two decades, and said that helped prepare him for his current role as ambassador to Israel.

Many of the gala’s speakers emphasized how shluchim are deeply connected to Jews in every part of the world, and that each individual Jew is important to them. Rabbi Yitzchak Schochet, a Chabad emissary from Mill Hill Synagogue in London, England, said: “Ask yourself, where would the world be today without the Rebbe’s vision? Who else goes looking for Jews all around the world, in every corner of the world?… What would have become of [Jews] were it not for the unconditional devotion of every shaliach and shalucha?”

The gala wrapped up with the annual “roll call,” at which Kotlarsky read out the names of the countries that have permanent shluchim. The evening ended with dancing and singing. For those who are interested, the banquet was livestreamed by chabad.org at tinyurl.com/twu2x7z.

This year’s Gold Plate Dinner marks 40 years that Lubavitch B.C., led by Rabbi Yitzchak Wineberg, third from the right, has been in Vancouver. (photos from facebook.com/LubavitchBC) 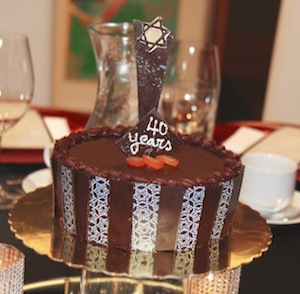 Chabad Lubavitch BC held its 39th Annual Gold Plate Dinner, paying tribute to the Rebbe, his vision and 40 years in British Columbia on Dec. 2, at Schara Tzedeck Synagogue. Guests enjoyed a reception, followed by a five-course meal, during which several speakers shared how Chabad Lubavitch has impacted their lives. Throughout the evening, several prizes were raffled, including hockey tickets, vacation packages, 40-year-old scotch and the grand prize of a 2014 BMW i3. The evening concluded with an entertaining performance by comedian Marc Schiff.

For more photos of the event, visit facebook.com/LubavitchBC; for a video, youtube.com/watch?v=gzWVr9iVY-g.