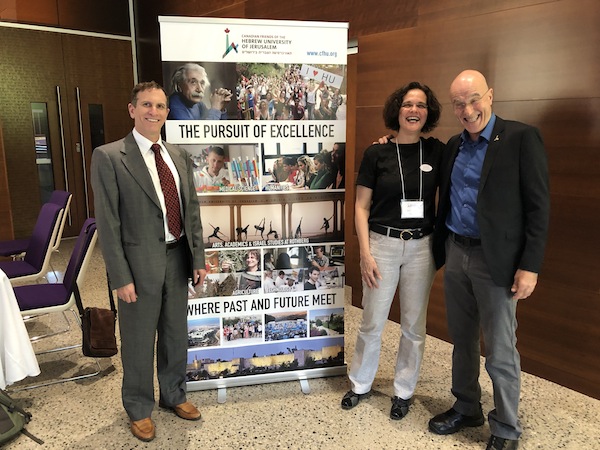 The happiest time in the average person’s life is when the last grown child leaves home and the dog dies. That was the tip of the iceberg in happiness advice from one of world’s foremost experts and researchers on the subject.

Prof. Yoram Yovell, a psychiatrist, brain researcher, psychoanalyst, author and media phenomenon in Israel, spoke to an overflow crowd at Beth Israel Synagogue July 25. An associate professor in the division of clinical neuroscience, Hadassah Ein Kerem Medical Center, at the Hebrew University of Jerusalem, Yovell is author of two bestsellers: Brainstorm and What is Love? He hosted the award-winning primetime TV show Sihat Nefesh (Heart-to-heart Talk) for 10 years. His visit was presented by Canadian Friends of the Hebrew University of Jerusalem and made possible by the Dr. Robert Rogow and Dr. Sally Rogow Memorial Endowment Fund in Support of Academic Lectures.

Yovell speculated that the audience was so large because of a sad fact about Vancouver.

“Now I understand why all of you are here,” he said. “I didn’t know this before I came here – you are considered to be the unhappiest city in Canada.”

He supposes this status might have to do with the combination of rainy days and the proportion of new Canadians, because “immigrants, for very important reasons, happen to be less happy than people who live in the same place where they were born,” he said.

But advancing happiness (or ameliorating unhappiness) requires us to define it, he said. He asked the audience to raise their hands if they were happy – most did – but then he demanded to know how they knew they were happy.

Aristotle, who wrote a lot about happiness, differentiated hedonia, pleasure, from eudaimonia, a much more complex concept that has more to do with achieving one’s potential in every aspect of our lives.

Instead of asking, “Are you happy?” Aristotle would ask, “Are you the best doctor you can be, the best husband, the best parent?”

Yovell said, “And, if the answer is yes, or almost yes, to most of those questions, then, for Aristotle, I’m eudaimonia and he doesn’t care how I feel.”

Tal Ben Shahar, an Israeli who wrote the book Happier about 2,400 years after Aristotle’s ponderings on happiness, developed a simple equation: happiness equals pleasure plus meaning. This dictum is, Yovell said, the only thing that every school of philosophy and every religion agrees on. Pleasure does not equal happiness. Meaning is the additional ingredient that turns fleeting pleasure into lasting happiness.

“The contribution of pleasure to happiness is there, but it’s small,” said Yovell. “And what’s even more important is it does not last, whereas the contribution of meaning to our happiness is huge and it’s stable. That makes an enormous difference to how we should conduct our lives if we want to be happier.”

One example he discussed was a study showing that most parents say, in retrospect, that child-rearing is the thing that made them happiest. But ask them when they’re changing diapers, doing laundry or settling squabbles, and they’ll tell you their happiness level is in the basement.

“It doesn’t really matter what you felt in the meantime,” he said. “What matters is what is kept in your memories. We live in our memories.”

Having children, for most people, is the most meaningful thing they’ve ever done, said Yovell.

Still, the road to happiness can be arduous.

“If you take a regular couple and ask, ‘When are these two people going to be at the top of their marital happiness?’ the answer is a short time after they get married and, with every child they have, their level of happiness decreases. And when their first child hits adolescence …” at this point his words were drowned out by the laughter and applause of the audience. “You know what I’m talking about, right?” he said.

“But there is light at the end of the tunnel,” he continued. “For those of us who manage to bypass this ‘Death Valley,’ there is going to come a time in our marital life where our happiness level [improves]. The vast majority of you are going to get happier … the older you become, the happier you’re going to be.”

A study of 340,000 American men and women looked at the correlation between their well-being and their age.

“At 18, they’re pretty happy – before they’ve realized what’s going to happen,” said Yovell. “Soon, they go off to college and there goes their happiness and they keep going down and down and down and it gets worse and worse and then they hit rock bottom here, in the 40s and 50s,” he said, pointing at a slide on the projection screen. “But, it gets better as they get older, sicker, less attractive, closer to death – and happier.”

Yovell’s academic work has often focused on reducing extreme unhappiness so that, for example, suicidal people are improved enough to be brought back from that brink.

He cited Sigmund Freud, a founding board member of Hebrew University, noting that “many things that Freud hypothesized were proven wrong, but many were proven right.” One example, he said, was Freud’s observation in his first book that “Much will be gained if we succeed in transforming hysterical misery into common unhappiness.”

The science of happiness has advanced dramatically in just the past two decades, Yovell said. We now know that the parts of the brain that register physical pain overlap with those that register emotional pain.

“This is something that 20 years ago we knew absolutely nothing about and now we do. In the last two decades, we’ve gradually learned that it is true that mental suffering is encoded in our brains using the same neural pathways, the same neurotransmitters that also mediate the extremes of physical pain.”

If you ask a friend about the most painful thing they’ve experienced in their life, they are unlikely to tell you about a ski accident or an operation, he said.

Similarly new research indicates that emotional pain is something we can quantify, that it is more than subjective. With this knowledge, Yovell said, the follow-up question is: “Can we make it better and, if so, how?”

In 2014, a study looked at the relationship between happiness and genetics and concluded, the professor said, “that our genetics do influence our happiness but they are responsible for about 32% of our happiness, which means that 68% of our happiness – more than two-thirds of how happy or unhappy we’re going to be – has something to do with us. Part of it is the circumstance into which you were born, but the rest is how we conduct our lives – both our real lives out in the world and our inner world, our mental lives. This is what we have to work with and that ain’t bad.”

Yovell described a study of university students, in which a control group was given a placebo and another group regular-strength Tylenol and participants were then asked to journal about how they felt with their ongoing lives on campus.

“Those who got Tylenol instead of placebo actually experienced those mental pains to a lesser degree,” he said. “That’s nice, but that ain’t going to do the job when things get more difficult when someone, God forbid, loses a spouse or when someone sinks into a big depression. Tylenol will not be the answer. But what about opioids? What about narcotics? What about those drugs that mitigate the effects of endorphins. Do they make mental suffering better? And, if so, at what price?”

Opioids were used in the treatment of depression for at least 100 years, he said, between the mid-19th and mid-20th centuries.

“Drugs like morphine and codeine were the first drugs of choice in the treatment of mental depression and they actually worked,” he said. But the problems were threefold. These drugs induce tolerance, meaning a patient has to increase the dose in order to achieve the same effect. Narcotics or opioids also cause addiction and that’s a huge problem. And they are easy to overdose on.

Recently, scientists have begun investigating the use of the opioid buprenorphine.

“It’s less addictive and it’s much less dangerous in overdose because, if you give it in high doses, it actually blocks its own effect, so it’s very, very hard to overdose on,” Yovell said. “Even though it’s 40 times more potent than morphine, it’s actually a lot less dangerous to overdose and also less addictive.… We took people in Israel who are not only incredibly depressed but also suicidal. In addition to existing treatments for their depression and suicidality, the experiment added buprenorphine to their regimen.… Those who received the active drug, unbeknownst to them and to us as well, continued to improve. So there is hope, which is very nice.”

A drug-free way to marginally increase one’s happiness, he said, is simple goodness, generosity and philanthropy. Making others happy makes us happy, he said.

“People who contribute their time and money, who volunteer, will not only be happier, they will live longer,” he said. He then directed audience members to donation forms on their tables and asked them to consider contributing to scholarships for graduate students who are working with him.

“I leave it up to you,” he said, “whether you want to save your lives.”

Summertime and the living is easy! Of all the seasons, probably summer is most closely associated with happiness. Vacation, camping, family time, celebrations, picnics: these are activities that we associate with happiness.

In Western culture, individual happiness is often considered the primary goal of life. What parent hasn’t begun a sentence with, “As long as you’re happy…”? In many other societies, happiness is subordinated to family needs, communal obligations or other less individualistic pursuits. But the pursuit of happiness has a long history in Western culture, codified most notably in the United States Declaration of Independence as an “unalienable right.”

Most of us probably enjoy our happiness without overthinking it. But an Israeli guru of happiness will be in Vancouver later this month and he has thought a great deal about the subject.

Prof. Yoram Yovell is a brain researcher, psychiatrist and psychoanalyst with a PhD in neurobiology. He is the author of bestselling books and is a regular face on Israeli TV.

The United Nations ranks countries on a scale of happiness, topped by the Scandinavian countries, Switzerland, the Netherlands, Canada, New Zealand, Australia – and then Israel.

For people who have not been to Israel or who lack an understanding of its culture, it may be a surprise to find that a country whose history has been so wrapped up in violence and conflict would produce a population that is collectively as happy as almost any society in the developed world. There is, however, an explanation.

Stability, basic freedoms and an economy that allows for individual financial comfort or success are among the baseline requirements for societal happiness, notes Yovell. Things like clean water, a social safety net and an effective, accessible healthcare system are also on the list. In many cases, it is also critical to have a sense of cohesion and shared purpose.

While Israelis may no longer be as united as they were in the days of the early chalutzim, the requirement of military or national service plays a factor in building social cohesion and making individuals feel part of a larger whole. For many, the ability to live in the world’s only Jewish state is another factor that leads to shared purpose and, indirectly, to happiness. (It is worth noting that, although Israeli Arabs report being less happy than Jewish Israelis, their happiness levels are higher than Arabs in neighbouring countries.)

Economic challenges in Israel – inflation, high cost of living and such – do not ultimately have a huge influence on happiness levels, Yovell maintains. Once the most basic needs are met, incremental differences in income or GDP have little impact.