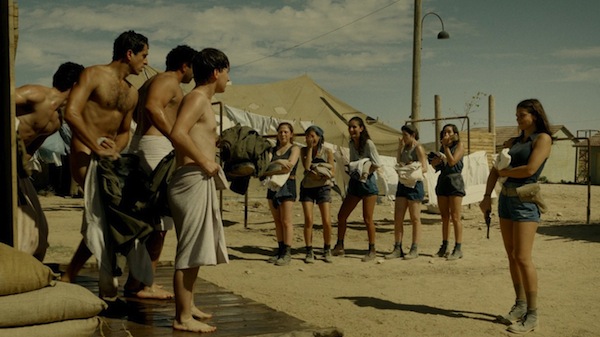 A still of one of the humorous (and relatable) moments in Image of Victory, which is part of this year’s Vancouver Jewish Film Festival.

The Vancouver Jewish Film Festival opening night film is the epic Image of Victory, directed by Avi Nesher. It’s not with grandiosity that the movie leaves its mark, though there is some of that, but rather with the quiet moments of humanity it so movingly depicts.

Sombre piano music over which one can hear missiles flying, bombs exploding, wind blowing are heard as the initial credits are shown, modest white lettering on a black background, nothing showy. “There are moments when you try to make sense of your life,” begins the narrator, as black-and-white footage of a shot-out building appears, then a jeep, soldiers with rifles pointed, tanks. “You wonder if you made good use of the time God gave you on this earth. You seek someone to compare yourself to. Someone you think truly lived.”

For Egyptian journalist and filmmaker Mohamed Hassanein Heikal, that person is Mira Ben-Ari, though he doesn’t know her name or anything about her at the time. It is the image of her from decades ago that he cannot forget – battle-worn, staring down the Egyptian forces, she smiles, she takes out a gun and shoots. Cut to an older Hassanein, in his study, depressed and angry, watching the TV news about Israel and Egypt’s peace agreement, after decades of war. Was all the fighting and all the death it caused in vain? He blames himself for not having the courage to expose Egypt’s president as a traitor for making the peace deal. He idealizes Mira’s bravery and purpose, thinks back to when he was 24, and fearless – when he was assigned to document Egypt’s military operations against the soon-to-be-reestablished Jewish homeland.

Inspired by the Battle of Nitzanim in June 1948, in which the kibbutz was destroyed by Egypt, Image of Victory imagines what it might have been like on both sides of that conflict. Both Mira and Hassanein are based on real people, as are other characters in the film, and this movie is about a near-mythological event. The voiceover, the black-and-white footage, the fancy costumes of New Year’s Eve revellers in Cairo, idealistic kibbutzniks, zealous army commanders. Any one of these elements could have slipped into a larger-than-life portrayal, but director Avi Nesher shows restraint – and a valiant attempt at balance that has an air of realism, though the kibbutzniks are admittedly more developed entities.

The majority of the film takes place in chronological order, six months out from the battle. When we first see the kibbutzniks working the dusty land, they are doing so under occasional fire from the Egyptian farmers who were displaced after their landlord sold said land to the Jews. The rules of engagement are fascinating. After one altercation, the Egyptians yell to the kibbutzniks that they are all done on their side, and the Jews cease their fire so that both sides can safely collect their wounded and dead.

In the midst of the tension, life goes on in the kibbutz – there are broken hearts and newly starting relationships, there is joyous singing, dancing and piano playing, there is hard labour, there is frolicking on the beach. But underlying all the apparent normality is the hyper-reality of mortality, both because many of the residents and their recently arrived Haganah protectors are Holocaust survivors, as well as the threat of Egyptian attack. As one young soldier tells Mira, “You’d think it’s paradise if being here wasn’t risking death.”

After a brutal attack on a truck carrying supplies to the kibbutz, the Egyptian commander doesn’t want Hassanein to film the emptying of the truck of its supplies because it looks like they’re stealing. Perception is Hassanein’s constant battle – what he is being told to film and what he really wants to film. For example, during a lull in the fighting, he makes a film about two Arab villagers falling in love, which is trashed by the producer who hired him. People don’t want to watch that, yells the producer, they want war.

After the Egyptian forces are repelled by the newly declared state of Israel, Hassanein is ordered to film an Egyptian victory, so that King Farouk can save face. The enormity of the Egyptian army descends on Nitzanim, which Israel’s leaders – for ideological reasons encapsulated by the character of (real-life) commander Abba Kovner – have abandoned.

While the kibbutz’s children (including Mira’s young son) and some of the adults were evacuated or assigned to other defence tasks, the rest of the residents and soldiers were left to fend for themselves, vastly outnumbered. The real-life outcome is known: more than 30 kibbutz members and soldiers were killed, more than 100 taken prisoner. What Nesher’s film offers is an idea of the ambitions, the loves, the fears, and more, of some of those who were at the ground level, caught in a situation not entirely of their making.

The acting is phenomenal – adeptly showing the interplay of diverse characters, with their own senses of humour, their own past traumas, their own desires, their own measures of victory. The characters are more than stereotypes and the stories more nuanced than the ones we most often hear. Nesher wants us to be skeptical of national mythologies and of the media that help propel these misleading views, yet respectful of one another’s narratives, as complicated as they may be and no matter how divergent they may be from our own. It’s perhaps an impossible ask, but some ideals are worth dying for – or are they?