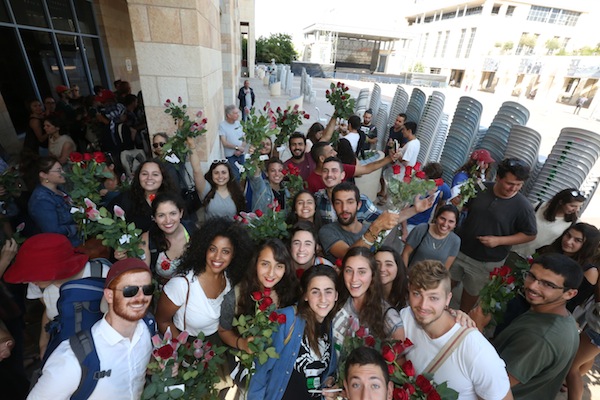 One of Tag Meir’s annual events is Flowers of Peace. Participants hand out roses on the streets of the Old City in Jerusalem on Jerusalem Day. This year, they gave out some 2,000 flowers as a message of peace to Muslims and Christians in the city. (photo from Tag Meir)

Tag Meir, which started in 2011, is operated by members of the same segment of religious Zionistic Judaism that started price tagging (attacking Palestinian property and people) in 2009. Members of Tag Meir started visiting victims on both sides of the conflict in an effort to show solidarity and repair physical and psychological damage.

Today, Tag Meir is supported by many organizations and institutions in Israel from all segments of Jewish society – secular, Reform, Conservative, Orthodox and ultra-Orthodox Jews – coming together to stand against hate and intolerance.

Though he now lives in Rehovot, Gvaryahu still considers Jerusalem home. He is the eighth generation of his family to live there.

Gvaryahu was deeply affected by the assassination of Yitzhak Rabin and the fact that the killer had come from his segment of religious Zionism, Kippot Srugot (Knitted Kippot). He decided he had to put his passion for helping animals aside – he is a farm animal behavioural researcher by training – to find ways to mend Israeli society.

“I decided it’s about time to be more involved in public business – not politics, but more education,” said Gvaryahu. “Me and a few other families initiated a synagogue, an Orthodox synagogue in Rehovot, named after Yitzhak Rabin.”

Gvaryahu realized there was something wrong with the education system when he received a call from the head of his son’s yeshivah, demanding his son apologize for an outburst.

“Six months after Yitzhak Rabin’s assassination, a famous rabbi came to my son’s school,” recalled Gvaryahu. “He said that now, with Rabin dead, all his bad things were forgiven. And he didn’t even mention that he was murdered. He just treated him like someone who’d sinned a lot, talking to the whole synagogue, like 400 students, including the head of the synagogue … and they were all silent, except one person – my son.

When the rosh yeshivah called, Gvaryahu commended his son’s actions and said, “This rabbi should apologize. I’m not going to ask my son to apologize.”

Eventually, they consulted a leading rabbi who declared that Gvaryahu’s son “did a wonderful job and there’s no reason for him to apologize.”

It was at that point that Gvaryahu decided they needed to start their own school.

The first time that Israelis heard the term “Price Tag” in the context of payback was in December 2009. It was dubbed so by a small group of extreme right-wing West Bank settlers who had begun indiscriminately attacking Palestinians.

Gvaryahu explained the psychology behind it: “Something happened to us by Palestinians, by the army, by politicians, whatever … someone will pay the price. The thinking is, we don’t care that you’re innocent, we don’t care that you are Christian, Muslim…. You’re not Jewish, you’ll pay the price. We’ll burn, damage your mosque, your house, your car, your olive trees, and that’s called, ‘Price Tag,’ happening almost daily in the West Bank. Most of them, we don’t hear about. But, after a terror attack by Muslims, unfortunately, we have a bunch of them in the last two months … there’s been attacks by extreme settlers.”

While Tag Mechir destroys, Tag Meir aims to rebuild and bring light. “So, we call the people, the victims, in hospitals, villages, wherever, mosques, monasteries or churches, and we create a solidarity visit,” said Gvaryahu.

“Over the years, we’ve gained many, many Jewish, Christian and Muslim friends, and that’s very important. It’s important, because it’s a correct response to that crime, because they want to create terror or fear, especially among Muslims and Christians. So, those visits strengthen the relationship between Jews and Muslims and Christians. We have three Facebook pages – one in Hebrew, one in Arabic and one in English – with 35,000 followers.”

People in Israel not connected to Tag Meir have started solidarity visits by themselves, aiming to mend fences with Palestinian neighbours. “First, you know, I’m happy about Tag Meir,” Gvaryahu said about this development. “Second, that they get that this is the right way to respond to a hate crime or a price tag attack – it’s wonderful. It’s what we want to happen.

“This isn’t something that can be solved quickly. It’s education. We try to educate society, especially the Zionist society, we hope.”

This year, due to the rise in Tag Mechir attacks, Tag Meir held an education symposium on Sept. 10 at the Van Leer Jerusalem Institute, near the home of the president of Israel, Reuven Rivlin. Among the speakers were the former head of the Israeli security agency, Shin Bet, Yaakov Peri, senior rabbis from different segments of society, and the mother of one of the Jewish victims of terror, Sarah Rosenfeld.

“Her son [Malachi Moshe] was murdered and she will give her strong condemning opinion about ‘price tag,’” said Gvaryahu prior to the symposium. “When we came to visit the Rosenfeld family, she said that, if Malachi would be with us, he would join Tag Meir.

“This is very unique about Tag Meir, that we visit both settlers and victims of Tag Mechir on the Palestinian side. It’s not that pleasant an activity sometimes, but we feel it’s very important.”

One of the yearly events Tag Meir hosts is a flower giveaway called Flowers of Peace. They go out into the streets of the Old City in Jerusalem on Jerusalem Day and hand out roses. “This year, we spread 2,000 flowers all over the Old City,” said Gvaryahu. “It’s a symbolic act, sending a message of peace to Muslims and Christians in Jerusalem.”

While Gvaryahu said 40% of the people in Jerusalem are Muslim, Jerusalem Day is only celebrated by the Jewish population. He said some of the songs that are traditionally sung must irritate the Muslim population. “Unfortunately, we don’t celebrate it, in our opinion, in the right way,” he said. “We just march with Israeli flags from West Jerusalem to the Western Wall through the market. Not all the songs are horrible, but a few of them are. So, this is our response. We march with Flowers of Peace.”