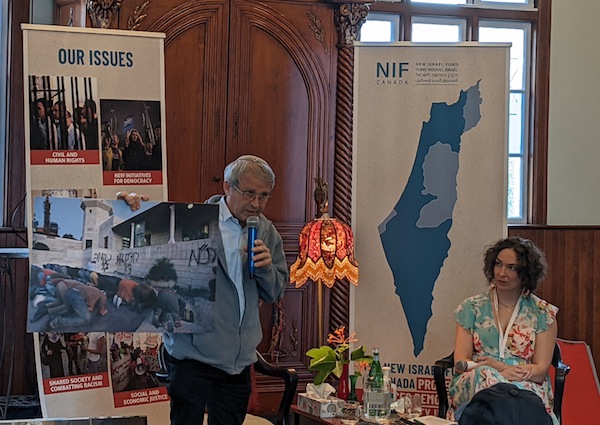 Dr. Gadi Gvaryahu, chair of the Israeli anti-racism organization Tag Meir, addressed live and Zoom audiences last month in a talk organized by the New Israel Fund of Canada and hosted by Or Shalom Synagogue.

At the event, titled An Israel at Peace with Itself: Solutions to Racism and Inequality, Gvaryahu described his early efforts in social activism, which began after Yitzhak Rabin was assassinated in 1995. “The fact that a religious person with a kippah on his head decided to get rid of our prime minister was a crucial point for me,” he said.

Gvaryahu established the nonprofit Yod Bet b’Heshvan (12 Heshvan, named for the date of the assassination on the Hebrew calendar) and the Yitzhak Rabin Memorial Synagogue in Rehovot, where he resides.

According to Gvaryahu, the creation of Tag Meir came about in 2009, following an escalation of racist rhetoric and acts on the part of far-right religious groups in Israel. Tag Meir is a play on words in Hebrew related to tag meicher, or “price tag.” Since the early 2010s, a small percentage of extremist settlers has carried out attacks against Arabs, meant to show the Israeli government “the price” of failing to support their cause.

“Tag Meir, on the other hand, means ‘light tag.’ We try to bring light into the world,” Gvaryahu said. “If there is a price tag attack, we want to be with the victims. We don’t distinguish if they are Jewish victims or Muslim victims. It is crucially important to be with them. We tell them they are not alone and support them.”

Gvaryahu gave several examples of Tag Meir’s work. One followed the July 2014 kidnapping and murder of Mohammed Abu Khdeir, a 16-year-old Palestinian. Immediately afterwards, Tag Meir chartered buses from Tel Aviv and Jerusalem to visit those grieving. The large Israeli contingent wished to pay its respects to the Abu Khdeir family, and they were eventually welcomed in the mourners’ tent.

“This family became our friends and every year since then we visit them – usually around Hanukkah. We bring sufganiyot [jelly doughnuts] and they bring oranges from Jericho,” Gvaryahu said, pointing out that this was a good illustration of how, even in the face of terrible tragedy, a victim’s family can be shown how the perpetrators are not representative of a whole people.

Gvaryahu stressed that Tag Meir gives no preferential treatment to Jewish or Muslim victims of terrorism or hate crimes. In instances of Muslim terrorism, Tag Meir delegations, comprised of Jews and Muslims, are also sent out to those grieving.

Tag Meir is a coalition of 48 organizations that works to build tolerance and fight racism in Israel. It is made up of groups from various religious backgrounds – Arab, secular, Reform, Masorti (Conservative), Orthodox – which Gvaryahu views as a key reason for its success. With volunteers located at several places in Israel, Tag Meir is able to dispatch help quickly, supporting victims with emotional, financial and legal assistance.

At its core, Tag Meir sees the battle against racism as a part of a campaign that supports both the democratic and traditional Jewish values of loving one’s neighbours and justice for all. Whatever their politics, the organization argues, the majority of Israelis oppose acts of violence against innocent people who “are being used as pawns in a political fight that has little or nothing to do with them.”

During the violence that erupted in Israel in May 2021, Tag Meir members worked to ease tensions between Jewish and Arab communities. They set up a human chain around the walls of Jerusalem’s Old City, visited areas that had been affected by riots, and handed out flowers in cities with large Arab populations in a gesture of peace.

Each year, Tag Meir orchestrates Flowers for Peace on Jerusalem Day, a time when activists hand out roses to residents of the Old City.

The umbrella group goes beyond responding to Jewish-Muslim attacks. In 2012, following riots against African refugees in South Tel Aviv, the home of some Eritrean refugees in Jerusalem was firebombed. Tag Meir organized a rally in the area and provided the family with material support.

Tag Meir also offers training in Israel, with programs for teachers in the national Orthodox school system and workshops in educational institutions across the country. Among the workshop topics are caring and empathy, open-mindedness and mutual understanding.

Responding to an audience question about the current political situation in Israel, Gvaryahu said, “I have no doubt in my mind that the next coalition will have Arab members and that the party of Mansour Abbas (the United Arab List) will be bigger and stronger,” citing the chance that more Arabs will vote in the next election. “This trend of governments working with Arab parties is good news and hopefully it will continue.”

Gvaryahu’s cross-country speaking tour included stops in Montreal, Ottawa and Toronto. His Vancouver talk on June 20 was moderated by Maytal Kowalski, a local board member of NIF Canada, and opening remarks were given by Ben Murane, executive director of NIFC.

For more information about Tag Meir and the New Israel Fund of Canada, visit tag-meir.org.il/en and nifcan.org.