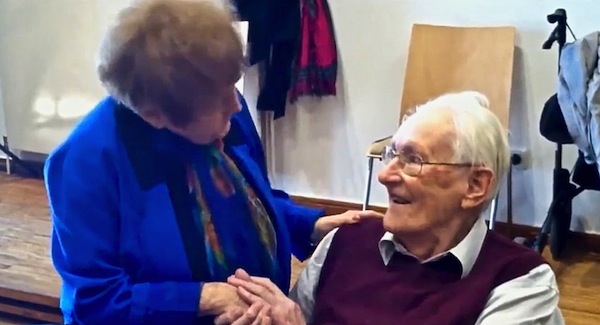 The Accountant of Auschwitz is more than the latest documentary to successfully convey the horrors of antisemitic genocide to an audience 75 years removed from those events. It exemplifies the emergence of a coterie of young filmmakers eager to tell the stories of the Holocaust to their peers and to future generations.

For Toronto director Matthew Shoychet and producer Ricki Gurwitz, the trial of nonagenarian SS officer Oskar Gröning in his Lower Saxony hometown in 2015 provided the entry point to explore an ambitious array of historical, legal and moral concerns. The approach they chose for their debut feature documentary, however, was as important as the facts and the message.

“The way we put it together with the editors, we knew we didn’t want to play it chronologically,” the 32-year-old Shoychet explained. “The film opens with fast-paced, happy music with animation, then right into the trial, then back. You’re challenging the audience, but in a fresh, exciting way. You don’t see many Holocaust films that are told that way.”

Shoychet’s path to The Accountant of Auschwitz was unusual in that his family was not directly affected by the Holocaust. He was interested in films about the Holocaust, but he wasn’t instilled with the kind of painful personal history that was (and still is) the catalyst for many filmmakers.

In 2013, Shoychet went on the March of the Living to Poland and Israel, where he received his first close-up exposure to the Final Solution and Holocaust education. A friend he made on that trip went to work for the Neuberger Holocaust Education Centre in Toronto, and that contact led to Shoychet directing the short film Anne Frank: 70 Years Later (2015), which screened at Auschwitz-Birkenau and the University of Warsaw.

Shoychet joined that year’s March of the Living as a chaperone, where he met Bill Glied, a Serbian native who’d been deported from Hungary to Auschwitz in 1944. When Glied remarked that he was going to Germany to testify at Gröning’s trial, Shoychet and Gurwitz put a pitch together to the Government of Ontario, the Rogers Documentary Fund, CBC’s Documentary Channel and a couple of private investors.

“It came together fast,” said Shoychet, who arrived on the scene in Lüneburg, Germany, in the midst of the trial.

Gröning’s job, as The Accountant of Auschwitz makes clear, wasn’t loading Zyklon B into the gas chambers or machine-gunning Jews. Thanks to a change in German law, it is no longer necessary to prove that a Nazi pulled the trigger. His presence at the scene and involvement in crimes is sufficient to decide guilt.

“Oskar was on the ramp [when the trains arrived and where selections occurred], taking suitcases and calming chaos,” Shoychet said. “But it was all part of the mass murder operation.”

Among the issues that The Accountant of Auschwitz takes on is the purpose and value of trying a 94-year-old man for war crimes. The film makes a convincing argument on multiple grounds, beginning with the extent of the cover-up that took place in Germany after the war.

That paltry number minimizes the scale of the crimes and serves to bury the past. The film asserts that Gröning’s confirmation under oath of his work at Auschwitz was a public and irrefutable rebuttal to Holocaust deniers and other antisemites.

“Even if you say he’s too old – and even the survivors say they don’t care if he goes to prison – for history’s purposes, the fact that a Nazi perpetrator is sitting in a German courtroom with German judges, saying, ‘Yes, these things happened, I was there,’ that makes the trial worthwhile,” Shoychet said.

A loquacious interview subject, even on the phone from Israel, where he had presented The Accountant of Auschwitz at the Jerusalem Jewish Film Festival a few months ago and was presently working on a project of the One Family Fund (he’s a board member), Shoychet confided that the process of making his feature doc debut was one of learning as he went. For example, until he went to Germany, he had never heard of John Demjanjuk, a Ukrainian who had been convicted of crimes at Sobibor yet consistently denied any involvement. Demjanjuk’s tangled tale, which, among other things, raises the subject of putting an elderly man on trial, ended up being a 20-minute segment in the film.

The Accountant of Auschwitz is rife with revelations and messages, but one gets the sense in talking with Shoychet that his main goal was conveying his own experiences of discovery, discussion, inspiration and outrage – with respect to Nazis and survivors, as well as contemporary justice-seekers and neo-Nazis – to viewers his own age.

“There may not be an ISIS fighter who will be deterred by a 94-year-old Nazi being prosecuted,” Shoychet allowed. “It’s making the connection of the past to the present. Trying to take a younger person and put them in the shoes of the survivors.”

Shoychet’s affinity for provoking questions and debate among the audience bodes well for his next efforts behind the camera.

“I never actually thought I would make a documentary,” he said with a trace of bemusement. “My passion is scripted narratives.”

For tickets to The Accountant of Auschwitz and the film festival schedule, visit seattlejewishfilmfestival.org. For another perspective on the impact of Gröning’s trial, see jewishindependent.ca/witnessing-her-history.