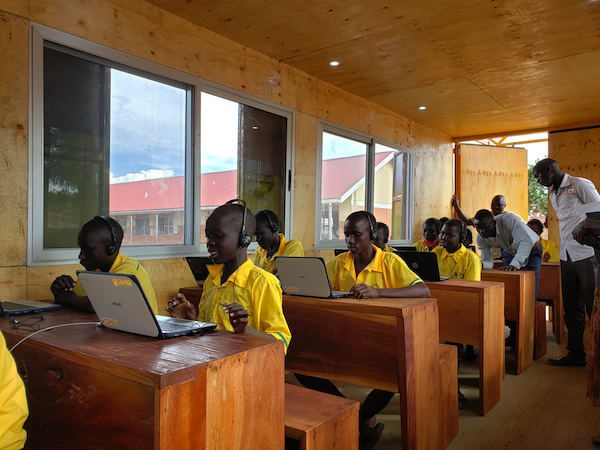 Students in Uganda at work in a BrightBox, a solar-powered classroom. (photo from Simbi Foundation)

This year’s graduating class at Vancouver Talmud Torah made a significant impact to the lives of thousands of refugees in the Bidibidi refugee settlement in Uganda. Their connection to the refugees on the African continent is a story that goes back to two young Jewish men who grew up in Vancouver and are determined to enhance education and create lifelong change in the lives of displaced people.

As co-founders of the Simbi Foundation, Ran Sommer and Aaron Friedland have established a template for BrightBoxes, which are sustainable solar-powered classrooms that are shipped to refugee settlements in Uganda and other countries. Each box costs $55,000 Cdn and includes a shipping container with solar panels, laptops, projectors and digital aids, as well as all the installation costs at its destination.

“We’re able to reach that many learners because we connect the solar energy from the BrightBox to other classrooms in the area. They all become connected by the electricity and wi-fi generated by the BrightBox, which means the entire school population is connected simultaneously. The power of this 40-foot shipping container is its ability to connect the surrounding school blocks,” Sommer explained.

Back at VTT, the school established the Grade 7 Mitzvah of Valuing Philanthropy program in 2008. Each year, the graduating class chooses charities or causes that are meaningful to the group and fundraises to support those causes. This year, the school decided to fundraise exclusively for the Simbi Foundation.

“After learning about the power of a BrightBox to dramatically transform lives in the Bidibidi refugee camp in Uganda, we decided to go bold and big by dedicating all money raised to this one cause only,” said Jennifer Shecter, director of communications and admissions at VTT. “We wanted to make a giant impact this one time.”

The Grade 7 class dedicates several months of study and exploration to the MVP program and Shecter said the students become emotionally invested and feel genuine pride in their fundraising efforts. “In years past, students ran bake sales, garage sales, babysitting services, movie screenings at VTT and other initiatives to boost their MVP contributions,” she said. “This year, all those options were not available due to COVID so several of our students passionately worked the phones (or texted) family members and friends to donate.”

Shecter said the students’ connection to Friedland and Sommer, and their understanding of the scope of this project, enabled them to convince others to jump on board and donate to the cause.

The two co-founders spent time in the classroom with the Grade 7 students, explaining the purpose of the BrightBoxes and the extent of the research that motivates the Simbi Foundation’s decisions. The students were assigned to groups to study solar energy, the BrightBox curriculum and other topics relevant to education in the refugee settlements.

“We had two elements happening in parallel: the students were learning about our program and fundraising for it,” said Sommer. “So, they knew exactly what their fundraising efforts were contributing to. Because of that, they were able to surpass their fundraising goal. We were extremely impressed and honoured with VTT and the students’ efforts.”

Shecter added that VTT has had a relationship with Friedland for the past five years.

“VTT students meet with Aaron every year to learn about new initiatives and participate in his programs, like the Simbi reading and literacy program, and they find Aaron and Ran to be enthusiastic, approachable and relatable,” she said. “Our students thoroughly enjoyed each interaction with them and felt a sense of pride knowing members of their community are creating avenues for real change for individuals with many barriers to education and prosperity.” 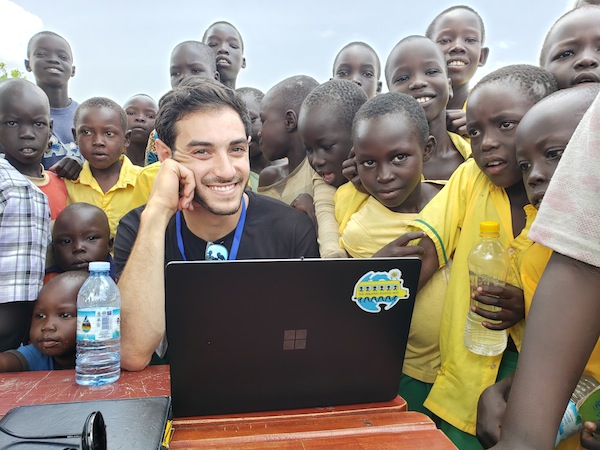 Ran Sommer was working as a project manager for a health region and moonlighting as a volunteer for a very small Vancouver-based international education charity. A trip to India to see the charity’s work in action changed the direction of his career – and the course of the organization.

The Walking School Bus was the brainchild of another young innovator from the Vancouver area, Aaron Friedland, who has received numerous recognitions, including a Next Einstein award, which was presented by CNN’s Anderson Cooper, and as one of the Jewish Independent’s 18 Under 36 honourees. TWSB, as it is shorthanded, emerged out of a trip to Uganda

Friedland took, where he learned that many students in that country do not attend school because it is too far for them to walk. The first step in his venture to resolve the problem was a book by the same name, which started a fundraising campaign that led to the purchase of the first vehicle, which shuttles Ugandan kids to school then does duty as a taxi in the off hours to cover expenses and generate revenue for school materials.

When Sommer returned from earning undergraduate and master’s degrees at Wilfred Laurier University in Waterloo, Ont., Friedland was one of the first people with whom he reconnected. Both alumni of King David High School, they had been in the same social circles and Sommer had followed Friedland’s successes via social media. He came on board as a volunteer, serving as director of communications.

While Sommer was getting some good training at project management in his day job at the health authority, when he joined a self-funded trip to see TWSB’s operations in India, he was inspired to take a leap into the uncertain territory of a startup nonprofit.

“I was just so blown away to actually see what I was communicating about for the last year,” Sommer said, adding with a laugh: “To see not only that it was real [but] it was 10 times better than I thought it was and I should probably be communicating it better.”

The inspiration was mixed with sadness that he didn’t feel his full-time job was as meaningful. He and Friedland sat down, figured out how to scrape together enough to give Sommer a salary that would just cover his rent and expenses and Sommer became first-ever employee of TWSB, as director of operations. (Friedland was still unsalaried at the time.)

Despite rapid growth since Sommer’s hiring, it’s still a streamlined organization, with seven employees in Vancouver and eight overseas. But, with its tight budgets and small team, the organization has branched out in a range of directions.

The organization was never simply about getting kids from Point A to Point B. First, there is a research component. Graduate students develop symbiotic relationships with TWSB, joining self-funded excursions to the operations – now in India as well – and looking at data from the projects to enhance their delivery and outcome.

Once TWSB put in place the infrastructure to get students to school, they realized some were arriving hungry and thirsty, which impedes learning. The organization added water-catchment systems, chicken coops and community-supported agriculture to their operations. They developed supplementary curriculum, dovetailing with the objectives of the school systems where they work, including an offline database that serves as a sort of virtual library. In a country like Uganda, where a vast majority of the population does not have access to electricity, let alone wi-fi, the curriculum is aided by Raspberry Pi microcomputers – about $100 each – which can communicate with one another in a localized intranet, but not access the internet. Teachers can use the tablets to project material on screens – a benefit in places like some refugee camps TWSB works, where the teacher to student ratio can be one to about 260.

Throughout the charity’s projects are economic development initiatives that both help the communities they serve and create sustainable funding for their work. They created the BrightBox Macro classroom – a shipping container retrofitted into a solar-powered classroom. While students learn in a space that takes up about seven-eighths of the space, a solar charging room powers not only the shipping container classroom but the entire adjacent school. It also provides a charging hub, where people from the community can pay a few cents to charge their cellphones, tablets, flashlights or other electronics, similar to for-profit charging hubs common throughout the developing world. These fees will add up, according to projections, to eventually pay for the entire facility over time.

TWSB also has a small but aggressive fundraising arm that obtains grants from foundations and groups including National Geographic. The academic expeditions are funded by participants themselves, who are asked to raise an additional $1,000 to $2,000.

Based on studies that indicate students can double their reading comprehension exponentially in just months through the multisensory experience of reading the words while hearing them spoken, TWSB developed Simbi.

This “reading-while-listening application” uses different voices, accents and dialects to give the reader the most relevant voice available in their respective region. Again, outcomes are studied and the data shared to make the impacts greater. Simbi began as a part of TWSB curriculum program and then expanded independently as a startup aimed at an even broader market, with Friedland as chief executive officer, while he continues as executive director of TWSB. In addition to the thousands of students served by TWSB, Simbi is in use by another 10,000 who are not part of the project and the objective is to make Simbi available to unlimited numbers.

Through partnerships with Uganda’s minister of education and the United Nations refugee agency, TWSB has expanded its reach into refugee camps and remote public schools.

“There are currently 32,500 students who are interfacing with our technology,” Sommer said. In Uganda, there are 300,000 refugee students alone – not including others in low-income, remote or otherwise underserved communities. And, with expansion into India and a scalable model that they envision taking off globally,

In addition to Sommer and Friedland both having attended Vancouver’s Jewish high school, there is another Jewish connection. The project began during Friedland’s studies in economics at McGill University, with the initial initiative launched within Uganda’s Abayudaya (Jewish) community.

While the Walking School Bus has grown, with 15 employees now around the world, its strength is still in the power of volunteerism, Sommer said.

“We’ve been able to maintain our values and the pillars of the organization because of an incredibly large army of volunteers that are so involved and motivated,” he said.