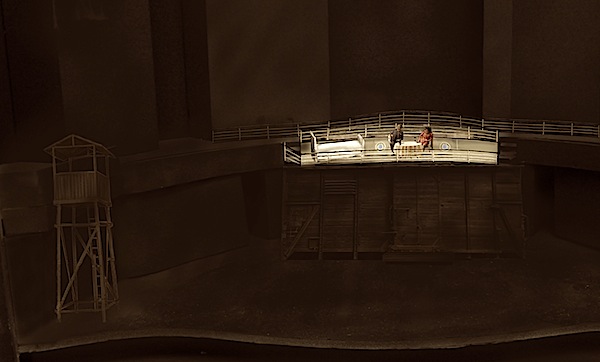 The ship’s cabin in Pasazerka (The Passenger), as envisioned by UBC Opera’s creative team. The opera is part of a series of events at the University of British Columbia marking the 75th anniversary of the liberation of Auschwitz. (photo from UBC Opera)

UBC Opera presents the Canadian première of Mieczyslaw Weinberg’s Pasazerka (The Passenger). Opening Jan. 30 at the Chan Centre for the Performing Arts on the University of British Columbia campus, this will be the first time the work has been presented on any university stage in the world.

The Passenger opens on a luxury liner bound for Brazil. A newly married German woman, Lisa, who, earlier in life, had been an aufseherin, camp guard, at Auschwitz, thinks she recognizes a fellow passenger. The passenger is Martha, a Polish Auschwitz prisoner who was thought to have died at the camp. The effect that their meeting (either actual or imaginary – it’s never made clear) has on the two women, and on Lisa’s marriage to the German ambassador to Brazil, is the subject of this dramatic and powerful opera.

UBC Opera’s production is being created from scratch. The opera has proven so popular no sets or costumes are available for rent; consequently, new sets are being constructed and, at this writing, the students were sewing together dozens of striped prison pajamas for the Auschwitz prisoners’ chorus.

After receiving its world première in 2010 at the Bregenzer Festspiele in Austria, The Passenger has seen frequent performances in various German venues, a highly acclaimed production at the English National Opera in 2011 and, more recently, it has been performed successfully in the United States at the Houston Grand Opera and at the Lyric Opera of Chicago. In spring of last year, it was performed at the new Tel Aviv Performing Arts Centre, and it will be performed in Spain later this year.

The UBC production has received funding from various sources, including the Adam Mickiewicz Institute, which promotes Polish culture around the world, and the Consulate General of the Republic of Poland, as well as Poland’s Department of Public and Cultural Diplomacy and Ministry of Foreign Affairs.

When the president of UBC, Dr. Santa Ono, heard about the project, he committed further funding for the production. Other funding has come from UBC’s dean of arts, Gage Averill, and the David Spencer Endowment Encouragement Fund. The production also has received support from the Vancouver Holocaust Education Centre, Temple Sholom and UBC Hillel House.

“In our time, antisemitism and neo-Nazism has become shockingly prevalent again. Even our own neighbour to the south has witnessed a growing social and political climate which has encouraged disrespect for other human beings and blatant racism,” said Prof. Nancy Hermiston, head of the Voice and Opera divisions at UBC and the director of this production of The Passenger, in a recent interview with the Independent. “In my opinion,” she said, “this has, in part, been released as a result of the behaviour and actions of President Trump. His attitude has given those elements of the world’s population promoting discrimination, hatred, antisemitism and neo-Nazism, a sense that they have a licence to do so. Our opera highlights the consequences of this hatred and racism. Now is the time to remind ourselves of respect and tolerance for others and of our humanity. It is the exact time to remind ourselves of the horror of the systematic extermination of millions of innocent people. Genocides continue to plague our world. Have we learned nothing from the past?

“We can never forget the tragic deaths of those millions of innocent souls nor can we forget those who survived that crime against humanity,” she said. “We cannot let another Holocaust occur.”

The Passenger is sung in Polish, Russian, Czech, French, Yiddish, German and English, which offers a particular challenge to the young singers at UBC. Equally challenging for the singers, according to Hermiston, is the difficulty of dealing emotionally with the subject matter, which, in rehearsal, has led to periods of weeping and feelings of deep sorrow, both for the singers and “even for me,” admitted Hermiston, “especially at the end, when the chorus of prisoners comes downstage and challenges the audience to ‘never forget, never forget.’” (Hermiston has engaged a counseling team to help the singers through their own trauma as they reenact this emotional narrative.)

Performances of The Passenger are set for Jan. 30 and 31 and Feb. 1 at 7:30 pm, and Feb. 2 at 2 p.m. Tickets are available online at music.ubc.ca/opera-pasazerka-the-passenger.

The opera is part of a larger commemoration of the 75th anniversary of the liberation of Auschwitz that is being undertaken by UBC Opera; the UBC Modern European Studies program; the UBC department of Central, Eastern and Northern European studies; the UBC Witnessing Auschwitz International Seminar; and UBC Go Global. During a symposium that runs Jan. 27-30, there will be various symposia and exhibits, and school-outreach programs featuring local survivors and UBC professors and students, as well as the opera The Passenger.