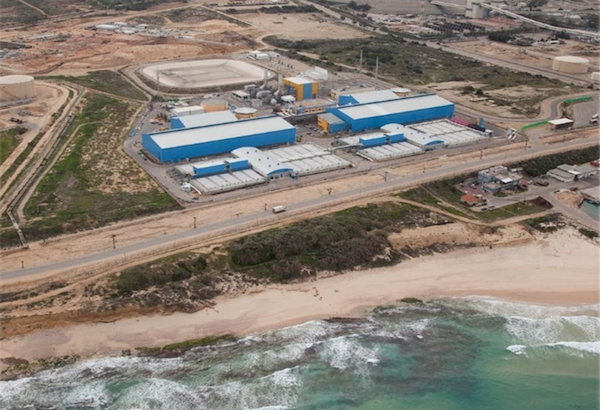 The seawater desalination plant in Ashkelon, Israel. (photo from © VID)

The Consulate General of Israel in Toronto and Western Canada marked World Water Day on March 22 with a webinar entitled “Squeezing Water from a Stone.” Dr. Alex Furman of Technion – Israel Institute of Technology in Haifa and Dr. Roy Brouwer of the University of Waterloo focused on Israeli and Canadian perspectives of water conservation and management.

Furman, director of the Stephen and Nancy Grand Water Research Institute at Technion, provided an overview of water management in Israel, describing how a land that is 60% desert – and uses more than 100% of its water – still has water left for use.

“The issue of water scarcity in the future is going to grow as the population grows and we need more water to feed people and for agriculture,” Furman said.

Israel’s population, which has expanded tenfold in the past 75 years, continues to climb. Further, its Western standard of living, including such things as daily showers, presents a further strain on the country’s water supply.

Israel recognized the need for innovation in this area several decades ago. Starting in the 1980s, it began treating wastewater for reuse in agriculture and, in the 2000s, the country started major desalination projects. Desalinated water now constitutes a large amount of the water consumed in Israel, but is not a completely win-win scenario. For example, a detrimental consequence of desalination is that the process also removes essential minerals, such as magnesium.

Another area where Israel is taking the lead is in water-saving technology, such as drip irrigation. Agricultural use of water in Israel has decreased in the past 30 years, a period over which agricultural production increased.

“Instead of irrigating the land, we irrigate the plant. Drip irrigation is providing water for what the plant needs. It’s not the amount of water that is important but the precision in how water is applied,” Furman said.

Concurrently, Furman added, Israelis are doing more to reduce water usage in the home, and the country has developed educational campaigns to inform its citizenry on ways to minimize water consumption.

“We are a very fast-growing country that requires a lot of water and requires the development of new water resources at all times,” Furman said.

Brouwer, an economics professor with an academic interest in water resources, highlighted the broader need for collective international partnership in looking at solutions for water issues through interdisciplinary cooperation, policy expertise and innovation.

“Water disregards boundaries and so must we,” he said, employing the motto of his department at the University of Waterloo.

The working definitions of water security, as put forward by the United Nations, Brouwer explained, are to have stable, peaceful and reliable access to adequate quantities and acceptable quality water. This, in turn, should sustain livelihoods, human well-being, socioeconomic development, protection from pollution and other water disasters, and preservation of ecosystems.

“From an economic point of view,” he said, “we need water to produce all kinds of things.”

As examples, Brouwer showed how much water is needed for basic clothing items: 10,000 litres of water are used to produce a kilogram of cotton, which, therefore, means 2,500 litres are required to make a 250-gram T-shirt and 8,000 litres for an 800-gram pair of blue jeans. For a morning cup of coffee, the equivalent of 1,000 cups of water are needed – from growing the bean, processing it and transporting it to the consumer.

Pressures on the international water supply are further exacerbated as countries such as China, Brazil and India achieve a higher standard of living and demand more goods like Western clothing and coffee.

“We expect that water stress will continue into the future,” Brouwer said, noting that two billion people in the world currently live in areas where water is scarce, including in the Middle East and in Northern Africa.

Global demand for water is, according to Brouwer, expected to grow one percent per year until 2050. By that time, 45% of global output would come from countries experiencing water scarcity. Tel Aviv, along with Sao Paulo, Cape Town and Karachi, is among the cities in the world most at risk of experiencing water shortages.

In a chart, Brouwer showed the skewed distribution of water usage around the world – from the average American, who uses 156 gallons per day to a French person who uses 76, an Indian at 38 and a Malian at three. Canada is the second-largest consumer of water per capita in the world. The average Israeli consumes 40% less water than their Canadian counterpart.

In his final remarks, Brouwer said the widely held view of water abundance in Canada may be a misperception when water quality and access to clean and safe drinking water are taken into consideration.

He concluded that water has value, but that its price is not reflective of its true value. Attention, he said, should be paid to both increasing water supply and policies that reduce water demand, and that water pricing is one way to raise awareness for essential water services.

Technion Canada partnered with the consulate on the World Water Day initiative.