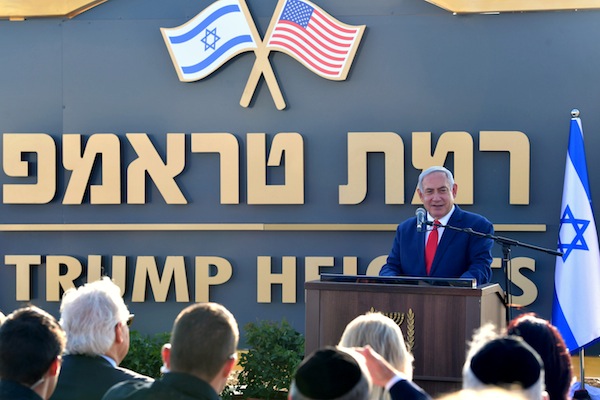 A special cabinet meeting was convened in the Golan Heights on June 16 to name a new settlement there in honour of U.S. President Donald Trump. Israeli Prime Minister Binyamin Netanyahu, together with U.S. Ambassador David Friedman, attended the special meeting, unveiling a sign reading Ramat Trump (Trump Heights) in Hebrew and English. The decision to name the settlement after the U.S. president was as a sign of appreciation for the Trump administration’s support of Israel. While Ramat Trump does not presently exist, the planned location is next to an isolated outpost with no more than 10 residents. It appears on paper that the plan is to build some 110 new homes. The Golan Heights is of strategic importance to Israel – before 1967, when Syria had control of the area, the Kinneret (Sea of Galilee), which is located below the heights, was constantly being fired upon from Syrian positions, making life unbearable for the residents of that part of the Galilee.