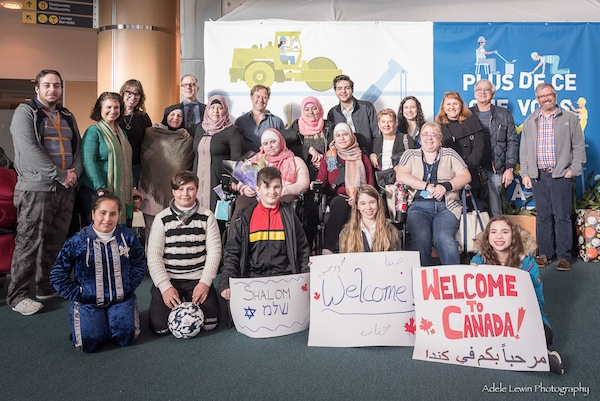 More than three years ago, Hanan Alsedawe’s family story of survival began as a waiting game on both sides of the ocean. But, on Jan. 21, 2019, the wait became a welcome as Hanan and her children stepped foot on Canadian soil.

In early 2015, congregations Beth Israel and Beth Tikvah began the long process of sponsoring and reuniting a Syrian refugee family with family who already lived in Vancouver. We worked with the government-approved sponsorship agreement holder – the Anglican Diocese – to prepare and submit our private sponsorship application to the Canadian government. It was a journey requiring perseverance by our coordinating committee, and patience and understanding from the many donors of both synagogues who demonstrated belief in our efforts regardless of the length of time it was taking.

On the Jordanian-Saudi Arabian border, in the Azraq Refugee Camp, Hanan and her two children – Mahros and Safa – shared limited resources with more than 55,000 refugees. Their extended family had made their way to Canada under government sponsorship, but Hanan had stayed behind, in Duma, Syria, because her husband, Raslan Abdulmalik, had been taken away by Syrian government forces and she had no idea of what had happened to him. She waited, she hoped, she prayed, but, eventually, with no sign of Raslan being alive, yet with no confirmation that he was either in prison or dead, Hanan decided to escape from Duma. She made her way with her two young children to Amman, Jordan, and eventually was placed in the Azraq refugee camp. There, she waited for a miracle.

Sept. 2, 2015, was a watershed moment that captured the hearts of people around the world and galvanized Canada into accepting 25,000 Syrian refugees into the country. Hanan’s mother and five siblings came to our shores under those auspices. But it would take years of work and hope to bring the last of Fayzeh Alsedawe’s daughters, with her children, to join the family here.

More than three years after initiating the sponsorship, Beth Israel and Beth Tikvah fulfilled Hanan’s dreams of joining her mother and siblings in Vancouver. On Jan. 21, representatives of both synagogues were on hand at Vancouver International Airport to welcome their sponsored family.

On any given day, at any given time, the international arrivals hall at YVR is a kaleidoscope of colours. On that Monday in January, the full spectrum was visible, augmented by the cacophony of diverse languages and a blending of bodies. Clearly, Canada is at its most multicultural in an airport setting.

Also palpable was the range of emotions. There was the full gamut of human feelings on display among those awaiting families, friends and strangers to enter the hall. Contrasts abounded: joy competed with sadness, anticipation with angst, relief with uncertainty. Each person arriving searched for familiar faces, welcoming arms and handwritten signs, indicating that someone was there for them.

In this swirl of humanity were representatives of Beth Israel and Beth Tikvah, their dream to sponsor a refugee family from Syria finally reaching fruition. Sharing this moment – indeed, at the centre of this moment – was the local family: the mother, Fayzeh, and her five adult children, Hanadi, Huda, Maha, Hatem and Mohammed, who had arrived in Canada three years ago and had waited anxiously to be reunited with the remainder of their family.

There was something so surreal, yet so tangible and in the moment at that airport reunion. Words are inadequate to describe the outpouring of relief and love when Hanan and her children emerged in the arrivals hall. An invisible bubble enclosed the family, as they looked at each other for the first time in more than four years. And then, quickly, the bubble grew, as our delegation surrounded the family with our own contributions of hugs, gifts and welcome. One gift in particular seemed to unite the new family with our Canadian sponsors – a Whitecaps soccer ball given to 13-year-old Mahros. Soccer, a universal language for children and adults alike!

Every family has a history, a story that captures the essence of their character and experiences. The Alsedawes’ story is one of courage and hope. Their life in Syria was destroyed by war but their determination to escape, under circumstances almost impossible for us to comprehend, means that, today, their story is one of hope and gratefulness. In Hanan’s own words to the committee, “I thank God and I thank you.”

Settlement requires patience. Never has the Hebrew word savlanut meant so much to our small committee. Patience was required in the very lengthy process from application to arrival. Patience is required as we work to settle the children in school, the mother in English-as-a-second-language classes and the family into a way of life totally foreign to them. Within weeks of their arrival, the family had visited a family physician, dental appointments were booked, the children were enrolled in public school, bank accounts were set up and, important in this day and age, cellphones and tablets were provided to them.

Our year of sponsorship has only just begun, but this journey has been undertaken with the generosity of many people. Our donors have compassion and commitment, and understand that, “There but for the grace of God go I.”