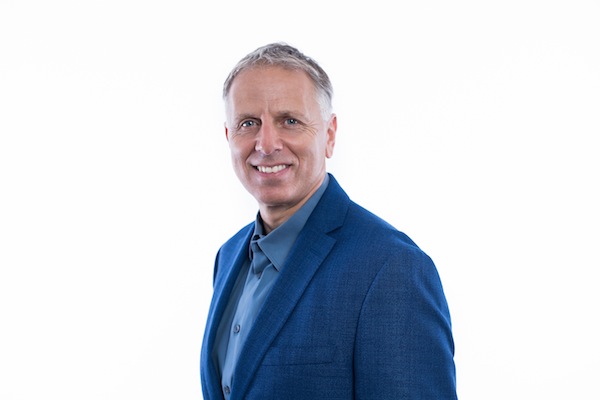 Uri Adoni shares “The Six Rules of Chutzpah” in his book The Unstoppable Startup. (photo from Uri Adoni)

Uri Adoni, author of The Unstoppable Startup – Mastering Israel’s Secret Rules of Chutzpah, is on a mission to teach businesspeople how to use chutzpah to their advantage.

Born and raised in Israel, Adoni was working at a large advertising agency when the internet was just starting to catch fire.

“I really remember the exact moment when I first saw the internet,” Adoni told the Independent. “It was back in 1995 and it really blew my mind. I said, ‘Wow! I can talk to somebody in Singapore!’ It was very slow, dial up. It took ages to download anything, but it was crazy for me. And then I realized I just had to be part of it.

“Funnily enough, one of the partners in the agency at the time, he said to me, ‘This internet thing, it’ll never catch on.’ But, I begged to differ! And the old advertising world, I think, it will change dramatically, because you have so much data and people will know exactly what you were doing. That’s when I joined Microsoft.”

Adoni was chief executive officer of MSN Israel, working for Microsoft, for about seven years. He then moved to managing venture capital, giving him a unique view as to why some venture owners succeed while others fail. After a decade on the job, he decided to share this knowledge in book form.

According to Adoni, “One of the questions we’ve been frequently asked by people from all over the world is, ‘What is the secret sauce behind the Israeli success?’… We’re the second-largest tech hub in the world, second only to Silicon Valley, the largest per capita. We have the highest density of startups per capita, the highest venture capital per capita.”

Adoni shared that Israel has the third most companies on the NASDAQ, after the United States and China, though, in terms of population and geography, Israel is tiny compared to these countries.

“The positive side of chutzpah is what makes the difference between Israeli entrepreneurs and other entrepreneurs from around the world,” said Adoni. “One of my hypotheses is that, unlike charisma, which you’re either born with or not, chutzpah is actually something you can teach. And, I’d say, more than that, by the way. I think that any entrepreneur in the world, whether Israeli or not, they all have chutzpah. They just don’t know how to define it this way. But, I really think it’s a key ingredient in any successful startup.

“I felt the best way to explain it is by demonstrating what it is, and that the best way to demonstrate it would be to interview very successful entrepreneurs who could relate to it – asking them how important chutzpah has been in the success of their startup. If they are Israelis, they’d know it, and be able to put their finger on it.” 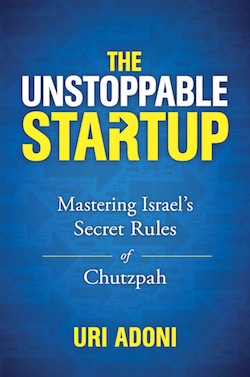 In The Unstoppable Startup, Adoni delves into what he has dubbed, “The Six Rules of Chutzpah,” with plenty of examples. The first rule involves changing one’s mindset, which, in turn, enables you to challenge reality as you know it, by thinking ahead of the curve.

“One of the companies we invested in at the time was a company, called CyActive, in the computer anti-virus world,” he said. “Usually, the way it works is that you have a virus and then you have the anti-virus that comes up with some sort of virus blocking. But it’s a cat-and-mouse thing, because they have to come up with a new virus and the anti-virus has to block it.

“They came up with a really interesting approach by changing the paradigm,” he explained. “They took the existing virus and, with a very smart algorithm, they created tens of thousands of potential viruses that could be expanded or developed from the original virus. And then, once we had all these viruses, we could create a tool to block them, before they even existed. So, they actually built something that blocks viruses that no one had come up with yet, but that there’s a chance they’ll come up with.”

Another rule, Adoni said, is innovating in order to meet future demand. In this context, he gave the example of the navigation app, Waze. Users share real-time data about their travel location and speed, allowing Waze to calculate the quickest way from point A to B.

“Once they use the application, all of this data [is] collected and you can sometimes know and predict where there will be traffic jams, guiding people to different routes and getting them to the destination faster,” said Adoni. “A lot of people were very skeptical about it. They said nobody will share their data; privacy issues. But, they proved everybody wrong. The market actually needed that, but we needed to bring them the tool. Once the tool was introduced, it was adopted very quickly.

“By the way, [Apple’s] Steve Jobs was one of the best – all the way from the Macintosh to the iPhone, having this entrepreneurial mindset that says, ‘I know what people need and will introduce it to them.’”

While Adoni’s book is naturally geared to startups and tech companies, he is adamant that the principles are relevant for any company, “no matter if they are small, big, or what state they are in because, at the end of the day, if you’re just doing more of the same, you may sell, you may make a living, but not necessarily make it big, or breakthrough, or grow in a large way.

“Even if you just have a small coffee shop, you should have your own competitive advantage, whether that’s with your cakes, experience, prices, name, or community. You need to differentiate yourself, showing why people should choose you over others. Random choice will not build return business. Any company around the world, any business you can think of, must think in a mindset of how they can outpace their competition, figure out their competitive advantage.”

Adoni believes his book is also great for investors, as it will teach them what to look for in startups.

Not wanting to reveal much, Adoni said he is currently working on a venture to challenge the mindset of Americans about developing new high-tech hubs in places that many people would not even consider a possibility.