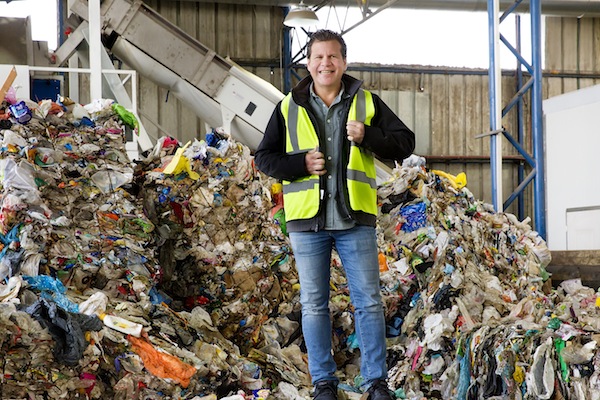 UBQ chief executive officer Tato Bigio in the factory at Kibbutz Tse’elim, in the Negev. (photo from UBQ)

Garbage is piling up everywhere – in landfills and elsewhere on the ground, in oceans and other bodies of water, and even in outer space. And there is growing awareness that our attempts at reducing garbage through recycling has not worked as first imagined – only a small percentage of what we put in our recycling bins ends up being recycled. However, a new Israeli company offers some hope for improvement.

Based in Kibbutz Tse’elim in the Negev, UBQ is producing plastic pellets out of household garbage. The name UBQ is not an acronym, but an abbreviation of the word ubiquitous, conveying that the problem of garbage is everywhere and ever-present. The company launched in 2018, after six years of research. Its chief executive officer, Jack “Tato” Bigio, recently spoke with the Jewish Independent via Zoom from his office in Tel Aviv.

Originally from Peru, Bigio came to Israel in 1984, when he was 18, to attend the Hebrew University of Jerusalem. In the following years, he went from corporation to corporation, developing his business and management skills, until, in 2012, he joined UBQ.

A concept was proposed: to take household waste, such as paper, cardboard, plastics, diapers, food scraps, etc., and turn it into a thermoplastic composite material. This, Bigio explained, “means turning all this waste into a new plastic that can replace conventional plastic materials made out of oil, to make end products.”

Thermoplasticity is a characteristic of a material that is affected by heat – that is liquid when hot and solid when cool, such as sugar or wax.

“UBQ is a plastic that has mechanical properties … very similar to common plastics made out of oil,” said Bigio.

The UBQ process is able to take any garbage stream and, instead of it going to landfill, converting it – upcycling it – into UBQ plastic, regardless of the exact mix of garbage collected.

“The waste balance will be different in different places, depending on the way they handle the source [garbage],” said Bigio. “If the proportions are a little different, the reaction process of UBQ knows how to handle these differences.

“One of the incredible things we’ve developed is kind of a reactor. Once we know what is in the source of our waste, we can manage a process where different percentages are balanced out in the end material.”

While the exact process, which produces no waste itself, remains a protected secret, Bigio said, “There is enough water in the waste, so we don’t need water. And we will convert the waste, 100% of it, into UBQ material. We don’t use any additives or any chemicals, no accelerates or enzymes. It’s just a very incredible system that involves physical and chemical reactions with temperature … sheer forces, conditions like oxygen, certain gases…. It’s a very green and low-temperature conversion, which makes it really hard to believe.”

All of UBQ’s factory and office trash is recycled in the making of the plastic.

The location of the initial UBQ factory was selected for a number of reasons.

“We chose that kibbutz, which is in the south of Israel, because we wanted to develop this amazing technology in a perfect place to be able to enjoy the practices of being revolutionary – not only in the material and science, but also in the engagement of different communities,” said Bigio. “Today, we have Bedouins, Russians and Israelis working together at UBQ.”

“Waste is an unlimited source of material,” said Bigio. “So, if you buy a product made with UBQ, you will not only be enjoying the product you buy – if it’s a box, or chair, or table – but, by buying it, you will be making good with the environment. You’ll be saving waste, you’ll be saving carbon emissions, and it doesn’t cost a penny more than regular plastics…. We’ve come out with a technology that makes our material competitive to regular plastics.

“One of the reasons for it is that we use waste, and waste is a negative cost – they pay us to take waste. The other benefit of UBQ is that it works in temperatures that are very low compared to regular plastics. We work at 200°C; regular plastic made out of oil is between 800 to 1200°C. Also, we don’t use any water, because there is enough water in the waste.”

Though it might take a few years before Canadians have the option of buying things made with UBQ plastic created from our own garbage, products made out of UBQ plastic produced in the Israeli plant are already finding their way into local stores. UBQ products can be recycled just like other plastics.

UBQ opened a second and much bigger plant in the Netherlands, and the list of countries interested in having plants includes Japan, Australia, Singapore, Thailand, Argentina and Chile.

“It will take some time until we reach all these markets, but we expect to be, in the next 10 years, phenomenally dominating the plastic market,” said Bigio.

Right now, landfill waste is something Bigio said “pollutes oceans, rivers, natural environments, and is killing animal life … at the end of the day, it creates a lot of harm to human beings. If you really care about the future or [coming] generations, you better start working on helping make a difference.”

Bigio encouraged others to think innovatively to find new ways of reusing existing materials. “It’s just a matter of wanting to do it,” he said. “Governments, multinational companies … individuals can choose to do the right thing.”