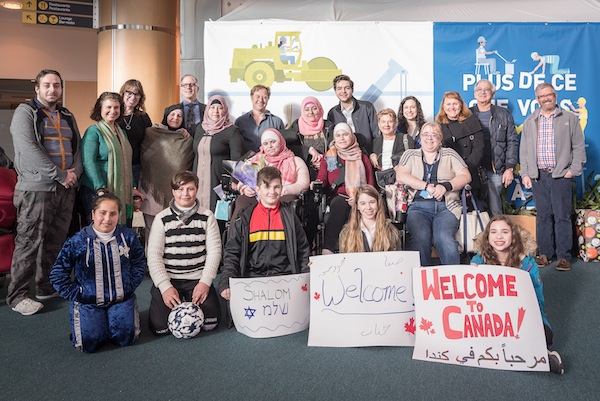 Canadian Jews have a long history of standing up for the rights and welfare of refugees. And while Jewish immigrants have often been at the receiving end of this generosity, Vancouver Jewish congregations have played a frequent and often crucial role in ensuring the safe relocation of many non-Jewish refugees as well. They have sponsored refugees from Tibet, families from Vietnam, as well as helped relocate Jews from North Africa and Hungary during times of political unrest. When Canada announced its intention to accept some 25,000 immigrants from in and around wartorn Syria in 2015, many Vancouver congregations once again stepped up to help.

The news of a little Syrian boy whose body had washed up onto a Turkish resort beach in 2015 became a haunting symbol of the war for many Canadians, Rosalind Karby and Miranda Burgess told the Independent. In November of that year, the two women, along with a small cadre of volunteers from congregations Beth Israel and Beth Tikvah, launched an appeal to sponsor a Kurdish family’s immigration to Canada. Karby, who is no stranger to philanthropic initiatives, said the decision to mobilize a sponsorship was a “no brainer” for her, and for many in the local Jewish community. “There’s no question. That [image] sort of galvanized us.”

By 2016, the effort to save Syrian civilians in peril had become an egalitarian issue: Orthodox, Conservative Reform and Renewal congregations here were finding their own ways to fundraise and reach out. In the Lower Mainland, Schara Tzedeck members voted to contribute funds to the Joint Distribution Committee’s humanitarian aid efforts, while Or Shalom, Temple Sholom, Beth Israel and Beth Tikvah applied to the federal government for permission to sponsor families to Canada.

Burgess said, for many, the decision to help fleeing Syrian families emanated from longstanding Jewish experience. “From wandering Aramaeans and other dispossessed Jews to post-Holocaust migrations, to a situation like this, it felt like a very direct line, I think, to a lot of people,” she said.

But, if the ethical decision to provide a lifeline for refugees was a “no brainer,” as Karby put it, the path to bringing that sponsorship to fruition was anything but simple. It was not merely a matter of overseeing their resettlement in Vancouver. There would be a long list of forms to fill out. There were meetings with immigration representatives and members of the Anglican Church archdiocese, which coordinated the sponsorship process for this program. And there were lengthy virtual meetings with the applicant family, who, for the time being, was living in a crowded refugee camp in eastern Jordan.

There was also an “exhaustive” number of details to collect, often over spotty wireless connections, to verify the family’s eligibility: education backgrounds, family histories, residences and connections for all adults. In all, about 40 pages of forms to fill out, said Burgess.

For the family, the application process had its own challenges. For Hanan Alsidawi, the mother, it meant repeated trips to the capital, Amman, an hour-and-a-half drive away from the refugee camp, to secure paperwork, signatures and permission. Her husband, who had been reported missing when the family fled Syria, had not been found. Making it to Canada safely now rested on Hanan’s own initiative and the kindness of strangers thousands of kilometres away in Vancouver.

Sponsoring a refugee family came with considerable financial responsibility. According to the Canadian government, the sponsors were in charge of covering all out-of-pocket costs for the family for one year, including food, lodging and incidentals. That meant the sponsors would need to have a minimum of $40,000 in the bank to qualify. Moreover, Burgess and Karby estimated, that was actually low: for a family of three, the cost of living would be closer to $50,000 a year. The team would need to raise at least $10,000 more than mandated by the government.

“At the time, BI had just completed five years of fundraising for the [synagogue’s] new building,” Karby said. It was also just wrapping up its annual High Holy Day Appeal, another important humanitarian project that relied on the congregation’s support. Asking the entire congregation to take on a third project – and quickly – seemed unrealistic.

After some thought, the sponsorship team decided to take a different tack: they would reach out to a smaller, select group of family and friends who might be able to cover the sponsorship. And they would put a top limit on each donation.

“We determined a maximum gift of $1,000 so that no one person would feel that they should just pay the whole thing and no one person could feel they had to meet up to some high standard,” Karby explained.

But that still meant coming up with at least 40 to 50 donations.

“So, we cast a wide net,” Burgess said. “We worked our networks.”

They appealed to donors both inside the congregations and out. They contacted people they knew had contributed to humanitarian initiatives before. And they appealed to friends far away.

“I went to graduate school in the United States and I have a big network south of the border,” Burgess admitted, noting that the idea struck a chord with American residents as well, “who, because of their own governmental circumstances weren’t able to do sponsorships but felt the same urgency.”

By the end of the appeal, they had received donations from as far away as Michigan, Massachusetts and Maryland. “All were very small, but contributed to the whole,” said Burgess.

They had met their goal – and then some. Karby said Beth Tikvah’s donation of $10,000, whose fundraising was coordinated by David Numerow, put the project over the top, bringing the total to just over $50,000.

Still, it took more than two years for the family to receive approval to immigrate. In January 2019, Hanan and her two children, Mahros and Safa, arrived at Vancouver International Airport to a fanfare of elated family and Jewish congregants. Some of the Alsidawi clan was already living in Vancouver, so Hanan and her children would be able to count on help with things like language interpretation and getting settled in their new city.

We were strangers, too

According to Congregation Beth Israel president Helen Pinsky, quite a number of BI congregants stepped up to support the initiative privately when it was announced. She said she chose to donate because the endeavour resonated with her values as a Jew.

“Many of us had been involved in sponsoring the Vietnamese refugees in the 1970s,” she said. “It had been a very happy, very successful experience for me.”

She said the experience taught her the value of such initiatives. The sponsorship, she said, “is certainly in keeping with our beliefs and how we should behave, according to our forefathers, and it seems like it is consistent with an organization of people who have strong feelings about pikuach nefesh, the saving of a soul.”

Rabbi Jonathan Infeld, who serves as Beth Israel’s head rabbi, said helping others is a core principle to the Jewish faith, specifically because of the historical experiences of the Jewish people.

“Torah tells us that we were foreigners in a foreign land and we need to care about foreigners, and people suffering,” Infeld said. That’s why the congregation – and other synagogues as well – felt it was essential to help Syrian families in distress. “We wanted to take up what the Torah told us in a very real, concrete way.”

Even though sponsors’ financial responsibilities ended in January, their bond with the Alsidawi family has not. Burgess and Karby continue to visit Hanan and her children and check up on their progress. By law, the sponsors are not permitted to offer further funding, and Karby admits that the transition will continue to take time for the small family.

For the volunteers, the past four years of effort was more than a gesture of generosity. It was crucial they help.

“You save one life, you save a world, and we were fated to do what, well, any human being should do, really,” said Karby. “But I think that our Jewish tradition of helping the needy, of trying to save a life definitely propelled Miranda and me.”

Note: This article has been amended to correct Rosalind Karby’s first name, which was misspelled in the original version.