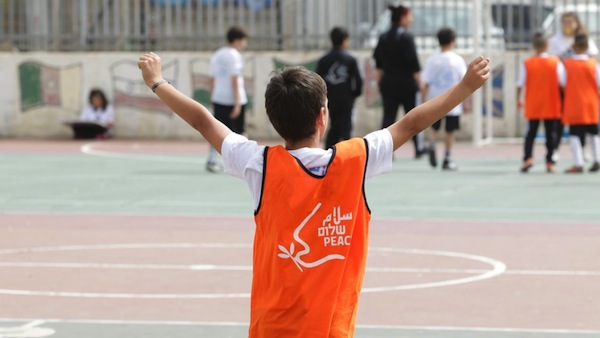 A participant in Playing Fair, Leading Peace in Jaffa. (photo from Peres Center)

“I did not know I could play with Jews or talk to them. Now I want to and I can,” wrote an Arab middle school student whose school was one of 10 – five Jewish, five Arab – to participate in Playing Fair, Leading Peace, created by the Jaffa-based Peres Center for Peace and Innovation to unite Jewish and Arab Israeli children through soccer.

In 2018-2019, Playing Fair, Leading Peace engaged 300 fifth- to seventh-graders in Arab and Jewish sectors of Jerusalem, Tel Aviv, Jaffa, Kalansua, Kfar Saba, Beersheva and Tel Sheva. In each participating school, one class is matched with one class from the corresponding nearby school. Kids and their teachers are guided by two specially trained university students (one Jewish, one Arab) in five tolerance education and prep sessions held at their own school, and in five joint soccer matches on one another’s turf.

In these games, Arabs don’t play against Jews; each team mixes children from the hosting and visiting schools. And there are no referees; the children are given the responsibility of determining rules and mediating disputes.

“They need to communicate to solve issues during the game by themselves. This is a smart component of the program,” said Tamar Hay-Sagiv, director of the education for peace and innovation department at the Peres Center.

But it’s not an easy component, because one side speaks Hebrew and the other speaks Arabic. “We tackle the language issue by teaching through sports. They learn the language of ‘the other’ while they play,” said Hay-Sagiv.

Nor is it a simple matter to convince parents to allow cross-visits.

“There are fears and stereotypes to overcome,” acknowledged Hay-Sagiv. “We had one child in the south whose family was afraid for him to travel to a Bedouin school. It was a trust-building process between his parents and the head of the school, who gave us full support and made the family comfortable in allowing the visit. It’s always a challenge for Jewish schools to agree to travel to Arab communities, but the hospitality they receive is unbelievable.”

One child wrote on the evaluation form after the first visit: “Even after they prepared us, I was still afraid of them, but when I met them, they looked like us, only with different clothing.”

As for stereotypes, it’s not only about the Arab-Jewish divide but also about gender. “We’ve had girls thinking they are not allowed to play soccer,” said Hay-Sagiv. “We have to overcome that, too. We try to create a safe space for everyone that is fun and interactive.”

For the last 18 years, the Peres Center has used sports, specifically soccer, as a tool to break down barriers between youth, Hay-Sagiv told Israel21c.

TPSS, started in 2002, is the first and longest-running initiative of its kind in the region. Hay-Sagiv said it “significantly influences Arab and Jewish, Israeli and Palestinian girls and boys to become agents of positive change in their community and around the world.”

The Peres Center sought a way to scale up this successful, but limited, peace-building-through-sports program in a more accessible and less expensive format that would also involve nonathletic children.

“Based on our experience, we thought it would be interesting to get into Jewish and Arab schools during school hours and engage full classrooms. This way, we can reach all the boys and girls, as well as their teachers,” said Hay-Sagiv. When the other children in the host school observe the mixed teams playing soccer together, “it’s unbelievable to see the reactions to this unusual sight. That also has an impact.”

Playing Fair, Leading Peace is supported by the Israel Football Association, which oversees Israel’s national football (soccer) team comprised of Jewish and Arab Israelis, and captained by Circassian-Israeli Muslim Bibras Natkho. The program also works with the National Union of Israeli Students (representing all Israeli universities) and the Laureus Sport for Good Foundation.

“Hopefully, next [school] year, we will double the number of participating schools,” said Hay-Sagiv.

She explained that fifth- to seventh-graders were chosen for the program “because we see this as a crucial age for exposing them to this type of experience. Verbally, they are well developed and they’re going into a tough age. You have enough time to work with them during school hours, and it’s still possible at this age to work with boys and girls together.”

Based on questionnaires distributed before and after the activity, Hay-Sagiv and her staff can see that the program effects changes in attitude.

“I want to feel with them exactly the way I feel with my friends,” wrote one child.

“I hope that we will become one family that does joint activities in togetherness and tolerance,” wrote another.

Hay-Sagiv isn’t surprised by this impact, having seen the inroads made over the years by Twinned Peace Sports Schools.

“We’re traveling to Poland to organize a sports tournament in Warsaw with Israelis, Poles, Germans, Hungarians and Russians to mark 80 years since World War II, hopefully in September,” she said. “We are thinking of bringing a mixed Jewish and Arab team from Israel.”