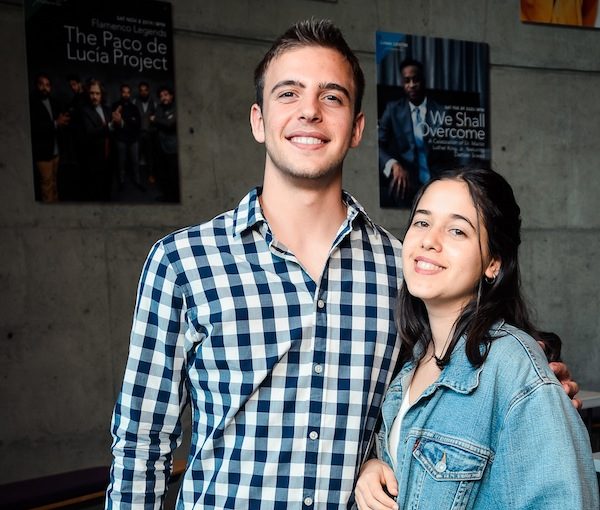 Israelis Ofir Gadi and Or Aharoni are rounding up their year of volunteering in Metro Vancouver. (photo from Jewish Federation of Greater Vancouver)

In Israel, high school graduates can go straight into the Israel Defence Forces (IDF) or opt to do a shnat sherut (year of service, for which the acronym is shinshin). The vast majority of 18-year-olds who do a shnat sherut do so inside Israel, volunteering with a variety of social welfare and other nonprofit organizations throughout the country. But, through the Jewish Agency, approximately 100 teens do their year of volunteering in Jewish communities around the world.

Vancouver began to take part in the program in 2015. In August of that year, Jewish Federation of Greater Vancouver brought three young women to split their time between Vancouver Talmud Torah, Richmond Jewish Day School, King David High School, Beth Israel, Temple Sholom, Beth Tikvah and the Jewish Community Centre of Greater Vancouver. The final quarter of the year was spent volunteering at camps Hatikvah and Miriam and the JCC day camp. Each agency contributed a portion of money to cover the expenses needed to bring the shinshiniot (female plural for shinshin) here from Israel and to contribute to a small monthly stipend. Host families, who welcomed an 18-year-old Israeli into their family for a period of three months, took care of living arrangements and meals.

Nearly four years later, all of the original host organizations continue to participate in the program. Shinshin coordinator Dan Stern helps make the connections between the organizations and the volunteers as smooth as possible. The main challenge continues to be finding host families. While it is a significant responsibility, the fact that many host families have hosted volunteers multiple times speaks to the rewards of doing so.

This year, for the first time, Vancouver picked one male and one female shinshin. Ofir Gadi and Or Aharoni arrived in early September and settled in right away. They spent two days each week at VTT, interacting with students through activities including song, dance, multimedia presentations focusing on Israel, Israeli-style Jewish holiday celebrations, and Hebrew. RJDS had them once a week for similar activities and the pair helped at the JCC with teen programming. On Sundays, they split up to give a special Israeli flavour to various synagogue religious schools. Federation also has had them working at many community events and its outreach program, Connect Me In, which services Squamish, Langley and Burquest. Additionally, the two have helped make other community-wide celebrations special, including making a presentation at this year’s Yom Ha’atzmaut celebration at the Chan Centre for the Performing Arts.

Gadi and Aharoni have proven to have complementary personalities. They have worked together, smiling through the challenges they have faced and thoroughly enjoying almost everything they’ve encountered here.

“Vancouver is my favourite city in the world,” said Aharoni with her typical warm smile. “The weather is much better than what the other Canadian shinshinim have and the people we have met here have been so welcoming and amazing. Also, being here, I’m not the only one saying thank you on the bus!”

Gadi has also had terrific experiences. “We have worked a lot in many areas of the Vancouver Jewish community and the good thing about that is we have met so many wonderful people,” he said.

While they were prepared to a certain degree about what to expect, both Aharoni and Gadi have said being in Vancouver has exceeded their expectations. “We both love it here and plan to return,” said Gadi.

The biggest surprise for Aharoni was that she felt at home as soon as she arrived. “I didn’t know that it would be such a good fit,” she said. “I was positive coming in but I have found the energy and the vibe of the students amazing and the community, host families and friends I’ve made have been so special.”

Although she has traveled outside of Israel, she said she didn’t know anything about what it is like to live as a Jewish person outside of Israel. She comes from a secular Israeli family and, she said, living here has brought up questions about Jewish identity that had never been an issue before.

“Firstly, I am an Israeli. Secondly, I feel fully Jewish even though I am not at all religious,” she said. “I see that it’s important to live the Jewish life the way you want. I also understand that going to synagogue is important here in order to be part of something, and being part of a community is very special.”

Both teens have stayed with families with whom they have deeply connected. “It’s been great to be part of a different family every few months,” said Gadi. “I have enjoyed my host siblings and I hope our connection will continue and my family in Israel will have a chance to host my families from here.”

Gadi is from a small community near Modi’in called Reut and Aharoni’s family lives on a moshav called Aviel, near Caesarea. Both shinshinim expect visitors, as host families and friends of past shinshiniot have kept in touch and visited when in Israel.

“The connections with people makes this experience more powerful and meaningful. Both Ofir and I have made so many special connections with students, families and the Vancouver Jewish community,” said Aharoni.

Up next for both shinshinim is summer camp. Aharoni will help augment the Israel programming at Camp Hatikvah and Gadi will be at Camp Miriam lending an additional Israeli vibe to the camp.

For more information about the shinshin program or how to host one of the two shinshinim who will arrive in September, contact Jewish Federation at 604-257-5100.