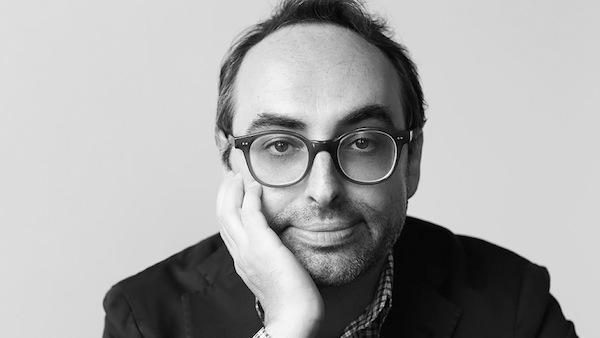 “You want to know the first rule of running a billion-dollar-plus hedge fund?” Lake Success protagonist Barry Cohen recalls telling the high school boys who invited him to speak to their Investors’ Club. “Don’t sweat the metrics. We’re not really about the numbers. Do you know what we are? We are a story. Hedge funds are a story about how we’re going to make money. They’re about being smart, gaining access, associating with someone great. You. You are someone smart enough to make others feel smart. You are bringing your investors something far more elusive than a metric. You’re bringing them the story of how great you’ll be together.”

Through the character of Barry Cohen, on his journey to what would be self-discovery if he were at all self-aware, author Gary Shteyngart explores the societal circumstances in the United States that led to the election of President Donald Trump – and could well do so again.

Shteyngart opens the Cherie Smith JCC Jewish Book Festival on the night of Feb. 8. In conversation with CBC’s Lisa Christiansen at Rothstein Theatre, he will no doubt talk about his latest novel, Lake Success, about a hedge-fund manager who flees his wife and young child, who has recently been diagnosed with severe autism, as well as a Securities and Exchange Commission investigation into his financial dealings.

Barry is stuck in a childlike state. He had a difficult father and his mother was killed in a car crash, a death Barry witnessed and which haunts him. Barry yearns for affection; he cannot regulate his emotions. He believes himself to be a self-made man and he is constantly coming across people he thinks would benefit from his mentorship, from fellow fund managers to a poor black youth he encounters on his travels to his first girlfriend, with whom he is trying to reconnect – hence, the bus trip. He is trying to find her, in the hopes of rekindling that relationship, and all the lost hope it encapsulated, while disregarding all the relationships – personal and business – he has left behind in New York City. 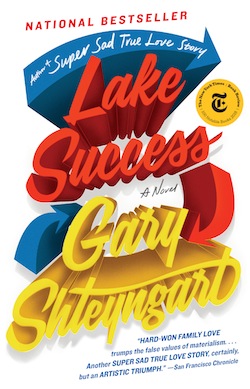 The main female characters in Lake Success – Barry’s wife, Seema, and his former girlfriend, Layla – are not as well-constructed as is Barry. Despite a sympathetic portrayal, it is hard to understand what anyone would see in Barry, yet he manages to attract smart and beautiful women. The novel provides some explanation as to why Seema would marry him, including family expectations. And, after meeting him for the first time, she recalls, “she went home and Googled Barry’s net worth and found it comforting. A man that rich couldn’t be stupid. Or, Seema thought now, was that the grand fallacy of 21st-century America?” So, she thought she was connecting with an intelligent and wealthy man, but how Barry continues to be an attractive prospect to women (and men) after he cowardly runs away from his responsibilities and is nearly penniless is a bit of a mystery.

For some readers, Shteyngart might come down a little too easy on the one-percent, as exemplified by Barry, Seema and the few people we meet in their realm. When the Jewish Independent asked the author why it was important to imbue the character of Barry with humanity, Shteyngart said, “Books about inhumane characters are not fun to write. Imagine an entire novel set from Trump’s point of view. Eat burger, get angry, eat burger, get angry. It’s just not 330 pages worth of material.”

That is not to say that Shteyngart is condoning the lifestyle of the ultra-rich; in fact, quite the opposite, though he does so with seeming resignation.

“Without giving too much away for the new reader,” he said, “Barry does change. Somewhat. Slightly. But the damage that has been done to the country socially and politically by Barry-like oligarchs is not going to go away, even if the next election ends the so-called Trump Era.”

While Lake Success doesn’t offer insight into how the divisions in Trump’s United States could be repaired, Shteyngart’s acerbic wit and astute observations offer an entertaining read that will hopefully elicit readers’ introspection about our own privilege and identities, how we define and carry ourselves in the world. Both Barry and Seema have a conflicted relationship with their cultural heritage; Barry his Jewish, Seema her Tamil.

As Barry holds his three-week-old son in his arms – long before the autism has been diagnosed – “he whispered through all his agnostic lapsed-Jew bullshit, ‘Please, God, just don’t do anything to him, okay? My sins are my own.’”

Later in the novel, on the bus as it enters Louisiana, Barry overhears a conversation between two white men, one an aspiring preacher who declares hatred of “any kind of ignorance,” then goes on to explain why “they nailed Jews to the cross” and that “Muhammad was killed, because he couldn’t accept Jesus Christ as permanent.” At that moment, “Barry realized that the man was now looking at him. And also that he was a Jew. He hadn’t really thought of being Jewish since he was in grade school. But he did now.”

Even later, Barry would again look at his heritage differently, considering how it could be passed on to his son. For the most part, though, Barry is perceived as a white male throughout the novel.

“Yes, it’s very strange,” said Shteyngart about being Jewish in America. “I was being interviewed by a Jewish intellectual who was trying to convince me that we weren’t white. Which is oddly enough the talking point of the neo-fascist right. In any case, the feeling that Jews were a part of the American mainstream – think Seinfeld – has been badly shaken both by the physical attacks against Jews and by the general feeling that the country is now being run as an exclusive enclave for straight white Christian males with the occasional sprinkling of Sheldon Adelson.”

Lake Success is a provocative read with some brilliant one-liners, such as the description of neighbours in their building, whom Barry hates, as being “so featureless, they could have come with the hallway,” and, when he faces difficulty becoming a writer, Barry concludes, “He was a damaged person, but not damaged enough to make a life out of it.”

The Jewish Book Festival runs to Feb. 13 at the Jewish Community Centre of Greater Vancouver and other venues. For the full lineup, visit jewishbookfestival.ca.