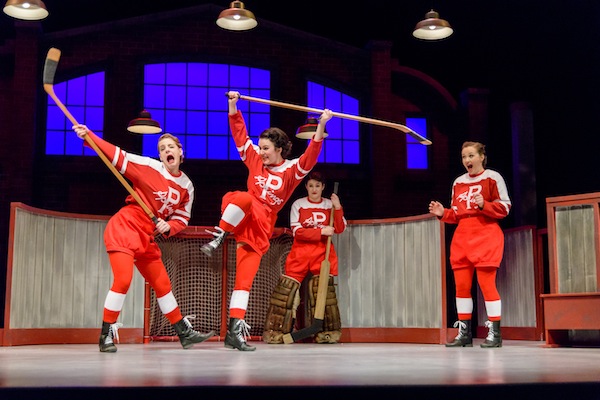 In his program notes, artistic managing director Bill Millerd recalls the Arts Club Theatre Company’s 1967 production of The Odd Couple. In those days, the Arts Club made its home on Seymour, where Vancity Theatre and the Vancouver International Film Festival are now. This nostalgia was an apt introduction to Neil’s Simon’s 1965 classic play, a multiple-award-winning comedy about two divorced men forced by circumstance to become roommates.

While some might find the premise dated – few today would raise an eyebrow at the notion of two men living together, and the sexual and gender politics that today exist are drastically different than they were in 1965 – Felix Ungar and Oscar Madison can still charm an audience. After all, at its heart, The Odd Couple is a heartwarming, amusing story about friendship.

The play opens with Oscar, a divorced, irresponsible, childish but lovable slob, hosting his Friday-night poker game for the boys. By the time we meet Felix, we know that he’s precise and punctual, but the true extent of his perfectionist, neat-freak ways don’t become evident until later.

Felix shows up at Oscar’s, distraught and suicidal after being kicked out by his (no doubt long-suffering) wife. The comedy starts to unfold as Felix’s friends try to hide their concern from him, out of fear they might cause Felix to leave or, heaven forbid, make another suicide attempt. After Oscar invites Felix to live with him – and to pay half the rent – their opposing personalities fully flower and high-energy comic chaos ensues.

Andrew McNee’s talent shines particularly bright as Oscar, a role that is dynamic and physically demanding, so potentially exhausting is Oscar’s frustration with Felix’s perfectionism, and so overwhelming his anguish at the thought of losing his best friend. Robert Moloney does a sympathetic, even endearing, job with Felix, who is bewildered after the collapse of his marriage but is also exasperated by his inability to change his own most annoying habits. Both Felix and Oscar are played with compassion, and it’s easy to root for them – a function of McNee’s and Moloney’s acting chops, but also a testament to Simon’s enduring script.

Though expectations around manhood have changed, it is still charming and satisfying to witness the camaraderie and delightful energy of a group of man friends who love – and respect – each other. Though the genre still relies on our culture’s discomfort with men expressing their emotions and fears, McNee and Moloney coax the vulnerability and honesty out of their characters, which is what makes this production so heartwarming. And, frankly, the rest of the cast – Josh Drebit, Joel Wirkkunen, Alec Willows and Cavan Cunningham – are equally terrific, as are Sasa Brown and Kate Dion-Richard, who play the Pigeon sisters with high comedy and great tenderness. This production features strong direction by John Murphy, spot-on costumes by Barbara Clayden and a clever set (including creatively amusing scene changes) by David Roberts.

The Odd Couple is at the Stanley Industrial Alliance Stage until Feb. 23. For tickets, visit artsclub.com.