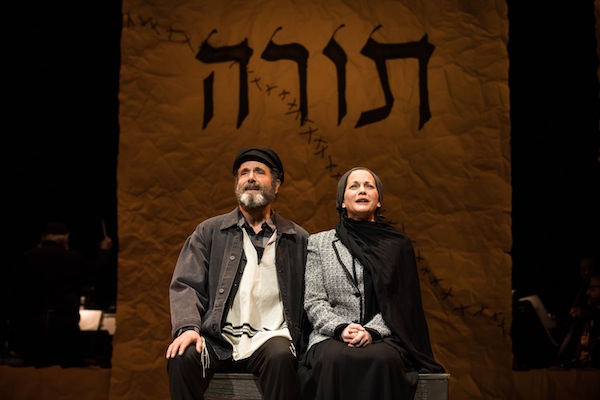 Steven Skybell and Jennifer Babiak in the Yiddish version of Fiddler on the Roof, which is slated to run through January 2020 in New York City. (photo by Matthew Murphy)

It’s no wonder the current Fiddler on the Roof on stage in New York City has been extended several times since it debuted Off-Broadway last summer. The immense draw isn’t just the splendid choreography, the well-known beloved music, the compelling, stellar cast, the emotional dialogue – it’s the authenticity that strikes a chord. Based on a collection of vignettes by Yiddish literary icon Sholem Aleichem, this production of Fiddler is entirely in Yiddish, the guttural tongue that the people on whom the characters are based would have used in real life.

This is the first time in the United States that Fiddler is being staged in Yiddish. Directed by the venerable actor Joel Grey, it opened at the Lower Manhattan’s Museum of Jewish Heritage in July 2018 and transferred to the more commercial Stage 42 near Times Square in February 2019. It’s expected to run through January 2020. It has both English and Russian supertitles.

“When Fiddler on the Roof in Yiddish first premièred last summer for a limited eight-week run under Joel’s vision, it was a show that moved people to tears and I knew it had to be seen by as many people as possible,” producer Hal Luftig told the Independent.

Set in 1905 in a Jewish shtetl in the town of Anatevka, on the outskirts of czarist Russia, Fiddler is centred around Tevye (played by Steven Skybell). He’s a poor dairyman with a wife and five daughters. Three of his daughters are of marrying age and the expectations are a matchmaker will find them a husband.

But, despite tradition, the strong-willed girls have their own idea of who they want to marry – and it’s all for love. Their marital choices give Tevye plenty of tsouris (aggravation). Eldest daughter Tsatyl (Rachel Zatcoff) marries a poor tailor in need of a sewing machine. Second daughter Hodl (Stephanie Lynne Mason) falls in love with a penniless Bolshevik revolutionary who winds up in Siberia. And though Tevye convinces his wife, Golde (Jennifer Babiak), that it’s OK to break from the matchmaker tradition, it is too much even for him when his third daughter, Khave (Rosie Jo Neddy), falls in love with a gentile – he banishes her from the family, declaring her dead.

Meanwhile, the political climate is very antisemitic. There are pogroms, and the czar is expelling Jews from the villages. At the end of the musical, the Jews of Anatevka are notified that they have three days to leave the village or they will be forced out by the government.

The original Broadway production opened in 1964 and, in 1965, won nine Tony Awards including best musical, best score, book, direction and choreography. Zero Mostel was the original Tevye. The music was by Jerry Bock, lyrics by Sheldon Harnick and book by Joseph Stein. The original New York stage production was directed and choreographed by Jerome Robbins. In 1971, there was a critically acclaimed film adaptation that garnered three Academy Awards, including best music.

The Yiddish translation was originally performed in Israel in 1965. It was crafted by Shraga Friedman, an Israeli actor who was born in Warsaw, escaped the Nazis in 1941 and settled in Tel Aviv.

In the New York production, the set design, credited to Beowulf Boritt, is simple. The word Torah (in Hebrew) is painted across the main banner and is torn apart and sewn back together as a symbol of what the Jewish people have endured.

From the very start, the audience gets drawn in when the cast forms a circle and sings “Traditsye” (“Tradition”). Another familiar tune – “Shadkhnte Shadkhnte” (“Matchmaker Matchmaker”) has the audience moving in their seats. While most of the music and lyrics are basically the same, there are some changes. “If I Were a Rich Man” becomes “Ven Ikh Bin a Rothshild” (“If I Were a Rothschild”).

While most of the cast is Jewish, some are not, and very few of the actors actually knew Yiddish before the show. Jackie Hoffman, who brilliantly plays Yente the Matchmaker, grew up with some Yiddish in her home but was far from fluent in it.

“I didn’t learn the language for my role, I learned my lines,” admitted Hoffman, who grew up on Long Island, N.Y., in an Orthodox home and attended a yeshivah for nine years. “It was difficult, but when I’m hungry to learn a role, that helps a lot. We have great coaches who are relentless. I did hear Yiddish in the house growing up, my mom and grandmother conversed, and I’m now grateful for every word I’ve learned.”

Hoffman and the cast were taught the language phonetically. Many had seen Fiddler performed in English in various theatrical productions, as well as the film. “It feels bashert this is the first production of Fiddler that I have ever been in and it is clearly the most meaningful,” said Hoffman, who has been in dozens of television shows and films, including Birdman, Garden State and Legally Blonde 2. “It merges the Jewish part of my life with the career part,” she told the Independent.

It is hard to leave the theatre without thinking of the similarities between Tevye’s Anatevka and many parts of the world today, including the United States. Jewish traditions are often challenged and antisemitism is once again on the rise.

“I don’t think that antisemitism ever went away, but it is a very scary time now,” said Hoffman. “It is mind-blowing how current the piece feels in that way.”

At the end of each performance, it’s clear by the enthusiastic applause and the long standing ovations, that the audience feels they have experienced something great. “They seem blown away by it,” said Hoffman. “They are impressed that we’ve pulled off a three-hour musical in Yiddish and they’re staggered by how pure and emotional an experience it is.”

At Stage 42 on 422 West 42nd St. in Manhattan, Fiddler on the Roof in Yiddish runs just under three hours with one intermission. For tickets, call 212-239-6200 or visit fiddlernyc.com.