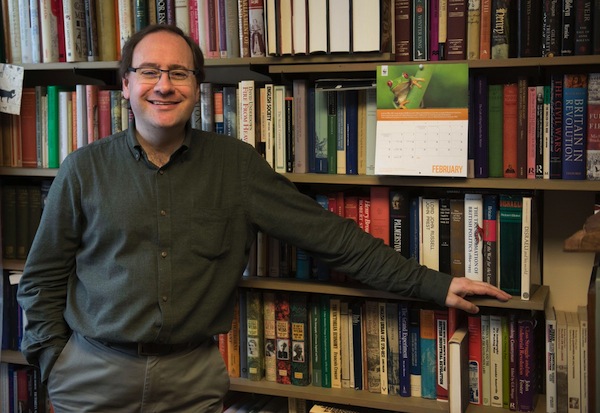 The belief in far-fetched plots is not a new phenomenon. There have always been people who gravitate towards and embrace conspiracy theories. In a Feb. 18 talk, hosted by the Jewish Community Centre of Victoria, University of Victoria history professor Dr. Simon Devereaux focused on “the golden age of conspiracy thinking,” highlighting various false intrigues of the latter half of the 20th century.

According to Devereaux, there are three principal elements to conspiracy theories that give them persuasive power among their adherents: big events must have big causes; no big event is random or accidental and must, therefore, be the result of a sinister and nebulous group’s intents or actions; and the most complicated explanation must, by its nature, be the correct explanation.

In his talk – entitled Conspiracy Thinking: A Rational Guide to Thinking Irrationally – Devereaux gave the November 1963 assassination of President John F. Kennedy as an example of “commensurate scale,” the need to equate consequential events with convoluted background planning. A 1992 letter to the New York Times by historian William Manchester was cited as both an explanation of and a counter to this tendency: “if you put the murdered president of the United States on one side of a scale and that wretched waif [Lee Harvey] Oswald on the other side, it doesn’t balance. You want to add something weightier to Oswald. It would invest the president’s death with meaning, endowing him with martyrdom. He would have died for something. A conspiracy would, of course, do the job nicely. Unfortunately, there is no evidence whatever that there was one.”

Devereaux then debunked many of the arguments employed by conspiracy theorists as reasons for why Kennedy might have been killed, including the belief that the young president was prepared to keep the United States out of Vietnam. He argued that Kennedy was a “hawkish” president who had the same secretaries of state and defence as his successor, President Lyndon Johnson.

On segueing into his second point – the inability of conspiracy theorists to accept that big events can happen randomly – Devereaux explained, “conspiracy thinkers ultimately want to believe that the world is an orderly place in which individuals are capable of keeping events under control. They don’t want to believe that the world is a sometimes chaotic place in which deeply upsetting events can happen for no apparent reason. It must, therefore, follow that some superlatively powerful group of individuals must be the directive force behind all events of enormous human significance.”

Growing disenchantment in the late 20th century of the nation state as a power to do good compounded the problem. As the United States lurched deeper into the ethical morass of Vietnam, Western governments, which were often seen as solutions to societal ills, with such programs as the 1930s New Deal, were no longer viewed as virtuous. The Watergate scandal of the mid-1970s, too, contributed to the increasingly held notion that people in government may be inherently corrupt.

Economically, the OPEC crisis and stagflation of the 1970s further demonstrated the “sad proof that government could not ensure that postwar prosperity could last forever,” and led to the presidency of Ronald Reagan and the distrustful neoconservative view of government, which continues to the present, said Devereaux.

“It is more consoling to think that there is someone in control, even if their intentions and purposes are entirely evil, rather than think there is no good explanation for the terrible things that sometimes befall us,” Devereaux argued.

To conspiracy theorists, the more elaborate and bizarre the assertions of conspiracies, the more compelling the argument. They are wont to believe, said Devereaux, that an unconventional approach to seeking answers is the right approach, and are dismissive of any reasoned proposition that runs counter to their argument.

“It is a world of amateur knowledge refusing to accept the world of professional knowledge. Any pattern of systematic, analytical thinking embodied, for instance, in a university, entails conventions,” he said.

To a conspiracy thinker, university professors represent people who are controlled; academics cannot say or do certain things without incurring professional censure. A common aspect of conspiracy thinking is to “trust no one,” i.e., “do not accept any conventional form of received wisdom.”

The rejection of conventional wisdom fuels their notions of being braver and deeper thinkers than others, as only they can follow the elaborate and frequently ludicrous connections of the conspiracy, said Devereaux. Thus, a conspiracy appeals to their intellectual vanity – they believe they are sharing hidden knowledge, therein fostering the idea that they are smarter than everyone else by not falling prey to “fake” mainstream news. Paradoxically, according to Devereaux, the more gullible the conspiracy believers, the more intelligent they think they are.

In his concluding remarks, Devereaux pointed out that there have been numerous conspiracies throughout history. However, most were either limited in their scope or inept, or both. Somewhere along the way, human nature ruins the plot; someone leaves the group, exposes the operation, or bungles the job.