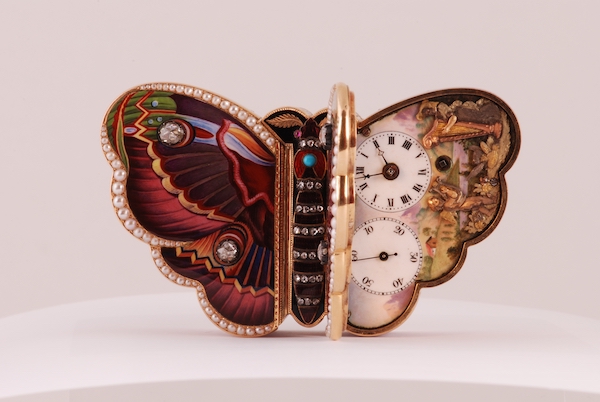 A few of the clocks that were stolen from Jerusalem’s L.A. Mayer Museum for Islamic Art in 1983, and eventually found and returned. (photos by Daniella Golan)

Over the past few weeks, many countries, including Canada, switched from daylight savings time to standard time. So, it seems like the right time (no pun intended) to talk about the biggest clock and watch robbery in Israel’s history.

Back in 1983, more than 100 antique timepieces vanished from Jerusalem’s L.A. Mayer Museum for Islamic Art. I remember visiting the museum about a year after the robbery, only to find the empty stands and cases – as if the museum staff hoped the watches would magically reappear.

For years, the Israeli police didn’t know where to go with this case. In fact, they struggled for a quarter of a century to solve the mystery of the 102 (a number of media reports stated 106) missing clocks. All that was clear was that, one spring night in 1983, these timepieces disappeared from the museum. 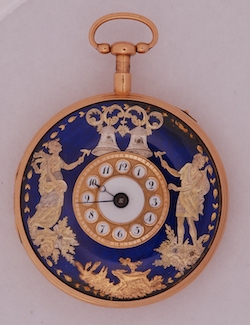 These missing clocks were not like the ones a regular person hangs on their kitchen wall or sits on their nightstand. They were highbrow antiques. Some were inlaid with jewels. Many had been cast from gold. One was made by famed watchmaker Abraham-Louis Breguet for Queen Marie Antoinette, but she met up with the guillotine 34 years before Breguet finished the timepiece – actually, Breguet’s son finished what is called an “open-work” watch.

Altogether, the stolen clocks and watches were worth millions of dollars. Given the magnitude of the theft, a special task force within the police was set up. Reportedly, Interpol was contacted, and the company that had insured the collection hired private investigators.

For years, police theorized that only a group of robbers could have taken so many clocks in one night. It turned out, however, that one thief did the job.

The alleged thief was Naaman Diller, also known as Naaman Lidor. He took advantage of the museum’s incompetence at that time. For example, he discovered that the museum’s alarm system did not work. And, while the museum windows apparently had bars, they were more for show than anything else – Diller/Lidor was able to bend a few of them. He had no difficulty entering and exiting undetected with the stolen items and placing them in his truck outside.

Many of the clocks were physically small and relatively light (i.e., pocket-size timepieces). He took most of them out of Israel. Some were hidden in Holland, some in France and the rest went to the United States. Several ended up in the home he set up in the Los Angeles area.

Despite – or perhaps because of – the great monetary value of his haul and because of how renowned some of the pieces were, Dillor/Lidor found it was hard to sell them. He only managed to sell less than 10% of the stolen collection. The majority of these timepieces spent 25 years locked up, unseen. 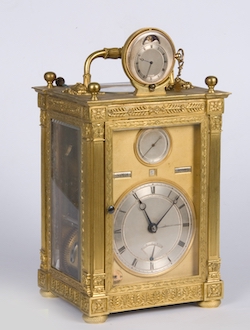 Following the robbery, Dillor/Lidor lived on and off in Tel Aviv. In the early 2000s, he reportedly was hospitalized in Israel’s Tel HaShomer Hospital, suffering from skin cancer complications. When told that the cancer had spread to the bone, he refused radiation. In 2004, he died in his Tel Aviv apartment and was buried at Kibbutz Ein HaHoresh, his birthplace. In the end, he willed the clocks to his wife, Israeli ex-pat Nili Shamrat.

Within a few years of Dillor/Lidor’s death, an attorney representing the widow entered into a quiet, negotiated “buy-back” with the museum. According to the L.A. Mayer Museum for Islamic Art, in 2006, 39 of the original 102 stolen clocks were returned.

Two years down the road, the case further unraveled. The museum officially states that investigators located the remaining clocks in various bank safes. Some media reports said the clocks had been in France and in Holland. In any case, the clocks and watches have since made their way back to the museum. Unlike almost 40 years ago, they are now well-secured, with the clock exhibit housed in a sophisticated light-sensitive vault.

In the United States, the widow was charged with receiving stolen property. In 2010, however, she received a sentence of five years’ probation and 300 hours of community service. In her defence, her lawyer successfully maintained that she was a victim of circumstances – that is, her new husband (although they’d been together for many years, they’d been married for only a year when he died) had only told her about the clocks near the time of his death.