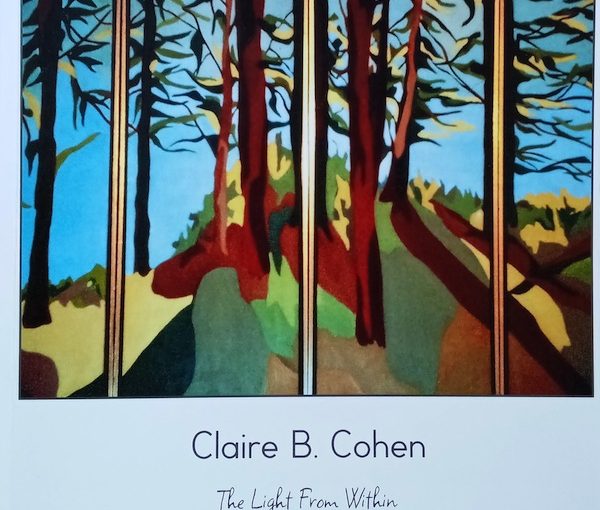 Earlier this year, Claire B. Cohen published a book of her 30-plus years as an artist. She made it for family and friends, as a record of her artistic legacy.

“Art is a powerful and a creative force of self-expression. To create art is to develop an ability to communicate visually what cannot be expressed in words.

Earlier this year, Cohen published a slim volume, mainly with images that burst from the pages, outlining her 30-plus years creating art. We glimpse the range of her work – landscapes, portraits, semi-abstracts, flowers, multimedia collages and a compartmental series, in which colourful abstract canvases were “connected sequentially in a zigzag for using piano hinges.” Flow and fun describe this series, her portraits – both colour and black and white – capture the personalities of her subjects, her landscapes and collages are bold and full of movement but also balance. The book touches on her work as an art therapist.

Originally from Israel, Cohen came to Canada in 1964. She studied fine arts at York University in Toronto and the University of Ottawa, and later earned her master’s in art therapy and counseling from U of O in 1987. She had many solo exhibits and group shows in Ottawa, and elsewhere, over the years. The book takes readers to 2006, with an exhibit list to 2009. She moved to Vancouver in 2012.

“I continued to paint after moving to Ottawa, but my move to Vancouver changed my focus, since joining my family had taken much of my time, being richly involved with newborn grandchildren,” said Cohen. “However, I still continued painting and showing new work in Vancouver galleries, as well as donating paintings to different organizations in Vancouver, such as hospitals, Louis Brier [Home and Hospital], friends, and creating more collages and multimedia-based work. I participated in group art shows and sold some to the public.”

Cohen said her reason for producing the book “was to create a place to keep all of my art as a legacy to leave to my family in remembrance of my story. COVID times were affecting my spirit, my mood was down and … the idea came about to focus on creating the book for my family and friends.”

During the pandemic, Cohen said she started to lose her connection to creativity.

“Friends cut off from each other, as much as children and family,” she said. “I slowly lost my energy and interest, as well as the need I once had to be close to my easel. The paints, the brushes, the colours all lost their meaning and the need I had to paint slowly deteriorated.”

She began to look back at her past, which, she said, “led me to wake up from my dormancy and questions such as ‘what is my meaning of life?’ I discovered my paintings in storage and wanted to create a book.

“I reflected further on my body of work and questioned: why did I dedicate my years to painting? Was there any purpose to it? The answer eventually arrived – yes. There are many purposes to be alive, and work as an artist, investing my life in art. In my case, most of it was to leave a memory to my next generation.”

Cohen’s most recent exhibit and sale was at Britannia Community Centre in 2021. Art can be cathartic, whether one is making it or experiencing it.

“The process of creating art has a great intensity and full force of emotions that lead to a freedom and release when the piece is complete,” she explained. “Looking at these pieces that I created many years ago leads to a sense of nostalgia and a softening of that intensity. These pieces have followed me through many moves and lives, and have a story of their own that has evolved with the emotions that once created them. The language of art cannot be explained in words, the language of these emotions is form, line, colour and brush strokes.”

This language can help heal, as Cohen well knows from her art therapy practice.

“The more we know about ourselves, the more we learn to grow and develop our abilities to stand our ground,” she said.

Describing art as “a powerful and unique way to explore our creative forces,” she explained that people who participate in art therapy use the “materials to express the self and communicate visually,” composing stories. In a group setting, they “collaborate and share with others … connect and integrate parts of his/her inner self, gain confidence and reduce stress in a supportive environment, with the aid of the instructor.”

It was both a dream and a need for Cohen to do art therapy and counseling.

“I realized that art is not just for selling and decorating homes, rather it was a way to find myself, to grow and see who I am, and to help others with their healing.”

To see Cohen’s body of work, go to clairebcohen.wixsite.com/portfolio/home.

Artwork from a participant in an exhibit by the Society for the Arts in Dementia Care. (photo by Baila Lazarus)

As the population ages, there will be more adult children, caregivers, seniors homes and other centres caring for loved ones or patients whose memories are failing.

For many years, it’s been believed that there is little that can be done to slow such degeneration. We’re told that, if we challenge ourselves with puzzles or other intellectual games, this might have an effect. But, one woman has been investigating a different option – one that started out facing a lot of skepticism by those working in the field but has been slowly gaining acceptance.

Dalia Gottlieb-Tanaka didn’t set out to become an expert in the conditions of dementia, but life brought her onto this path, which she embraces with passion … and compassion.

Born in Israel, Gottlieb-Tanaka actually started out in a drafting career with the Israeli navy and studied at the Bezalel Academy of Arts and Design, where she met her husband, Mineo, who was from the Okanagan. They came back to Canada in 1975 to study at the University of British Columbia, where she did a master’s degree in architecture. The two are both semi-retired now and share their residency between Vernon and Vancouver.

In 1990, Gottlieb-Tanaka volunteered to spend time with a woman living with dementia and that subsequently led to her present occupation. This was a pivotal turning point in Gottlieb-Tanaka’s career.

“I went there and fell in love with this woman. She was so lovely and we could talk about anything in the world,” said Gottlieb-Tanaka.

Over time, Gottlieb-Tanaka noticed there were situations in which the woman demonstrated a lack of memory and no conception of the consequences of certain actions.

“Then it clicked,” she said. “It’s unpredictable. There are good and bad days.”

She became fascinated and started to immerse herself in the study of what she refers to as a medical condition, not a disease.

She learned that there are 72 different types of dementia, of which Alzheimer’s affects the largest number of people; that dementia is characterized by confusion and memory loss; and that it can be brought on by stress or depression.

“You can meet people with dementia who are very, very normal, but they might have memory issues,” she explained. “It doesn’t mean they’re mentally ill, and only now people are understanding the difference.”

Eventually, Gottlieb-Tanaka took her studies to UBC, where she completed a PhD in the Institute of Health Promotion Research and the Interdisciplinary Studies Program. In 2011, she completed a post-doctoral fellowship with the department of psychology.

Her goal was to assess the creative abilities – singing, art, flower arrangement, among others – of people with memory loss to determine how those activities were affected, and whether an increase in those activities could make a difference in staving off the development of these medical conditions.

“So what if someone has memory loss?” she said. “Does it mean they don’t like listening to music?”

Despite a steep learning curve, Gottlieb-Tanaka started to make inroads. She eventually developed the Creative Expression Activities Program for seniors with dementia, for which she won an award from the American Society on Aging. She also founded the Society for the Arts in Dementia Care in British Columbia, which just celebrated a 10-year anniversary.

Among the activities of the society are exhibits of artwork by people suffering from dementia. In its first year, the society’s exhibit was held in North Vancouver and 4,000 people came.

“They were amazed by the results,” said Gottlieb-Tanaka.

The society also runs an annual international conference on creativity and aging, which takes place this year in Vernon, Sept. 8-10.

Trying to pursue her research has been an uphill struggle because Gottlieb-Tanaka was constantly breaking new ground. In some cases, people thought she was crazy. Slowly, however, her ideas are gaining acceptance.

Originally, her work focused on bringing the arts to dementia sufferers; now, she’s looking at how such activities might prevent the onset of those conditions, and she’s showing that such memory loss might be delayed by up to two years.

As her research becomes more known, Gottlieb-Tanaka is trying to pass the torch to those working with people with dementia – nurses, art therapists, music therapists, elder-care facilitators and seniors advocates. That’s the goal of the upcoming conference in Vernon, which offers presentations and hands-on workshops and includes a keynote by Isobel Mackenzie, seniors advocate with the B.C. government. It’s been a 25-year battle, but it seems people are finally starting to take notice.

For more information on the conference, visit cecd-society.org.

Baila Lazarus is a freelance writer and media trainer in Vancouver. Her consulting work can be seen at phase2coaching.com.