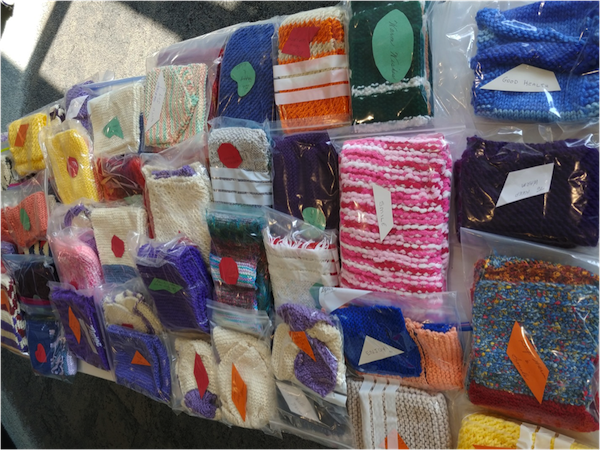 The finished scarves, each individually packaged, and including a warm message. (photo from Legacy Senior Living)

Last month, residents of Legacy Senior Living (the Leo Wertman Residence) gave a gift of warmth to residents of New Beginnings, a temporary housing complex for Indigenous individuals. On Oct. 7, nearly 100 hand-knitted scarves, each with an uplifting message – such as “Warm Wishes,” “Smile” and “Enjoy!” – were delivered from the independent living retirement home in Vancouver’s Oakridge area to the housing complex, which is located at Heather and 33rd.

The idea for the project came almost a year ago. It was organized in January, and jumpstarted by a $200 grant from the Vancouver Foundation to fund the purchase of wool. Between 10 and 20 residents regularly participated; some teaching others how to knit, others brushing up on their knitting skills. They worked together while socializing, coming together weekly for a knit-and-chat session.

“When my mother lived at Legacy, I used to knit with her for therapeutic purposes,” said Annette Wertman, who organized the effort. “Then, I thought, maybe knitting would be a good activity for the residents of Legacy Senior Living. We had a meeting of those interested – and the idea took off! We applied for a grant and were so pleased to receive one from the Vancouver Foundation. While the COVID lockdown altered the way we gathered to knit together, we followed the health protocols and still managed to knit 98 scarves! And it’s perfect that we finished this in October, a more appropriate time to donate these scarves.”

Not only was it a more appropriate time weather-wise, but the donation took place around Thanksgiving. The Legacy knitters were grateful to be able to make “a small but warm contribution to the community.”

“Our residence, built in memory of Leo Wertman, is a vision of inclusion, diversity and philanthropy within the Jewish community, and of our broader local community,” said Wertman, a cousin of the residence’s namesake. “We all felt very good about our project and have already begun the next project – toques and blankets!”

Among those celebrating L’Chaim’s 30th anniversary were original board members, left to right, Sylvia Gurstein, Gloria Hendin and Marion Poliakoff. (photo from L’Chaim)

More than 70 people gathered recently in the L’Chaim Lounge at the Jewish Community Centre of Greater Vancouver to celebrate the 30th anniversary of L’Chaim Adult Day Centre, which provides a “day out” for usually home-bound elderly Jews.

The audience was welcomed by Annica Carlsson, L’Chaim administrator, and Claire Weiss, acting president of L’Chaim, who described its growth. Originally offered at Beth Israel Synagogue, the program had to move to larger quarters at the J in 1995. It now provides programming three days a week, adding up to more than 1,900 client days a year for older adults who can still function with some degree of independence, but are unable to attend other community activities. L’Chaim also initiated a program for Jewish seniors in Richmond, which was taken over five years ago by Chabad of Richmond.

Speaking at the 30th anniversary celebration were three of the program’s founders: Sylvia Gurstein, Gloria Hendin and Marion Poliakoff. Poliakoff described how she represented National Council of Jewish Women in the beginning, enlisting a partnership with the late Irma Zack, who was acting on behalf of the Jewish Family Service Agency. Other present and former board members told anecdotes about their involvement, praising the staff and programming.

At L’Chaim, speakers on timely topics, music and exercise have always been program highlights. Current activities also include the use of iPods and headphones, which were purchased with a donation in memory of Dr. Betty Horodesky. This donation also financed the purchase of new lift chairs and a commercial cooler.

L’Chaim participant Ekatarina Chernyavskaya, 92, gave a heartfelt speech about how the program is her “home away from home” and enables her to stay connected with the Jewish community.

For more about L’Chaim, visit lchaim.ca.