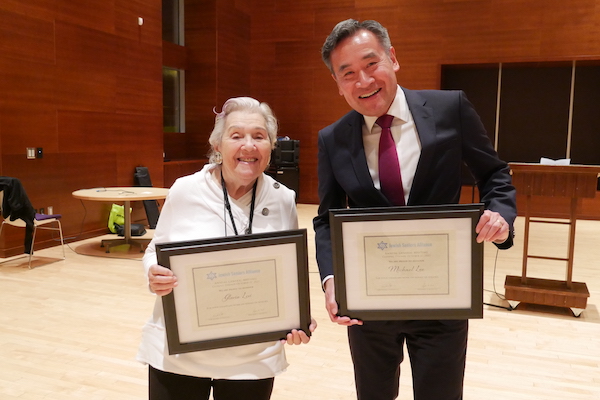 Gloria Levi and Michael Lee were honoured by Jewish Seniors Alliance for their contributions to the well-being of seniors in the community, as was Dolores Luber. (photo from JSA)

When you looked around the room at Congregation Beth Israel on Nov. 27, the pandemic of the last two-plus years would not have crossed your mind. The room was filled with more than 100 happy guests enjoying dinner together.

The occasion was the 15th annual general meeting and gala for Jewish Seniors Alliance of Greater Vancouver. Three people were honoured for their contributions to the well-being of seniors in the community: Dolores Luber, Gloria Levi and Member of the Legislative Assembly Michael Lee.

Then, Ken Levitt introduced Luber, the editor of Senior Line magazine. She is the first winner of the JSA Star for her commitment to enriching the lives of seniors through articles, book reviews, film reviews and news. Luber, who has served as the editor of the magazine for 10 years, emphasized the free hand she enjoyed in choosing the topics of the articles, artists’ profiles and other material for the magazine. Her goal was to enlarge the scope of the publication, so that it included people from many cultures and ethnic backgrounds. She was awarded a collage of select covers of Senior Line, with her and her dog, Kesem, in the centre of all the covers, which reflect JSA’s culture of diversity and support.

Levi was introduced by her friend Jane Heyman, who spoke about Levi’s fascination with seniors at the young age of 30, when she worked with the Golden Age Club. Levi went on to develop provincial programs for seniors. She is also the author of six books, most recently the creative memoir The Hotel Keeper’s Daughter, which was published this year.

Levi thanked JSA for the honour, as she received a standing ovation. She spoke lovingly about Haber, who would never take “no” for an answer.

Lee was introduced by Grace Hann, a trainer for the JSA peer support program. He was honoured for his ongoing work with seniors. Elected MLA for Vancouver-Langara in 2017 and 2020, he, along with Andrea Krombein, has launched the South Vancouver Seniors Network. This network has sponsored more than 100 webinars connecting seniors with various topics of interest and with one another.

Lee met Haber and Levitt in 2016. He was impressed with Haber’s passion and commitment and recognized the JSA as a leader in the development of seniors organizations in Vancouver.

Tamara Frankel, co-chair of the event, presented Gyda Chud and, in absentia, Larry Shapiro, with a gift in appreciation of their leadership as co-presidents of JSA over the last three years. A short video by incoming president Tammi Belfer, who spoke from Israel, was screened.

Following the dinner by Nava Catering, the winner of the 50/50 raffle was announced by Frankel – who was shocked to see that she was the winner. Frankel donated her winnings to JSA; the raffle raised more than $1,000.

Tamara Frankel is a member of the board of Jewish Seniors Alliance and Shanie Levin is a JSA Life Governor. Both Frankel and Levin are on the editorial committee of Senior Line magazine.