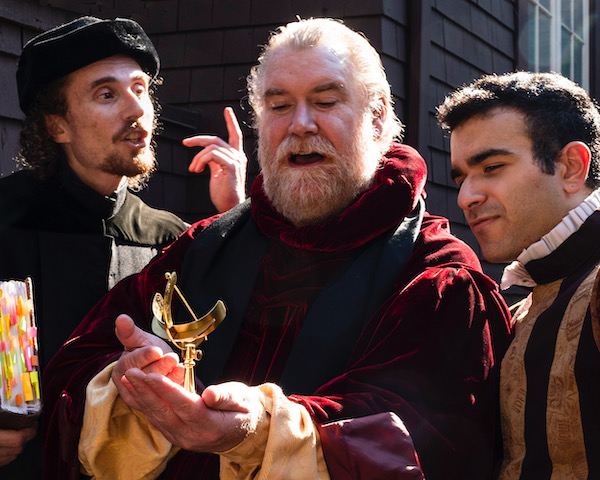 The play Wittenberg tackles heady subjects – skepticism or faith? Divine plan or free will? – with fast-paced high- and low-brow humour, mixing the serious and the silly, an actual historical figure with characters from literature.

The play, described as a prequel to both Hamlet and Doctor Faustus, is set in the year 1517. Luther (whose writings would spark the Protestant Reformation but who also would become viciously antisemitic) teaches theology at the University of Wittenberg. His colleague is philosophy professor John Faustus (who has yet to make his deal with the devil for knowledge and pleasure, as he does in Christopher Marlowe’s Doctor Faustus). They debate each other and attempt to sway the views of one of their students, Hamlet (the indecisive Prince of Denmark penned by Shakespeare).

Hamlet has returned to school, in crisis after having studied Copernicus’s radical new theory of the universe, that the earth revolves around the sun. Meanwhile, as the play description explains, Faustus “has decided to make an honest woman of Helen, once ‘of Troy,’ aka ‘the Eternal Feminine,’ but she prefers her freedom” and Luther “is outraged at the abusive practices of the church to which he has sworn obedience.” In a college tennis tournament, Laertes (another character taken from Shakespeare’s Hamlet) competes against Hamlet for the championship title.

Wittenberg is Kobiliansky’s debut with United Players, but he is a veteran actor. When asked how he got into acting, he said, “That’s a nice story I like to tell. Back in the day, my mother worked as a piano player for the Moscow Art Theatre and she used to take me backstage with her when I was little. I remember watching a few plays from behind the scenes and watching actors go on and off stage – the atmosphere there was incredible! I was ‘scarred’ for life.

“A few years after, our family moved to Israel and somehow acting studies never came up, until I was in my early 20s. There were a few of us, theatre enthusiasts with no acting experience, and this very seasoned director who recently came to Israel from Ukraine. He wanted to find a young group of people and do some theatre together. He worked us through a pretty rigorous acting course for about a year and then we actually staged a few plays. Those were great times.”

Prior to winning the role of Luther, Kobiliansky was only minimally familiar with the historical figure on which his character is based.

“All I knew was that he led the Reformation and that the Lutheran Church is named after him,” said Kobiliansky.

While Luther’s antisemitism is a matter of historical record, with catastrophic consequences, of his concepts that a non-Christian might be sympathetic to, the actor said, “Well, Martin Luther’s relationship with God and his struggles with faith can apply pretty much to any religion, I think…. His anti-indulgence protest could be compared to any anti-corruption movement anywhere in the world, where those in power take advantage of their position for personal benefit, by pushing an ideological concept to an extreme.”

Limiting his comments to the character of Luther, as depicted in 1517, Kobiliansky said, “The thing I probably love the most about Martin Luther’s stance in this play – he stands for filling life with purpose as opposed to freedom and progress (represented by Faustus). Progress is a nice concept, but progress for a progress’s sake gets you nowhere.”