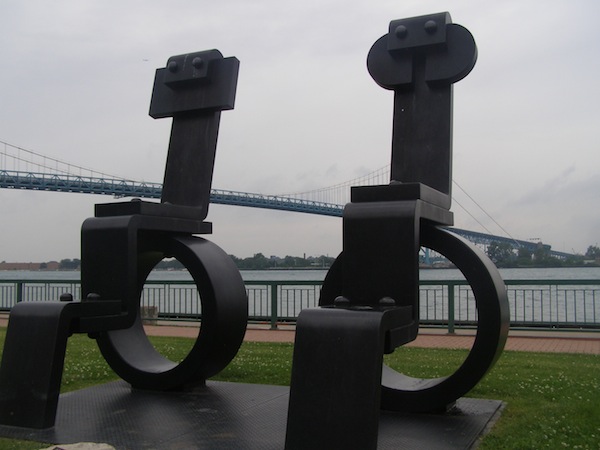 Sorel Etrog’s sculpture in Odette Sculpture Park, in Windsor, Ont. Etrog was one of four artists featured in Prof. Jennifer Eiserman’s March 7 lecture, Is There Such a Thing as Canadian Jewish Art? (photo by Matt Glaman)

Is there such a thing as “Jewish art” in Canada? Dr. Jennifer Eiserman explored this question in a March 7 Zoom lecture organized by Victoria’s Kolot Mayim Reform Temple.

Eiserman, an artist and an art professor at the University of Calgary, shared some of the preliminary findings of her investigation. She pointed out that, with respect to the concept of “Jewish art,” she was not referring to Judaica or Jewish themes in art. “I’m curious about whether artists with some kind of Jewish background make art that is qualitatively different from other artists. If so, I am interested in how these Jewish artists speak and think Jewishly,” she explained.

She began by providing a background to Canadian art history and, specifically, how it has been taught. There has been a profound shift, to put it mildly, in focus, she said. Prior to 1990, the study of Canadian art was a colonial one, concentrating mostly on male artists of European descent. Now, the works of women, Indigenous people and others are part of the curriculum.

Eiserman then discussed four artists and how they speak both Jewishly and as Canadians. She started with sculptor Sorel Etrog (1933-2014) and his contribution to Canadian Modernism. Etrog was a Romanian-born Holocaust survivor who spent time in Israel before immigrating to Canada. His biography is one of movement from place to place.

“The way I see Etrog speaking Jewishly is through the tension between tradition and innovation and the notion of interweaving roads, the idea of the new, which occurs in Etrog’s work,” Eiserman said.

His work, she added, also speaks Jewishly, in that it maintains certain core principles of the genre of public sculpture while addressing the contemporary context in which the sculpture is being placed. Just as we place Jewish law from generation to generation into contemporary contexts, Etrog’s art innovates while carrying on traditional elements.

The figurative art of Betty Goodwin (1923-2008) was demonstrated as being the work of “an outsider, someone not part of the Old Boys’ Club and one who had to find her own way.” Her work, according to Eiserman, contributed internationally to how drawing was defined and what it was to become.

Sylvia Safdie’s video installations of flowing water, sand, light and sound advance the traditional concerns of Canadian art with landscape and nature, most commonly associated with the Group of Seven. Safdie was born in Lebanon in 1942 and her family moved to Montreal in 1953.

Safdie’s video can be perceived as exploring a variety of themes that allow her to bring her own voice into the world. “Her work is part of a post-colonial narrative in which some people have experienced harm as the nation of Canada came into being, and speaks Jewishly of the central issues of living in the Diaspora – how to adapt and yet maintain our identity,” said Eiserman.

The distinctively Jewish fantastical creatures of sculptor David Altmejd (born 1974), who represented Canada at the Venice Biennale in 2007, were the final set of slides shown by Eiserman. She described Altmejd as the “quintessential 21st-century Canadian artist. He is bicultural, multilingual, internationally known and now lives in another country (United States) yet is still deeply rooted in Canada.

“Life is complicated, Altmejd reminds us, we can’t have the good without the bad. Yet, always in his work, life shines through. While he rarely discusses his Jewish roots … one can see that his works speak Jewishly in many aspects,” Eiserman said.

Growing up in Montreal, Eiserman experienced the national influence that the Saidye Bronfman Centre had in disseminating Canadian Jewish art. She received her bachelor’s in art history and master’s in education through the arts at McGill University in Montreal, and a bachelor’s in fine arts (visual art) at the University of Regina in Saskatchewan. Her doctorate, one of the first to use studio art as its method of inquiry, is from the University of Calgary, where she is now an associate professor. Her current research is in North American contemporary Jewish art and community-based Jewish art.

In her artistic endeavours, Eiserman uses mixed media, crochet, watercolour, installation and public art projects to explore issues related to Jewish theology, philosophy and identity. She refers to her work as “visual Midrash, an artistic response to sacred Jewish texts.”