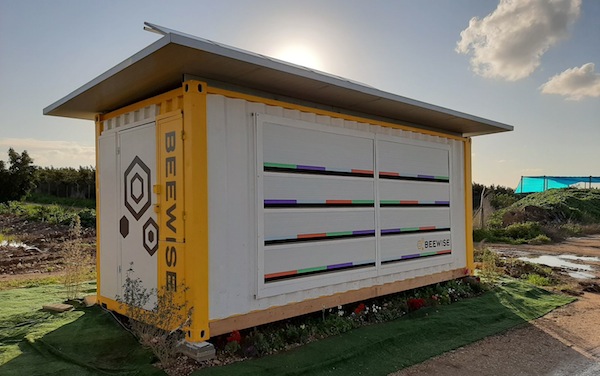 What do cucumbers, avocados and coffee all have in common? Aside from being absolute necessities (yes, avocados, too), they’re all crops pollinated by bees. And, if things keep heading in the current direction, we’re screwed.

Bees are extremely important. About one-third of all plants and plant products consumed by humans are dependent on bee pollination. Unfortunately, the combination of modern demand and natural stresses such as climate change, pests and illness mean that the global bee population is dying at a dizzying rate, endangering our diets and well-being.

To combat this, efforts are being made to rehabilitate the bee population. In Israel, these endeavours are given a very Start-Up Nation twist, complete with computer vision, artificial intelligence and precision robotics, which are all part of the world’s first autonomous beehive, developed by Israeli start-up Beewise. Called Beehome, it’s a device that can house up to 40 bee colonies – that’s two million bees – and take care of their health and upkeep through an app on the beekeeper’s phone or tablet.

The idea for an autonomous beehive came from Safra’s business partner, Eliyah Radzyner. A beekeeper by profession, Radzyner was aghast at the fact that beekeeping methods have not progressed for ages. He was convinced that a computer, machine or robot could do a much better job, and joined forces with Safra, a serial entrepreneur.

At present, most beehives around the world look like they did some 150 years ago – plain wooden constructions whose upkeep requires beekeepers to dress in full hazmat mode and light a smoker before opening them up, taking care of pests, supplying the bees with food and water and harvesting the honey. All this extensive manual labour means that commercial beekeepers, who take care of most of the bees in the world, only get to each hive about once every few weeks. Lots of bees are lost in between rounds to illness, pests and other problems.

“If you manage to identify the problem at the outset and take care of it in a specific manner, then, first off, it will be a lot less invasive; second, you’ll resolve the problem before it becomes a concern; and, third, you’ll save the bee,” Safra explained.

“We built a beehive that knows how to do these things,” he said, listing its three main components: artificial intelligence, computer vision and precision robotics.

The first, he said, is in charge of recognizing and identifying problems at the very outset. A real-time response is then carried out using computer vision to detect and monitor the situation, with precision robotics executing the required solution. The only things in the autonomous hive that require a human hand are filling the water and food and collecting the honey, which is harvested by machine.

While there are other companies trying to take care of bees amid the crisis, no one else has built an autonomous beehive. Currently in beta stage, Beehome is now being used by some commercial beekeepers.

“At first, there’s skepticism, because it’s so left-field,” Safra noted. “The moment we show people the device and that it works, there’s unbelievable excitement.

“There are beekeepers who are second, third or fourth generation. The beekeeper sees how his business is disappearing before his eyes, on his watch,” he added. “Then you suddenly show him this technology, this solution, and he sees that it works. Imagine what a relief that is.

“The idea that we’re saving bees using technology is an amazing thing,” Safra said. “When you take AI and apply it to traditional industries that haven’t been touched in 150 years, the yield is incredible.”

The funding for Beewise came from venture capital funds, as well as from European and Israeli grants. And doing business in Israel has been wonderful, said Safra, who returned to the country some two years ago after 15 years in the United States.

“The ecosystem in Israel is amazing. It’s simply optimized for start-ups,” he said. “There’s also a crazy infrastructure in terms of services and everyone knows how to work in startup mode.”

Beewise aims to be the new standard, Safra said. “There are 90 million beehives around the world. They’re all wooden beehives that don’t work anymore.

“We’re doing well by doing good,” he concluded. “Every hive that I create and which functions and succeeds – the result is more bees alive.”