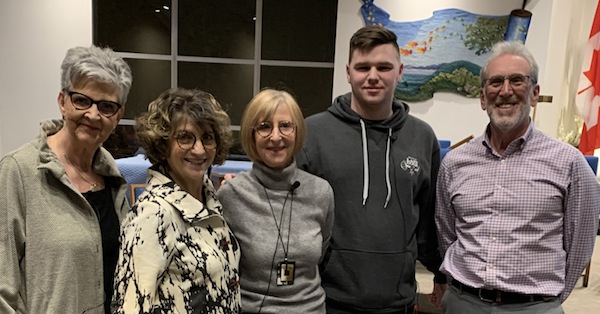 The capacity for transformation and healing was front and centre at the event Optimism and Hope: Erasing Stigma of Mental Illness, Addiction and Homelessness.

Temple Sholom’s Rabbi Dan Moskovitz welcomed those gathered by talking about the Aleinu prayer, which, he said, asks us “to go out into the world and do what we’re praying for. And so, if I can make a request of all of us, myself included, it’s to go out from this room and to do and to share what we’ve learned and what we’ve heard tonight with our families and with our broader circle. That’s our shlichut, that’s our sacred mission, beyond just coming here today to get what we need for ourselves.”

JACS Vancouver board chair Howard Harowitz briefly described the missions of each of the event sponsors before introducing the night’s speakers, beginning with Rivkin, who shared the stories of a few community members who have been impacted by the risk of homelessness. She prefaced her remarks by saying homelessness is not limited to people living on the street or who live in shelters. Rather, the growing concern in our community is “relative homelessness, the lack of suitable, consistent and predictable housing,” she said.

She also noted that “it is not a natural equation that addiction, mental health and homelessness are faced by all people” in need. “Each person has to be approached individually and uniquely,” she said, then listed six sources of support in our community: JFS, Tikva Housing, Yaffa Housing, JACS, the Kehila Society of Richmond and the community’s synagogues.

Originally from Regina, Sask., Allen has lived in Abbotsford for a long time. She lives in an area where homeless people have gathered since the Salvation Army moved into the neighbourhood in 2004. A wife and the mother of two children, the situation was very difficult initially. She shared stories of her young granddaughter witnessing people having sex and shooting up, and of being chased out of her home by a crack addict.

Allen said she became very depressed. Then, she was invited to a meeting at city hall about the homeless. She challenged attendees to come and see the extent of the problem for themselves, and two women from Fraser Health took her up on it. Over coffee, Allen shared with them her concerns and, despite her self-described antagonism to them, they invited her to speak at a meeting of the Drug War Survivors, a peer-based user group that participates in the development of harm-reduction policies, among other things.

Reluctantly, she agreed. Expecting an audience of maybe 10 drug addicts, “there were 110 of them,” she said. “I look around and I open my mouth and I just let it all out. I don’t know what happened, it was a miracle, really. I talked about my father and I talked about him beating my mother so desperately,” waking Allen’s sister, who was told to return to bed by their mother, and did. “That’s what we were raised with,” said Allen. “I had never spoken about it, and I just let it all out,” including how she was kicked out of a school in her teens for selling drugs.

After her remarks, audience members lined up, but she didn’t know why, so she started to leave. “As I’m walking out, the first guy comes up and hugs me. They were all standing there to hug me,” she said, holding back tears.

One of the men recognized Allen from secondary school. He shared with her that he was raised with such anger that he went down the path of drugs, whereas she – who his family warned him about as a teen, since she sold drugs – did not. He said to Allen, “I see now that I, too, can change my life.”

This interaction, she said, changed her life. “I went home, and I was walking up the driveway to get the mail and this crazy lady that lived on the street and was a huge drug addict and was nasty and did not like me, she came running up my driveway swearing and yelling at me with this other guy. I was so emotional, I went running at her, I don’t know what I was going to do, and I stopped. I changed my mind. I turned around and I went home. And my life changed. Everything on our street is still happening and nothing has changed much there, except me.”

Allen started giving to the homeless. She joined the city’s Business Engagement Ambassador Project, which works to build relationships between Abbotsford residents, business owners, homeless and others to strengthen the sense of community. “What I do is I speak all over the place and raise money to help them help themselves,” she said of those who are homeless.

The project is a year-and-half old and she described it as a success. One aspect in particular that is working, she said, is that the program pays homeless people to clean up area businesses and parks.

The last speaker, Bowman, now 22 years old, has been clean for just over four years. He is a youth program support worker at Last Door, the centre at which he was set on the path of recovery.

Bowman said he had a good upbringing, went to Jewish summer camp and day schools, was into sports, has lots of friends and has a great family. Having lost his mother to cancer when he was 10, he said, “That was obviously tough, but by no means do I point my finger at that and say, ‘that’s when I started using drugs.’”

He described his life as normal, living with his dad and brother. There were no indications, he said, that he would become an addict. Addiction does not discriminate, he said, and people need to know that. His family, he said, were completely surprised to find out about his drug use and were “unversed in the topic of addiction.” Luckily, he had a cousin who works as a drug and alcohol counselor and “she saved the day” when it came to him seeking help.

At age 14, Bowman started to experiment with marijuana. He couldn’t say exactly why he started using harder drugs, but perhaps he had just gotten in with the wrong crowd. He described the process as progressive. “It went from using once in awhile to using every day, to doing whatever it takes,” he said.

“I’m not going to get too much into the things I did to get to get high every day but it definitely involved a lot of stealing from the people very close to me. It didn’t matter if you would love me, if you would hate me, if you were older, if you were younger, if I had the chance, I would try and rip you off if I was with you, and that was the reality of my life.”

From age 16 to 18, he was using opiates every day, while still going to school, while still trying to cover up that he was an addict. “I wanted help, but I didn’t,” he said. “I wanted help because I knew in my mind that I could be a better person than I’m being right now but, in the other part of my mind, I was scared and I wanted to keep getting high.”

The breaking point came when he stole a significant amount of money from his brother. From that day, when his brother reacted with love rather than anger – Dec. 22, 2015 – the efforts at recovery began, with the help of his father, brother, cousin and others. There were a few false starts, a couple of detox and treatment centres, before he landed at Last Door in mid-January 2016. He has not used drugs since.

Waiting times and the cost of treatment were among the topics discussed in the question-and-answer period. Giuseppe Ganci, director of community development for Last Door Recovery Society, was in the audience. He explained some of the different levels of care, ranging from assisted living residences, for which there are minimal guidelines, to treatment centres, which will have psychiatrists and other professionals on site. The definitions of the levels differ between regions in the province, he said, making the system hard for people to understand and, therefore, access.

“The problem is,” he said, “you always hear there are not enough beds in British Columbia. That’s actually a myth. There are so many beds. Last Door runs probably at 80% capacity every day [and has] for years. We have about 100 beds and only 35 of them are funded [by government]; the rest, there’s no funding for them, so it’s a shortage of funding for treatment, it’s not a shortage of beds.” This means that people who can afford it are able to get treatment within 24 hours, rather than join the queue of six to eight weeks or longer, he said.

After a couple more questions, Harowitz wrapped up the event. Addiction is not a choice, he stressed, citing JACS speaker Steve Whiteside. “It’s not a weakness of character, it’s not anything other than any other kind of disease that people have,” he said, challenging the audience “to keep the conversation going.”