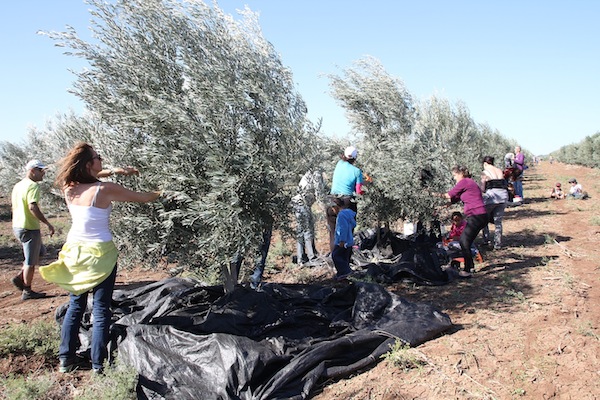 Volunteers help pick olives on a windy day in the fair trade grove of Emek Yizrael. (photo from Yoram Ron)

Olives for making oil are picked around December or January, so it is probably no coincidence that Chanukah comes so close to the picking season. As you know, Chanukah’s miracle revolves around the story that a very limited amount of olive oil burned in the Temple menorah for eight nights.

While the olive branch is a symbol of peace, the olive harvest in both Israel and the Palestinian territories is a challenging time. For Palestinian olive growers, extremist settlers and Israeli government policy have turned their harvest into an uncomfortable, if not a physically and economically dangerous event. Documented cases show some settlers assaulting Palestinian farmers – threatening them, driving them off their own land, physically attacking them or throwing stones at them. Sometimes, settlers vandalize Palestinian vehicles and damage farming equipment. In other cases, settlers jump-start the harvest, stealing the fruit from hundreds of trees. In the saddest of cases, settlers vandalized hundreds upon hundreds of Palestinian olive trees, in what appears to be a gross violation of Deuteronomy’s 20:19 bal tashchit precept. In this law, we may not uproot or cut down a fruit tree if we do not have an acceptable reason to do so. In the early part of last year’s harvest, the Office for Coordination of Humanitarian Affairs reported that 25 Palestinians were injured, more than 1,000 olive trees were burnt or otherwise damaged and large amounts of produce were stolen.

Since the construction of the separation barrier, some Palestinian olive growers have ended up with their groves located on the other side of the barrier and farmers must obtain special permits and go through special gates to get to their trees. The B’Tselem Organization has documented situations in which Israeli soldiers have blocked the access gates or held farmers up, and there have been reports that soldiers have used anti-riot material on the growers.

In a few cases, the separation between olive groves and homes means that growers have to travel some 25 kilometres round trip. Moreover, the growers are given fixed times to get to their trees and, sometimes, the periods available are not long enough to finish all the picking. Related, Palestinians are sometimes put into a situation in which they have to pick their fruit while the olives are still strongly attached to the branches. Olive picking is largely a manual procedure, so, to dislodge the unripened olives, growers either hit the trees with a rod or shake the trees very hard. This can result in damage to both the trees and the olives.

The current pandemic has caused financial havoc all over the world, including in Israel. This harvest season, Jewish Israeli olive growers have had tons of olives stolen. In the Emek Yizrael area, the Border Police found about 10 tons of olives in a nearby sheep pen. The olives had already been bagged and the gathering containers were standing to the side. The alleged thieves live in Zarzir, a village some 10 kilometres from Nazareth. Shomer Hachadash (the New Guard) tries to prevent these incidents using dogs and heat-sensing drones for nighttime surveillance. Some very bold olive thieves have even been spotted in daylight hours.

Despite this gloomy picture, however, there are promising things happening in Israel’s olive industry. Kfar Kanna’s Sindyanna is an olive oil producer. The Galilee operation is a certified fair trade establishment. In addition, it is a nonprofit organization with strong social and political commitments. Their olive oil bottles proudly say that the oil is produced by Jewish and Arab women in Israel.

Sindyanna aims to improve the working conditions and livelihoods of local Arab women, a clearly marginalized group. For example, Sindyanna provides employment training for Arab women. On the political level, Sindyanna is committed to inter-religious understanding by contracting Muslim, Jewish and Christian women. Moreover, the growers who sell their olives to Sindyanna, like the population of the Galilee itself, are a mix of ethnic groups.

Hadas Lahav, Sindyanna’s chief executive officer, said the company strongly affirms sustainable farming. Over the years, it has built strong connections with local farmers, buying olive oil directly from about 100 individual farmers and large family groups. Some of the farmers are organized into large family companies, like Al-Juzur’s seven families of the Younis clan. In Deir Hanna, the 2,500 organic olive trees belong to the Hussein family. In the Birya Forest, there are 10,000 organic olive trees maintained by Hussein Hib.

As Lahav pointed out, with olives, there are good years and less good years. The 2020 harvest was significantly smaller than the 2019 harvest. In a way, it was fortuitous that 2020 produced less fruit, as, with COVID-19, few permits were given to seasonal pickers entering Israel from the West Bank.

The olives picked for Sindyanna’s products are Coratina (this olive tree is highly adaptable and produces abundantly in hot dry climates, including rocky soils), Barnea (this olive was bred in Israel for oil production, but is also used for green or black table olives) and Souri (olives that are native to Israel and have been the major variety cultivated traditionally under rain-fed conditions in northern Israel). On average, in irrigated groves, a tree produces five kilograms of olive oil and, in a non-irrigated grove, a tree produces three kilograms of olive oil. The olive oil is kosher.

Here are some factoids about Sindyanna. Many of us are familiar with Dr. Bronner’s soaps, but did you know that Sindyanna of the Galilee’s organic olive oil is an essential ingredient in Dr. Bronner’s Magic Pure-Castile Soaps? KKL-JNF is also involved with Sindyanna of the Galilee – in KKL-JNF’s Birya Forest, the organic olive grove was once part of the now-defunct Qabba’a village. Not too long ago, another organic grove in Wadi Ara (planted on a former Israeli army firing range) was threatened by the construction of high-tension wires; following the protests of local farmers and the village council, the course of the power line was diverted.