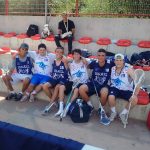 Tal Brody, left, with Richard Poritz at the Vancouver screening of On the Map. (photo by Kyle Berger)

It was a warm Israeli summer in 1965 when Tal Brody made the journey across the Atlantic to visit Israel for the first time. It was a trip that would not only change his life, but also the entire world of basketball in Israel.

Immediately after being drafted 12th overall by the Baltimore Bullets of the National Basketball Association (NBA) – or 13th, depending on how you saw it, according to Brody – he represented the United States at the Maccabiah Games that summer, leading them to a gold medal victory. He also fell in love with Israel.

He returned home with an offer to play in Israel for a year with Maccabi Tel Aviv, Israel’s represented team in the European Championship League. What followed was what many have called the birth of basketball in Israel, highlighted by Brody’s now-famous “We are on the map” quote – the inspiration behind the new documentary On the Map, the Vancouver première of which Brody attended at the end of November.

“Maccabi Tel Aviv was a team that never went past the first round of the European Basketball Championships,” Brody explained of the time before he visited Israel. “They asked me to take them to another level. They said that, by joining them, it would lift the spirits of the country and make them proud. This appealed to me as a young Jewish kid, so I decided to take a year out of my life. But I never imagined I would go to Israel for more than a year.”

That season, Maccabi Tel Aviv made it all the way to the European Cup Finals versus Italy. While they didn’t win it all, Brody saw firsthand the impact that basketball had on the spirit of Israel, as well as oppressed Jews around Europe.

“I saw what happened to the country because of basketball,” he said. “As well, as we played games in Eastern Europe, where Jews were suffering from antisemitism, I saw how proud they were when the team from Israel would come. The Jewish communities would gather around our team and, as the years went by, we became the team that had the most support wherever we went.”

Brody’s one-year plan turned into a lifetime, peaking in 1977 when Maccabi Tel Aviv won the European Cup Championship, defeating the heavily favored Russian Red Army squad. It was after that victory that Brody exclaimed, “We are on the map – and we are staying on the map! Not only in sports, but in everything!”

Today, Brody is one of the most recognized sports figures in Israeli history. Currently serving as a goodwill ambassador for the country, he was named the Israel Sportsman of the Year in 1967, was awarded the Israel Prize – Israel’s highest civilian honor – in 1979 and received a lifetime achievement award in the Knesset just last May.

“Every year I go back to the NBA all-star weekend and the guys always ask me the same thing: ‘Tal, why did you go to Israel?’” he shared. “I said, ‘Guys, even today, if I was offered 2.7 mill, if I knew what I would be missing, I wouldn’t take that money.’ I would never give up those 48 years in Israel. It’s been amazing.”

Since Brody’s influence, Maccabi Tel Aviv has remained a competitive team in the European Cup, winning it six times now. Israel has also seen two players play in the NBA, with Omri Kasspi currently playing for the Sacramento Kings and Gal Mekel playing for the Dallas Mavericks in 2013.

“To see and to take that journey from the rise of Maccabi Tel Aviv and now to see two Israeli players in the NBA and what it has done for the country is a good feeling,” Brody said. “It’s been such a great ride for me.”

Brody’s visit to Vancouver and the screening of On the Map were facilitated by the Jewish Community Centre of Greater Vancouver. The film will be officially released by Hey Jude Productions in 2016.