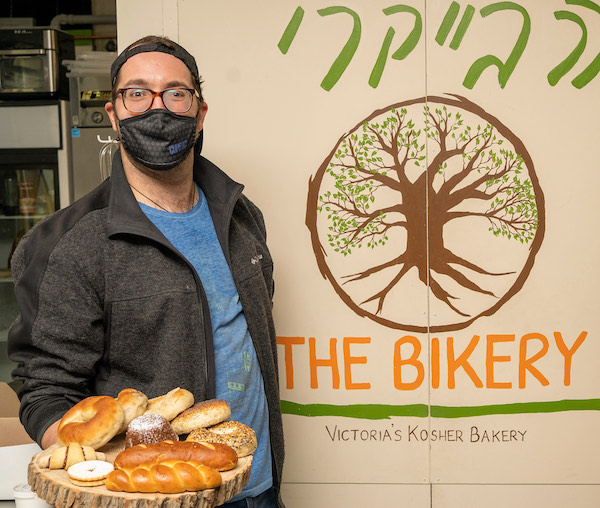 Markus Spodzieja, owner of the Bikery, the first and only certified kosher bakery on Vancouver Island. (photo from the Bikery)

Victoria’s Jewish community and area foodies received welcome news for their taste buds this summer. For the past four months, the Bikery, the first and only certified kosher bakery on Vancouver Island, has been operating at a permanent address, the Victoria Public Market, 1701 Douglas St. Until now, local households that wished to keep kosher would either bake their own breads or order from Vancouver.

As its name implies, the Bikery had, before moving to the market, been selling its goods from a bicycle – a 250-pound mobile vending bicycle to be precise – as part of a pilot project for the City of Victoria’s Mobile Bike Vending Permit. Started in 2017, the program gave local business owners the chance to operate a service via bicycle.

“I figured that the streets of Victoria could use more pretzels, so I rented out some kitchen space and built a box for the back of my bike, becoming a pedal-powered pretzel peddler,” Bikery owner Markus Spodzieja told the Jewish Independent.

In 2020, Spodzieja, along with his business partner Kimanda Jarzebiak, established a connection with Rabbi Meir Kaplan of Chabad of Vancouver Island. Though COVID-19 arrived on the scene shortly thereafter, the positive trajectory of the Bikery was not derailed.

“During the pandemic, as people became isolated at home, I pivoted my roadside-vendor business model to a delivery service and expanded my menu to include breads, buns and, most importantly and coincidentally, challah. After a few months of biking bread around the city, my now-business partner contacted me requesting weekly challah for her community’s Shabbat dinners,” Spodzieja said. “As the weekly orders began to grow, we arranged a meeting to discuss the need for a kosher bakery in Victoria, and spent the following nine months working out of Chabad of Vancouver Island perfecting our new menu.”

Since the Bikery’s pretzel beginning, the choices have expanded. Spodzieja’s selection now includes bagels of all sorts: poppyseed, cinnamon raisin, plain, and everything seasoning.

And there are still pretzels of all kinds on the menu, from the original “sweet and salty and chewy” to the chocolate drizzle pretzel “dedicated to the sweet tooth in all of us.” There is a roasted garlic and rosemary pretzel, each batch of which contains an entire head of garlic. As well, there is a cinnamon sugar pretzel, which, as the Bikery’s website asks, “Who needs a mini donut when you’ve got a pretzel with an ample dusting of sugar and locally processed cinnamon?” There is even the blending of two baked worlds – a pretzel bagel, which the Bikery touts as offering “the soft chewyness of the bagel combined with the salty flavour of the pretzel.”

The child of a German-Polish household, Spodzieja spent a lot of time in his youth in the kitchen. Both of his parents went to culinary school and his father ran a bakery in Campbell River.

“Little did I know that, growing up, baking would become a sort of unconscious habit. And while now I hold a BFA in acting, it gave me the life skills I needed to turn my baking hobby into something that better benefits my community,” he said.

For the time being, Spodzieja said, his focus is “working to establish ourselves into the Victoria Public Market, work on some new menu additions and [to] ensure the integrity of our products as we continue to grow. Rest assured, we have plenty of ideas coming down the pipe. We’ll just have to wait and see as they arrive.”

The Bikery is certified pareve kosher by BC Kosher Check and supervised by Chabad of Vancouver Island. Besides being kosher, most of the items sold at the Bikery are vegan as well.

The Bikery also strives to be environmentally friendly. Not only is its kitchen 100% electric powered, but all deliveries are made by a combination of bicycle and EV car. Its minimum fee for delivery is $10. Deliveries usually cover a radius of five kilometres, but it has temporarily expanded to 15 kilometres.

Victoria’s Public Market is situated close to City Hall and Centennial Square and is a few blocks away from the Empress Hotel and the Parliament Buildings. It is housed in a building that operated for several decades as a Hudson’s Bay department store. Located toward the back entrance (near free two-hour parking), the Bikery shares the market with, among others, a high-end chocolatier, a vegan butcher shop and an exclusive kitchenware store.

For more information or to place an order, visit thebikery.ca.