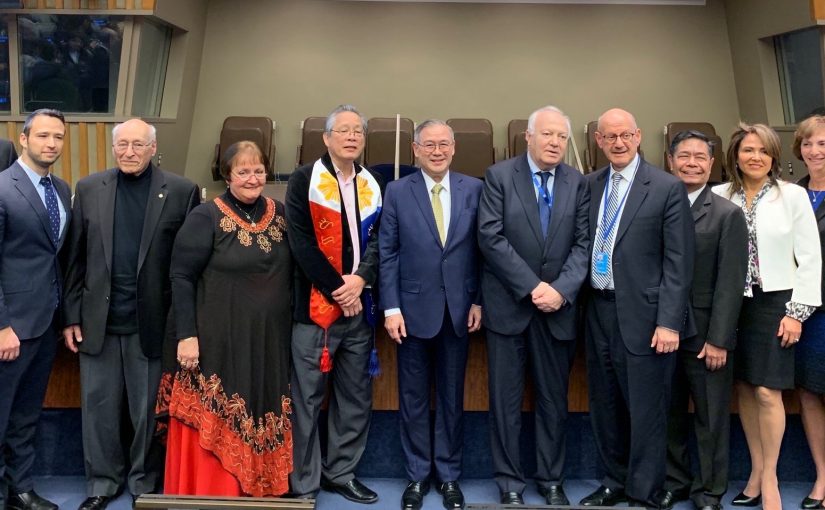 On Holocaust Remembrance Day, Jan. 27, B’nai Brith International (BBI) honoured a former Philippine leader at the United Nations building in New York, for having saved Jews during the Holocaust.

At a time when the Philippines was still under American sovereignty, the appointed Philippine president, Manuel L. Quezon, invited and welcomed 1,300 refugee Jews who were fleeing Nazi persecution.

Quezon, who was born in 1878 and died in 1944, was a statesman, soldier and politician. He served as president of the Commonwealth of the Philippines from 1935 to 1944.

According to Philippine Secretary of Foreign Affairs Teodoro Locsin, the reason why Quezon chose to help when many other world leaders refused to do so, is that he acted in the tradition of “Do unto others as you would have done unto you.”

Not only did Quezon welcome as many Jews as he could get visas for, he also offered them his private land to grow food and develop a kibbutz.

“I think it’s a case of, there are individuals who, I’m a firm believer in this, whose moment comes at the most opportune time,” said Daniel S. Mariaschin, BBI chief executive officer. “In the case of Manuel Quezon, I think he was a good-hearted individual. There was nothing in this for him.

“He really was a compassionate person who heard this story, thousands and thousands of miles away, and was moved to act. And now we are finding out, as more becomes known, that he was willing to save many, many more … and was, unfortunately, not able to do so. I think he stands very high … as one of the Righteous Among the Nations, who acted to save Jews.”

At that time, from 1937 to 1941, as news reports were revealing Hitler’s plans, Quezon secured the necessary visas from the American visa office for a Jewish-American family by the name of Frieder, who manufactured cigars in Manila.

“I think the family, together with the president, were able to get word out, they were able to get those visas … although, again, unfortunately, when he wanted to save more, the ability to get more visas was just not available to him,” said Mariaschin.

Years later, the Philippines was the only Asian nation to vote for the Partition Plan in 1947, to form the state of Israel in 1948, which continued to pave the way for the positive relations Israel has with the Philippines to this day. In 2009, in Rishon Lezion, a monument was erected to honour Quezon.

The BBI event in January was well-attended and included remarks from Locsin, Mariaschin, historian Bonnie Harris, and Hank Hendrickson, who is the executive director of the U.S.-Philippines Society and a refugee who was personally saved by Quezon.

In between the various speakers, director Noel (Sunny) Izon, who made the documentary about Quezon called An Open Door: Holocaust Haven in the Philippines, shared a clip from the film. According to Izon, some 11,000 descendants of the refugees Quezon saved owe their life to him and Izon is one of them. He explained that one of the refugees Quezon saved was a doctor who saved his father’s life soon after arriving in Manila.

Another highlight of the January event was having refugee Ralph Preiss present. Preiss had been saved by Quezon, and shared his experience with attendees.

While no one from Quezon’s immediate family attended, nearly half the attendees were of Filipino descent who now live in New York.

“The books, the films, the documentaries and the stories will live on from this point, forever,” said Mariaschin about other recent recognitions of Quezon’s actions. “That’s the best tribute you can have, that, rather than have this be just considered a footnote of history, it’s now becoming an important piece of the story … of the courageousness, the humanitarian impulses, of a relatively few individuals.”

According to Mariaschin, Quezon is on equal standing with the handful of other leaders who had a hand in saving Jews during the Second World War, and he said we need to continue highlighting their stories before we lose our few remaining survivors.

“I think we have to do this while there are still survivors who are living,” said Mariaschin. “Unfortunately, the clock is running down on that. In the lifetimes of those people who they saved, it’s extremely important that we say thank you.

“And we were fortunate, as I said, to have one refugee at our program, to have them say thank you and to talk about their story. It’s something that really we need to do every year now and in between, in order to memorialize those who saved Jews.”

Five years ago, the International Raoul Wallenberg Foundation posthumously bestowed Quezon with the Wallenberg Medal, which also acknowledged the Philippines as a whole for having saved Jews during the Holocaust. In Winnipeg, the local B’nai Brith branch is working to organize an event, together with the Winnipeg Filipino community, to honour the former president.

To view the video of the BBI event in New York, visit webtv.un.org and do a search for “Safe Haven: Jewish Refugees in the Philippines – Panel Discussion.”