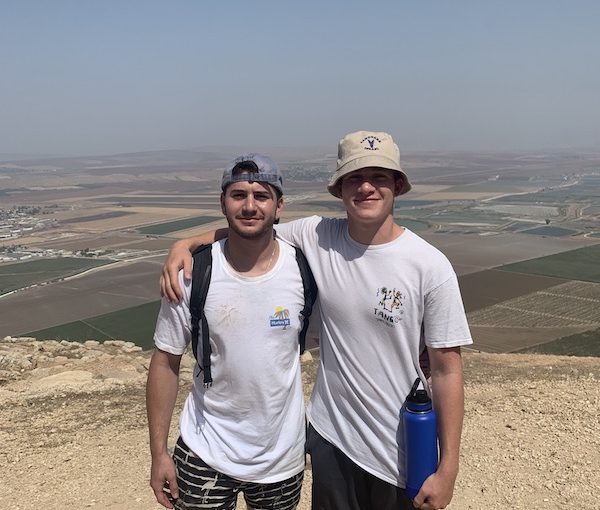 “When my siblings came back from their year abroad and couldn’t stop raving about it, I couldn’t help but experience it myself. When the day came and the program started, I was anxious, as expected, but mostly excited,” said Eitan Nurick, 18, who went to King David High School.

Nurick was referring to Aardvark Israel, which offers four-to-10-month gap-year programs in Jerusalem and Tel Aviv, specializing in internships; volunteering, partnered with Masa Israel Journey and Israel Volunteering Association; and technology, partnered with the Developers Institute.

“The biggest learning curve was definitely figuring out how to live with four complete strangers,” said Nurick, from Tel Aviv. “I learned that the most important thing to do was to communicate and let your roommates know what you need, eventually coming to a decision that works for everyone.

“Something that I have been especially loving is my internship,” he said. “I work at Inklude, a tattoo studio…. While running the social media, and overall helping out around the studio, I have also been given the opportunity to learn how to tattoo, which ties in perfectly with my love for art. I really feel like I have been welcomed into the workplace and have made meaningful connections with my co-workers. So far, my experience in Israel and with Aardvark Israel has been amazing. I have been able to strengthen my bond with my religion and culture, as well as learn lifelong skills that will stick with me forever.”

Toronto student Lisa Fireman, 18, who attended TanenbaumCHAT high school, also is benefiting from her internship, which is at Eden Gallery in Tel Aviv. She described it as her favourite part of Aardvark.

“I am currently helping plan four events for Art Basel in Miami,” she said. “This has been the experience of a lifetime for me. I love my boss here and feel as if I am being trusted and treated as a real member of the Eden Gallery team. As someone going into art history in university, this could not be a more ideal internship. I love spending my days at the gallery, knowing that this experience will help me in my future path.”

She admitted, “It can be stressful living alone, but I wouldn’t want to do it in any other way. I have gained so much independence, friends I love with my whole heart, and a job that makes me feel so fulfilled.”

Fireman is preparing for her spring semester in Jerusalem.

“A lot of the gap year promotional testimonies write as if gap year is all peaches and sunshine,” she said. “While they aren’t wrong about how much fun it can be, being on Aardvark is so much more than that. My gap year story started last October, when my best friends were considering gap year programs. Out of a fear of going into college without them, I started looking into Aardvark Israel…. I fell so hard for the program that, even when all of my friends eventually decided against gap year, I still committed to spending time on Aardvark. So I went. Absolutely alone. And it was as terrifying as it sounds.”

Fireman had anxiety surrounding making new friends, but put herself out there anyway.

“I did this by asking people to be my ‘bus buddy’ on Tiyul Tuesdays, going to Wednesday night programming, and hosting Shabbat dinners,” she said. “I started to realize that everyone on Aardvark is just as alone as I was. We all had come from around the world and had to create our inner circle … so everyone was open and actively putting themselves into new social situations.”

For more on Aardvark’s gap-year programs, go to aardvarkisrael.com.