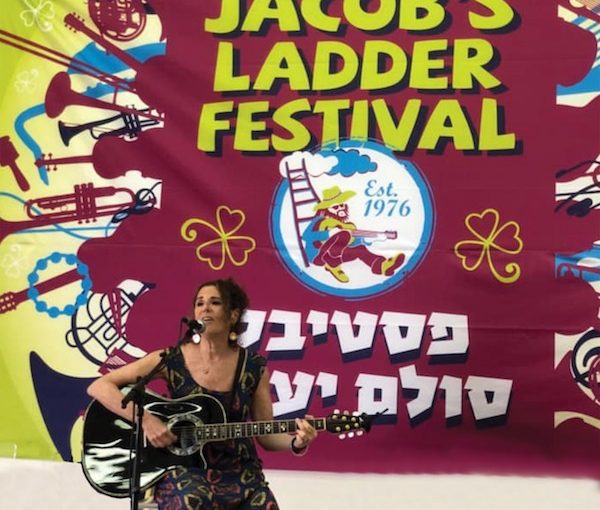 The author enjoying a day of folk music from around the world at Israel’s Jacob’s Ladder festival. (photo from Miri Garaway)

I have always been a folk music aficionado, so when I heard about the Jacob’s Ladder Music Festival in Israel, I planned a trip there entirely around the idea of attending the festival. Not only was it a phenomenal event, it exceeded all my expectations and was the highlight of our month’s stay.

Established in 1976, Jacob’s Ladder (Sulam Ya’akov) is held twice a year, in May and December, with the spring festival on a larger scale. It is billed as “Israel’s friendliest musical and social event, a unique bluegrass, folk, country, blues, Irish and world music extravaganza.” That it was.

With the venue on the grounds of Kibbutz Nof Ginosar on Lake Kinneret, nine kilometres north of Tiberias, the setting could not be more beautiful and the atmosphere is very relaxed, “green” and peaceful. Approximately 4,000 people attend the spring festival, yet it did not feel crowded or overwhelming.

How wonderful to be able to attend a two-and-a-half-day event and know that there is free camping on site, in addition to the pleasant Hotel Nof Ginosar. From the moment we entered the site, on a Thursday afternoon in May 2014, we could feel the energy of the special event that was about to take place.

The organizers have registration down to a science. We bought our tickets upon arrival, received our fluorescent wristbands and joined the throngs of festival goers entering the site. Considering the volume of people arriving, we were amazed that we only had to wait a short time in the line-up for tickets. Pre-festival online tickets helped to ease any congestion.

And, perhaps only in Israel would they provide free agalot, large wheely carts in the parking lot so you can carry all your belongings into the grounds. I found this so civil and convenient and it was fun to watch the hordes of people streaming in with their tents, barbecues, bicycles, chairs, strollers, blankets, duffle bags, food coolers and other camping paraphernalia.

This is a festival that everyone can enjoy: young families, teenagers, baby boomers, aging hippies and young-at-heart seniors. While it originated as more of an anglophone festival, today, many non-anglophone Israelis and tourists attend, too.

We chose to stay at the kibbutz guesthouse, Hotel Nof Ginosar. Although the hotel is fully booked for the festival from year to year, the reservations clerk suggested we put our names on the waitlist (this was in October) with a good chance that a room would become available closer to the date of the festival. In the interim, we booked a nearby bed and breakfast to ensure that we had some accommodation in place. We were fortunate that space at the hotel did open up a couple of months before the festival.

It was convenient to stay on site rather than commuting. The hotel is basic, but clean and comfortable and every room has a fridge. The bountiful and delicious Israeli breakfast, included in the room rate, gave us a great start to the day.

While exploring the grounds, I met my Israeli cousin from a nearby moshav, who promptly invited us to his tent for a communal Shabbat dinner. Suddenly, we were among family and friends for a feast. This unexpected rendezvous was indeed a treat.

Jacob’s Ladder is easy to navigate. The main stage is a huge expanse of grass where you can put down blankets, towels or low chairs to reserve a spot for the entire weekend. This is unheard of at most festivals, since you usually have to collect your things at the end of the day and race for the coveted spots each day. It is an unspoken rule at Jacob’s Ladder that if you are not using your space, anyone can sit in your place until you return. The whole area is covered by an enormous see-through tarp, so the sun does not beat directly down on you. Once you are settled in, it is pure joy to sit back, relax and enjoy the outstanding talent and the incredible music. On many occasions, people are moved to get up and dance. You also get to know your neighbors and it feels like a community within a community. It is interesting to make connections with the people who are around you.

There is also the lawn stage, a smaller space with chairs set up on the plaza outside the hotel lobby. Another music venue within the hotel is Hermon Hall, an indoor auditorium, as well as the balcony stage and the sports hall for music and dance workshops.

The performers are often available to meet right after the concert, at a table beside the stage, where they sell their merchandise.

In addition to Israeli artists, musicians come from all over the world to perform at the Jacob’s Ladder. A sampling of some of the stand-outs for 2014 included the Jammin Divas; Maya Johanna, Shay Tochner and Yonatan Miller in a tribute to Pete Seeger; the Slocan Ramblers; and a variety of singers who belted out a moving medley of the songs of Janis Joplin, Joni Mitchell, Eric Clapton and Ray Charles. From the strumming of the Ukeleles for Peace Children’s Orchestra to the lilting sounds of Nava Tehila singing Jewish world music for Kabbalat Shabbat, this was a festival that moved and energized me.

The hotel kindly allows jamming sessions in the lobby and bar areas and people bring guitars, banjos, violins, flutes, clarinets, harmonicas, drums and an assortment of other instruments to showcase their talent. What a wonderful hive of activity and a delight to hear music wafting throughout the hotel. There are also pop-up jamming sessions on the grounds, away from the stages. People-watching is an activity unto itself.

If you want to take a break, there is a swimming pool, as well as the lake beach of the Kinneret, but we came for the music and it was truly an exceptional experience.