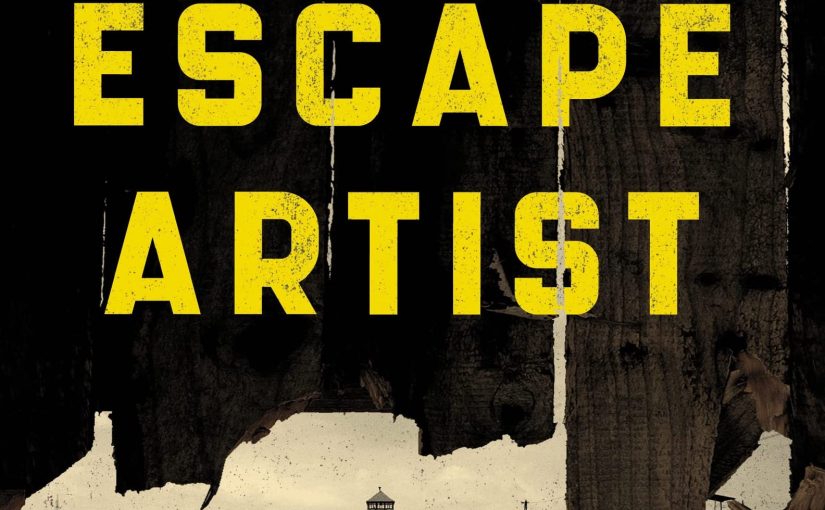 Anyone who knows more than a little bit about Holocaust hero Rudolf Vrba – a Vancouverite for 31 years – will approach Jonathan Freedland’s The Escape Artist: The Man Who Broke Out of Auschwitz to Warn the World (London, UK: John Murray, 2022) with delight and apprehension.

Will this Guardian journalist and thriller writer take the high road, encouraging everyone to seek out Vrba’s own fascinating, still-in-print memoir? Or will he be more like Elvis swinging his hips, simulating Black-style music, because, hey, most people won’t know the difference?

Rudolf Vrba’s name is nowhere to be found on the cover. At the top of the jacket is the subtitle. At the bottom, Freedland’s name. The main title, front and centre, implies 19-year-old Vrba was Houdini-like but, as Freedland well knows, Vrba and his co-escapee Alfred Wetzler took advantage of an escape plan and a hideout conceived and built by others.

The pair’s report on Auschwitz was by far Vrba’s greater achievement – exposing the vast scale of murder at Auschwitz to the world-at-large, convincing everyone who read it. The pair is now credited with saving 200,000 lives.

As someone who knew Vrba, I am sympathetic to Freedland’s undertaking. How do we get more people, including academics and even Jewish community members, to celebrate one of the greatest heroes of the 20th century?

Thankfully, The Escape Artist is clear and precise storytelling. With access to Vrba’s archival materials in New York’s Franklin Delano Roosevelt Library and input from both of Vrba’s wives, Freedland has also been able to add a good deal of fresh information to the public record.

It will be enlightening for most readers to learn that four other men actually planned and built Vrba’s getaway hideout (where Vrba and his cohort Wetzler hid for three days). This seldom-cited quartet tested it for real, escaping for several days before being caught and tortured, but not killed.

Vrba’s own narrative – first entitled I Cannot Forgive and later changed to I Escaped From Auschwitz – omitted crediting the extreme courage of these men. Without them, Vrba would never have reached Slovakia and co-written the Vrba-Wetzler Report, intended to forewarn 800,000 Jews of Hungary not to get on those trains. From Freedland, not from Vrba, we also learn how one of the tortured members of that quartet was able to assure Vrba that he and his escapees had not divulged their undiscovered hideout in the “Mexico” section of the camp.

“Mexico” was so-named, Freedland tells us, because poor souls marooned in the construction zone with makeshift shelters were not given clothes; consequently, naked prisoners had to drape themselves in blankets and other prisoners at Auschwitz-Birkenau thought they looked like New Mexico Indians.

Vrba did make clear, however, that in order to travel over land through hostile territory for a grueling 14 days, he and Wetzler had followed explicit directives that Vrba had received from a Russian prisoner named Dimitri Volkov. Hence, it was Volkov who was the master of escapology; Vrba was his disciple. 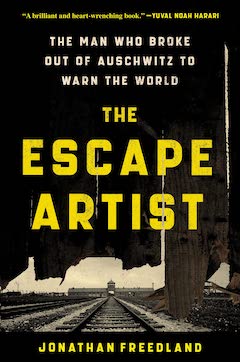 For virtually all of the people on the planet who have not sought out the two volumes of fascinating, self-published memoirs by Vrba’s first wife, Gerta, The Escape Artist will be welcomed for divulging details of Vrba’s first marriage. Gerta had to take her leave, penniless, with their two daughters, to escape from a philandering and distrustful husband who was clearly still in recovery after almost two years in Auschwitz.

The extent to which both his daughters felt estranged from him is touched upon. We also learn more about his eldest daughter Helena’s apparent suicide in Papua New Guinea in 1982 (an overdose of chloroquine in response to her love affair with a married man who left her) after she had all but severed ties with her father three years earlier.

Gerta’s books have already revealed that Vrba, as a youth, emerged as a leader in a self-teaching circle of friends and that, when Gerta was 13, she was enraptured by his precocious intelligence and confidence. Vrba was 15 and sometimes dismissed her as childish.

Gerta Vrbova and Vrba’s second wife, former Vancouver realtor Robin Vrba, were invaluable informants for Freedland but we have no idea who told him what. Their contributions to history are invisiblized, not unlike what could have happened to Vrba and Wetzler, who were advised by Jewish elders in their native Slovakia not to have their names attached to their momentous reportage.

One error must be cited: on page 8, Freedland states that Vrba and Wetzler were “the first Jews to break out of Auschwitz.” Freedland later devotes three pages to Siegfried Lederer’s marvelous escape on April 5, 1944, when Lederer [tattoo # 170521] outwitted Nazi guards by donning an SS uniform provided by SS officer Viktor Pestek.

Google will tell you that Siegfried Lederer, aka Vítězslav Lederer (March 6, 1904-April 5, 1972), was born to a Jewish family in Písařova Vesce in the Sudetenland. Czech sites convey he was a Resistance fighter who was transported from the Terezín Ghetto to Auschwitz-Birkenau (arrival on Dece. 18, 1943). He was forced to wear both yellow and red triangles, marking him as a Jew and as a political prisoner. After he escaped, he warned Judenrat elders at Theresienstadt about the mass murder of Jews at Auschwitz – but he was both disbelieved and told to remain quiet.

If Freedland has some contradictory information to prove that Lederer is not Jewish, he might well have provided it. Certainly, for marketing purposes, it sounds better to imply Vrba and Wetzler were first. Sure enough, an uncredited review now permanently appears on the Guardian/Observer website and it baldly asserts: it took until 10 April, 1944, but eventually Vrba and fellow prisoner Alfred Wetzler “achieved what no Jew had ever done before: they had broken out of Auschwitz.”

One has to wonder who wrote that uncredited summary. On page 171 of his book, Freedland slyly covers himself by saying, “Fred Wetzler and Walter Rosenberg [Vrba’s birth name] were on their way to becoming ‘the first Jews to engineer their own escape from Auschwitz.’” Trouble is, he has already told us that four prisoners – named Citrinm, Eisenbach, Gotzel and Balaban – ought to be chiefly credited for building (ie. engineering) the hideout, not Vrba and Wetzler.

We like to assume people who write for the Guardian must have higher standards, but, hmm, maybe not. Now people all over the world can watch Freedland’s June 18th promotional video on YouTube in which he self-assuredly states, “I know, since I’ve nailed this down, that only four Jews ever escaped from Auschwitz, and Vrba and Wetzler were the first.” Either this is a lie or research standards at the Guardian have drastically plummeted.

Overall, The Escape Artist is an intelligent, valuable and easy-to-read account by someone who is bright enough to know that a warts-’n’-all portrayal of Vrba’s life is the best possible way to get the world interested.

If Freedland treads lightly when it comes to defending Vrba and foremost Vrba expert Ruth Linn in their battle with Yad Vashem historian Yehuda Bauer, well, perhaps he can be excused for wanting as many readers as possible in Israel. Robert Krell, as the founding force behind the Vancouver Holocaust Education Centre, was interviewed but he appears on only one page. Two other Vancouverites, Dr. Joseph Ragaz and Prof. Chris Friedrichs, were interviewed by Freedland, but their input is not cited except in an acknowledgements section. Linn, an Israeli academic and a part-time Vancouverite, who was for eight years the only scholar that Vrba permitted to interview him, declined to be interviewed. Linn and Freedland both first became aware of Vrba’s existence by watching Claude Lanzmann’s nine-and-a-half-hour documentary Shoah.

I greatly appreciate the effort it took to fashion a potential bestseller for a new generation that knows increasingly less about the Holocaust. I am certain Vrba’s co-author Alan Bestic, who overcame different obstacles for his time, would likewise approve. Unfortunately, the bibliography omits any mention of Bestic’s co-writing of the memoir I Cannot Forgive and it’s only mentioned once in the text, on page 272. For that matter, Vrba’s own book, with its current title, is cited precisely once in small print within the depths of a seven-page bibliography. (There it is, on page 358, included alongside a scientific paper Vrba published about his research on rat brains.)

London-based Bestic was a fantastic writer. Freedland is a very fine one, too. He can turn a phrase. He can step back and be invisible. He has poise and tact. It is unfortunate, therefore, that Bestic’s essential role as Vrba’s co-writer has been ignored and even somewhat denigrated (“a supremely skilled Fleet Street journalist of the old school”). We don’t learn anything about him. If Freedland has the means to undertake research in New York and Vancouver, why is there no apparent digging to tell us anything about the man who wrote most of the text upon which The Escape Artist itself is necessarily based?

As a writer, Freedland has a very cool, even calculating hand. That’s good for journalism; it might even be good for thriller writing. But the drama of Vrba’s story has been subdued in this modern version. The Escape Artist is nonetheless an essential and welcome work, if it gets the world aware of one of the greatest whistleblowers of the 20th century. Ideally, the book will lead more people to seek out the latest version of Vrba’s own narrative, I Escaped From Auschwitz: The Shocking True Story of the World War II Hero Who Escaped the Nazis and Helped Save Over 200,000 Jews, released in 2020, co-edited by Nikola Zimring and Robin Vrba, minus its original opening chapter.

Alan Twigg’s 20th book is Out of Hiding: Holocaust Literature of British Columbia (Ronsdale Press, 2022). This year, he received an honorary doctorate from Simon Fraser University.