Dr. Shoshana Levin Fox’s An Autism Casebook for Parents and Practitioners: The Child Behind the Symptomswill hold you spellbound. Section I is titled “Children.” These first eight chapters are the stories of Jack, Sasha, Annie and others (all the children’s names used are pseudonyms) – children who came into the Feuerstein Institute after having been diagnosed as autistic. They exited with new hope, not only for themselves, but for their parents, who needed their own emotional propping up.

Levin Fox is a psychologist and play therapist who has worked with children for more than 30 years. In addition to lecturing and giving workshops in North America, Israel and Europe, she worked for 25 years in the Feuerstein Institute of Jerusalem, founded by the late Sorbonne-educated Prof. Reuven Feuerstein.

Levin Fox lived for nearly 20 years in Canada. She completed a master’s at Simon Fraser University and a doctorate in counseling psychology at the University of British Columbia. She worked for many years as a counselor in the Special Services to Children and Families program of the Association of Neighbourhood Houses of British Columbia. Levin Fox was awarded a Social Sciences and Humanities Research Council of Canada post-doctoral fellowship, which enabled her to do research and practical work in the field of autism at the Feuerstein Institute. Coincidentally, for many years, Hadassah-WIZO Canada were prime funders of the institute’s programs related to autism. 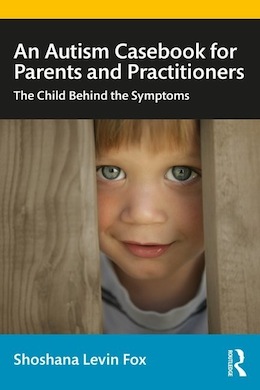 I recommend the book, not just for the moving stories of the children who were saved from what proved to be inaccurate assessments, and not only for the intriguing descriptions of the practices of the Feuerstein Institute, which Levin Fox combined with the DIRFloortime method. This book should be read for its critical message to parents who have received an autism diagnosis – or one of learning disabilities, ADHD, or other emotional, cognitive or developmental challenges – for their son or daughter: Believe in your child. Talk to your child. Keep looking till you find her the best and most appropriate help and hope. Don’t let the “experts” get you down, because a true expert will find the formula to lift you – and your child – up.

The idea of plasticity of the brain, writes Levin Fox, entered mainstream medicine several generations after Feuerstein had intuited and created materials and methods based on that reality. Levin Fox decries the fact that “the diagnosis of autism is used as a sacrosanct truism…. I have found that the term ‘autism,’ as it appears commonly in the field, in actuality is being used to describe children who suffer from a vast range of communication difficulties, from extreme shyness to psychotic conditions and just about everything in between.”

The children whose stories are recounted in this book all made significant progress. Levin Fox writes, “Not every child began to speak fluently, to learn at a normative level and to play happily with friends…. However, it can be safely and honestly stated that, inspired and mentored by the professor, my colleagues and I made a huge difference in the lives of hundreds of children originally thought to be autistic.” She sees them, as a team, as having saved many lives.

Feuerstein sought to find a child’s latent strengths, and what he called “islets of normalcy.” Levin Fox explains that “islets of normalcy” include, among other elements, eye contact, human relationships, symbolic play, curiosity, humour and more.” She emphasizes that helping parents understand their children’s challenges, and not to be fearful and depressed about them, is part of the battle.

In Part II, “Theoretical Groundings,” Levin Fox gives the intense and thorough theoretical background to the success stories, which are plentiful. Six more case studies are interwoven in the text to help bring the theory alive.

This section also describes the roots of Feuerstein’s methods. He began by working with orphan children who had been traumatized after the Second World War, decided there were flaws in the standard diagnostic tests and, rather than focusing on performance, he focused on the child’s ability to develop learning processes.

“Current studies on brain plasticity … scientifically substantiates what [Feuerstein] proposed two generations ago – that brain cells are modifiable and respond to the stimuli of the environment,” writes Levin Fox.

One of my favourite stories is in Chapter 15, where Levin Fox talks about Ben, whom she first met when he was 5 years old. The end of the chapter, with the sub-heading, “Ben’s Epilogue,” describes a chance meeting between Levin Fox and Ben’s parents, many years later, at an airport. “Dr. Shoshana!” they called out, and his mother pulled out her cellphone. “The happy faces of Ben and his wife, holding their newborn son, smiled back at me,” writes Levin Fox. “For Ben, the paradigm-shift had indeed been life-saving.”

I found other words to describe the journeys and miracles of the children portrayed in this book: life-affirming.

Toby Klein Greenwald is an award-winning journalist, educational theatre director, teacher and the editor-in-chief of wholefamily.com. A longer version of this article appears at jewishlink.news/features/47241-the-child-behind-the-diagnosis and elsewhere online.