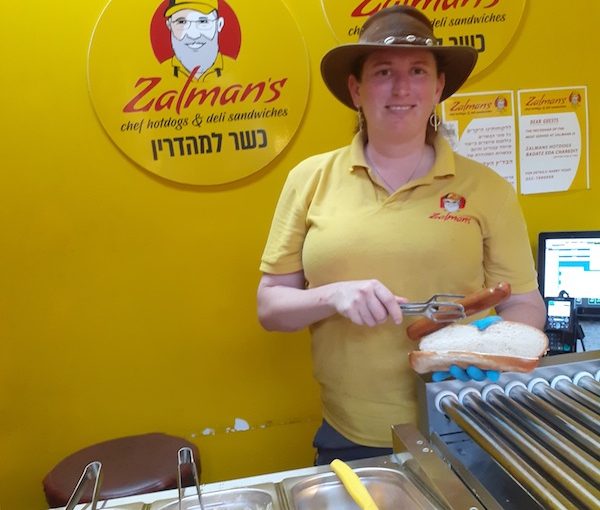 Unemployed tour guide Hannah Rosenberg is now serving up hot dogs for about $12.50 Cdn an hour. (photo by Gil Zohar)

For Anglo tour guides who have been unemployed since March 2020, the Israeli government’s recent decision to impose a seven-day quarantine requirement for visitors from the United States because of the coronavirus – that resulted in the cancellation at the beginning of August of 42 10-day Birthright trips – was another blow to a hard-hit industry.

Compounding the gloom caused by the week-long isolation order are two other decisions. The U.S. Centres for Disease Control recently warned against travel to Israel due to the rise in cases of the coronavirus as the Jewish state experiences another wave of COVID-19 infections and death. And, at the end of June, Bituach Leumi (Israel’s social service agency) ended payments to unemployed guides under the age of 60.

Hannah Rosenberg, 30, who completed a two-year certification course at the Hebrew University, leading to a series of Ministry of Tourism licensing exams in February 2020, is currently grilling hot dogs at Zalman’s in downtown Jerusalem for NIS 32 (about $12.50 Cdn) an hour. She remembers how the good times suddenly ended.

“March 18 (2020) was my last tour,” she recalled. She was two days into a seven-day tour with an American family visiting Jerusalem and the Galilee when a phone call from the U.S. State Department cautioned the family to leave immediately, lest they get stuck without a flight out. “It was a lie,” said Rosenberg, a native of Jupiter, Fla., the first of many she has heard from government officials.

“I applied to Bituach Leumi,” she said, “and was denied because I had not been working for the previous six months, during which I was studying for the tour guide exam.”

An ever-resourceful veteran of an Israel Defence Forces combat intelligence unit, Rosenberg kept applying and, after nearly a year, was given NIS 1,200 ($475 Cdn) monthly beginning in February. That payment ended in June.

“My parents are helping,” she said. “It’s the first time since I was a kid. It’s a hard thing to ask.”

Notwithstanding the hardship, Rosenberg has no plans to leave Israel. “I’m here for good,” she said, sharing that she still plans to pursue her dream to become an archeologist.

Mark Sugarman, 68, who made aliyah from Boston in 1971 and became a licensed guide in 1992, has had a relatively easier time. He’s simply become retired – but not by choice. His last tour was in March 2020, he said.

“We finished the tour, the typical 10-day Christian pilgrimage tour of the holy places. It was grueling. It was like being in the army and doing miluim (reserve duty). I was exhausted…. I went into a voluntary two-week quarantine. I didn’t know if I was infected and I didn’t want to infect anyone close to me…. By the time I came out of quarantine, we were in the first lockdown. I was stuck at home with my wife and dog in Talpiot. I was knackered,” he said, using a word he learned from his British clients.

“I applied for everything. A month later, I turned 67, so I officially reached the age of retirement and I got Bituach Leumi. I couldn’t get unemployment … because I took old-age pension, I wasn’t eligible. Whatever I get, I’m grateful.”

He added, “When I was working, I saved money. The last four years before COVID was a fat period. Now, it’s lean. I’ve been in the business for close to 30 years. I remember the Second Intifada, from 2000 to 2004, and that was a harder period than now. Everyone had to scramble at the time. I know how hard it is for my colleagues who have young families.”

Sugarman would like to go back to the United States for the unveiling of his mother’s headstone in November, but it’s problematic at this time.

“It’s been hard,” he said. “My mother’s funeral was on Zoom. Since the pandemic started, I [have] lost three family members and two friends. We were cut off from each other physically. People dying were isolated from their loved ones. Together with the loss of income, that’s been the hardest part.”

Daniel Gutman, 41, has worked as a tour guide since 2009. The Dallas, Tex., native remains philosophical about the situation. “I’ve had a little bit of work here and there, with some people visiting, family and seminaries and yeshivas, which needed two to four guides per capsule. That helped a little but, basically, I haven’t worked in the last 18 months.

Since Bituach Leumi stopped its payments at the end of June, Gutman said it has been challenging. “The government bailed us out for 18 months after they put me out of work. It was enough to survive. Now I’m back to March 2020, to square one, figuring out what I’m going to do. I’m dipping into my savings.”

On the positive said, he said, “Although I’ve taken a hit financially, I’ve had an 18-month sabbatical to be with my family.” But, he added, “I’m looking forward to getting back to showing people the country I love.”

Even during times of war and terrorism, tourists used to arrive, Gutman said. But not now. “Is there [national] value in tourism?” he asked. “If so, the government needs to support tour guides. Money has gone to bail out tour operators and hotels.”

Gutman loves his career and said he has no plans to retrain. “I am optimistic this will end.”

Chicago-born Ami Braun, 43, another veteran guide, also has scrambled to survive since benefits ended in June. He recently sent an email promoting online sales of the Four Species (etrog, palm, myrtle and willow) for the upcoming holiday of Sukkot. And he has conducted some virtual tours for the Beit Avi Chai community centre. “I have been a licensed guide for 14 years. This is my passion. I am doing whatever I can to stay afloat,” he said.

Braun has returned to guiding part-time at the Kotel Tunnels. “The pay is like a student job,” he noted. “It’s not something to live off of.”

In addition to being a writer, I’ve been a licensed guide for more than a decade. For the longest time after March 2020, I dreamed, every night, about guiding. It was a great adventure showing tourists my country, the West Bank, Jordan and Egypt, and I touched the hearts of a lot of people who fell in love with Israel. But those days are gone. I’ve been able to devote my time to editing a book about Hebron’s Jewish community, and to researching a study about Nazi collaborator Hajj Amin al-Husseini, the grand mufti of Jerusalem, who spent the years 1941 to 1945 living in Berlin and aiding the Third Reich. I’ve had clients send me to Portugal and to Germany, but now travel has all but ended. Every summer since 2005 my wife and I have visited family in Canada. This year was the first time we haven’t gone. We’ve cut back on all expenses, including hosting Shabbat guests.

Still, I consider myself fortunate. I have my good health, interesting research, food in the fridge, and a wonderful wife and friends. Everything else doesn’t matter.