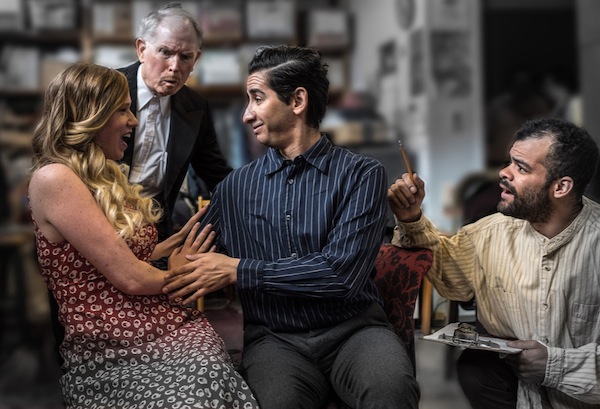 “The show has everything you could ask for: comedy, romance, great music and a great message at the heart of it, without taking itself too seriously,” actor Adam Olgui told the Independent about Theatre in the Raw’s latest production, Enter Laughing.

Enter Laughing opens May 9 at Studio 16. It is directed by Theatre in the Raw artistic director Jay Hamburger.

“It is time,” Hamburger told the Independent, “for this 25-year-old theatre company – that has toured parts of B.C., Alberta, Saskatchewan and Manitoba and resided primarily in Vancouver – to do a full-blown comedy: Enter Laughing by Joseph Stein of Fiddler on the Roof fame.

“We just finished producing the intense Incident at Vichy, dealing with the systematic arresting and putting away Jews for ‘processing’ in the occupied part of France during the Second World War, all part of the Holocaust,” explained Hamburger. (See jewishindependent.ca/miller-play-remains-relevant.) “The Stein two-act play is a positive challenge for an independent theatre company to spread its wings and take on a comedy with lots of fun, and universal and Jewish humour inherent in it. The characters are searching for love, relationships and something positive to do with their lives, and there are some wonderful, gentle yet funny, scenes that can melt the heart through very good acting, with the fine talent on board.”

Stein’s play is an adaptation of the 1958 semi-autobiographical novel Enter Laughing by actor, writer and comedian Carl Reiner, said Hamburger. “Reiner co-wrote and acted on Caesar’s Hour and Your Show of Shows, and formed the comedy duo with Mel Brooks for the 2,000-Year-Old Man. He has acted in numerous films, such as The Russians Are Coming, the Russians Are Coming. Reiner, at 97, is one of the oldest celebrities still active, and has been honoured countless times, including receiving the Mark Twain Prize for American Humour in 2000.”

“During the audition process,” he said, “I read for a few different roles including David, Marvin and the Foreman. Auditioning for Jay is always fun because he doesn’t limit himself to ‘traditional casting’ and he approaches the audition process with an open mind. And the same can be said for the rehearsal process as well. Jay is an extremely humble and gracious director and he lets his actors bring their ideas to the table, which isn’t always the case in this industry.”

Olgui described David as “a young guy who dreams of being an actor but he’s caught between the desire to make his parents happy, while also wanting to pursue his passion. David has an eye for the ladies, but he’s got a heart of gold. He’s a storyteller with a bad habit of telling tall tales, but he’s also honest to a fault. All of which makes for some interesting situations along his journey.”

There are several aspects of David’s character and story to which Olgui can relate.

“We’re both young Jewish men pursuing acting careers despite the sticky situations it gets us into. And, while most of David’s situations are stickier than my own, I’ve been in a number of situations that have required a fair bit of explaining and negotiating on my part,” said Olgui. “Like David, I can relate to the late nights, the Jewish mother, the tough family conversations, the proverbial Jewish guilt – all this, and much more, firsthand. But, as wild as the situations sometimes get, at the heart of it, David’s story is that of a young man chasing after his dreams, and I think that’s something anyone and everyone can relate to.”

As a young actor, though, Olgui admitted that he wasn’t that familiar with Reiner’s work before taking on the role in Enter Laughing. “I had seen a few hilarious Sid Caesar skits…. But, being in this play and researching the man behind the character has really given me the opportunity to discover more of Carl Reiner’s works and the comedy legend that he truly is.”

Reiner was an associate of Stein, Brooks, Caesar, Dick Van Dyke and other well-known creative sorts out of New York and Hollywood, said Hamburger. “This play in particular was originally written in the early ’60s and then revised in the mid-’80s and I think it’s a good show to do at the moment,” he said. “It’s our first large comedy production in a long time and, at times, audiences need to laugh and have a bit of comic uplift.”

Hamburger added that Enter Laughing has special meaning for him, as “it was the first professional piece of theatre I did (as an apprentice) way back in the 1960s with the Cleveland Playhouse at their yearly Chautauqua, N.Y., festival. What a wild and crazy and fun play to break into the art performance form as an apprentice.”

As to its continued relevance for today’s audiences, Hamburger said, “With the play Enter Laughing, we get a chance to see a young man in the late 1930s of low income starting to follow a dream he has of becoming an actor. He has an inspiration that he wants to be an actor, though has little to no idea of what even being in a play entails. There are a number of trial and errors that he goes through on his journey to get on the stage with a role in hand, as well wanting to hold onto a girlfriend who has helped him reach beyond his low-income neighbourhood.

“Surely, in 2019, there is many a young person looking for a career or working on a hunch of what truly interests them, and moving forward with what it is they really might want to do. Surely, in 2019, there are young and old peoples who go for their dreams, having little idea of what it all might entail, or how it all might work in terms of the craft or job they seek to do. Yet they take the plunge, learn and enjoy what the craft or business is about and find solace, enjoyment and purpose with that choice(s) in life.”

In sum, Hamburger said Enter Laughing “is a fine story that gives faith and courage to those with dreams, seeking to make their inspirations and likes come true.”

Enter Laughing previews May 8, and runs from May 9 to 19. For tickets, visit theatreintheraw.ca.