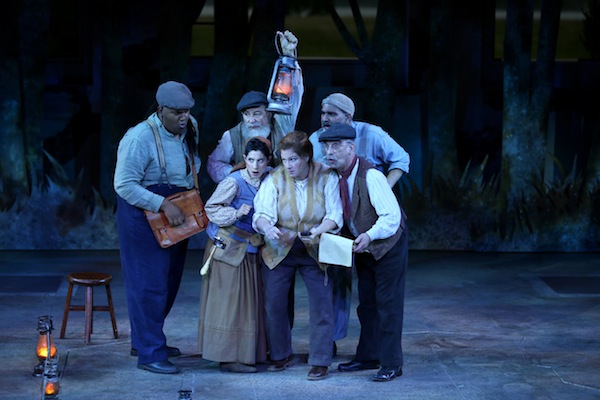 Bard on the Beach’s A Midsummer Night’s Dream is one cheeky dream. (photo by David Blue)

Summer in Vancouver brings the sun and, with it, things like beach time and bike rides, barbecues and picnics. It also brings the magic of Shakespeare’s Elizabethan world under the red-and-white tents of Bard on the Beach at Vanier Park.

This year marks the 25th anniversary of Bard. And, true to form, it serves up an interesting mix: re-mountings of two previous hits, A Midsummer Night’s Dream and The Tempest, under the big tent, with the lesser-known Cymbeline and the non-Shakespearean Equivocation on the newly minted Howard Family Stage at the Douglas Campbell Studio Theatre. This week, the JI reviews Dream and Cymbeline.

You can never really go wrong with presenting one of the Bard’s most beloved comedies and this year’s production of Dream is no exception, as director Dean Paul Gibson ramps up the frenzy to produce what can only be described as a very raunchy, in-your-face romp. This is one cheeky dream.

There are four story lines to follow: the wedding preparations of the duke of Athens to Hippolyta; the “looking for love” riotous journey through the fairy-studded woods of the four young star-crossed lovers; the feud of the fairy royals, Oberon and Tatiana; and, finally, the play within a play (Pyramus and Thisbe) presented by the local tradesmen in honor of the duke’s wedding and acted out under its own little red-and-white tent.

Kyle Rideout as Puck, the mischievous servant of Oberon, and Scott Bellis, as Bottom, the bucktoothed, red-nosed, nerdy know-it-all of the working class, stand out in the reprisal of their 2006 roles in this large ensemble cast. Naomi Wright breathes new life into the role of Tatiana while Ian Butcher is a very sexy Oberon. Chirag Naik, Daniel Doheny, Claire Hesselgrave and Sereana Malani beautifully play the young lovers Lysander, Demetrius, Hermia and Helena. It is refreshing to see these up-and-coming thespians make their mark on the Vancouver stage (watch them in the future!), but it is veterans Bernard Cuffling, Allan Morgan, Andrew McNee, Allan Zinyk, Haig Sutherland and Bellis (who does double duty as a lovesick ass – the animal, not the human kind) who are the hits of the show with their take on Pyramus and Thisbe. The prolonged death scene played by Sutherland and Bellis will have you in stitches, although there is a raised eyebrow moment thrown in for good measure – keep your eyes peeled.

The visuals make this production pop, from the set to the props to the costumes. Set designer Kevin McAllister has created his own dream with a large seashell-like shape framing the ocean and mountain vista that is Bard’s trademark. Umbrellas play a pivotal role in the opening scene with Tatiana’s oversized umbrella bed providing the focal point. Mara Gottler’s costumes are sartorial delights to behold, punk meets Goth meets Victorian era meets contemporary with a plethora of tutus, corsets, bustles, sheer skirts and some very interesting footwear. Then, there is the music by husband-wife sound design team Alessandro Juliani and Meg Roe, which hits the spot with the likes of “Why Do Fools Fall in Love,” “At Last My Love Has Come Along” and “I Put a Spell on You,” tunes synchronized perfectly with the action. Tara Cheyenne Friedenberg brings it all together with bespoke choreography for the doo-wapping fairy chorus.

Shakespeare wrote Cymbeline in his twilight years. It is an eclectic retrospective of his repertoire, including the allegedly unfaithful wife and villain in Othello, the sleeping potion from Romeo and Juliet, the murder plots from Hamlet and Macbeth, the heroine disguised as a boy of As You Like It, the bloody beheading in Titus Andronicus, the missing brothers of A Comedy of Errors, the list goes on. Perhaps Will thought putting these all together would be fun, but his creation is a jumbled goulash with a dizzying array of plotlines that have more twists and turns than any rollercoaster ride. This may well be why the play is so rarely produced. That being said, director Anita Rochon’s production – which she characterizes as a “tragedy gone right” – is very entertaining and hits the right balance between gravitas and farce.

Seven actors play 18 roles with all the costume changes taking place in view of the audience. Clad in beige fencing outfits, the actors signal character changes by the addition of colorful pieces to their neutral palettes – a red sash here, a green doublet or muffler there.

The story starts with the girl-meets-boy scenario. That is, royal girl (Imogen, played beautifully by the only female member of the cast, Rachel Cairns) meets plebian boy (Posthumous, played by Anton Lipovetsky) and secretly marries him. Father (King Cymbeline, played by Gerry Mackay) frowns on the relationship and banishes the boy. Meanwhile, his second wife, the wicked Queen (Shawn Macdonald) plots to have her son, the scheming Cloten (also played by Lipovetsky), marry Imogen and then poison both the girl and her father so that Cloten can become king. The speed picks up with the runaway bridegroom, a wager to test the fidelity of the chaste Imogen, disguises, a sleeping beauty, a battle, a beheading, mistaken identities and long-lost brothers. Without giving away the ending, the good news is that, measure for measure, in this production, despite much ado, all’s well that ends well.

Lipovetsky is definitely the stand out in this show as he juggles his three roles – the third being Arviragus, one of the brothers – seamlessly morphing from one character to the next. He even manages to have two of his characters on stage at the same time. Bob Frazer plays the snakelike seducer, Iachimo, who literally slithers out of a chest of drawers to do his dastardly deed. Anousha Alamian has a small but dialogue-heavy role as the long-suffering servant of Posthumous, and Benjamin Elliott also plays various smaller parts, including one of the brothers and he gets the juicy beheading bit, but his main role is as sound designer and composer of the original music played by various cast members on banjo, accordion, mandolin and drum.

Pam Johnson’s set is stark and sleek, with many pieces doing double and triple duty – a chest becomes a table, a bed, a desk. Locations are identified by flag standards, blue for England and red for Italy. Gottler’s austere costumes, in contrast to her fanciful creations in Dream, complement the simple setting, and Cheyenne Friedenberg and fight director Nicholas Harrison conspire to present some very fancy footwork.

The bottom line is that you can’t go wrong with any of Bard’s offerings for its silver anniversary year. See one or two or all, but see at least one. The festival runs to Sept. 20. For more information and tickets, visit bardonthebeach.org or call the box office at 604-739-0559.