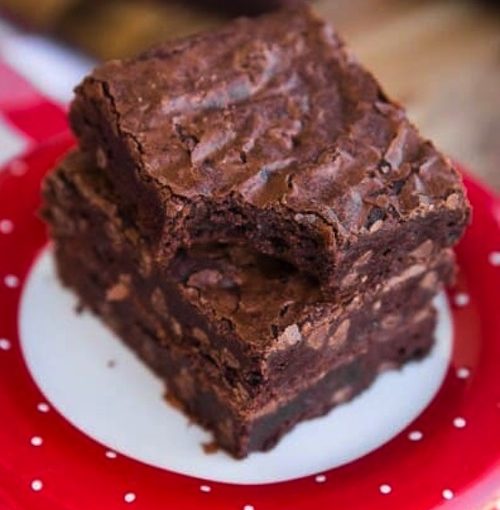 And just like that…. I found myself sitting in the living room, clandestinely stuffing a four-inch square of decadent cocoa brownie in my mouth.

It was as though I’d been in a trance, eating on autopilot. But then I snapped to

attention, hearing noises coming from the other room, alerting me to the presence of an intruder (or my husband snoring in the bedroom). I needed to get rid of the cocoa-y evidence, pronto, before I got caught brown-handed. After all, it was 2 a.m. and I had no business eating a stimulant like that when I was already trapped in a spiral of insomnia. But there I was. At least I didn’t pair the brownie with, say, a tiny glass of Bailey’s. Or a hot chocolate. That would have been criminal. I do have some self-control. It might be measured in grams, but still.

The “intruder” stumbled out to use the bathroom just as I was shoving the last bit of evidence into my piehole. I narrowly escaped brownie-shaming by a nanosecond. This is all to say that I have a shameless sweet tooth – it knows no bounds, and certainly has no timelines. I’ve been caught on other occasions scarfing down Cheezies and chips before breakfast (OK … for breakfast). I’ve been castigated at 5:30 p.m. for eating chocolate pudding (it’s considered an appetizer, isn’t it?). I’ve had ice cream ripped from my very hands (alright, maybe not ripped, but forcefully grabbed) right before bed. I cop to it all. Mea culpa. I just can’t help myself.

On that note, I recently heard Dennis Prager, the well-known radio personality, share this pearl of wisdom: “It’s more important to have self-control than self-esteem.” Point taken. I freely admit that my self-control needs a little work, so I vow, right here, right now, to eat decadent cocoa brownies only during office hours. And, since I’m retired, that is open to interpretation. Consider shift work.

As for self-esteem, that’s between me and myself, and I mostly have a handle on it. But self-control affects every part of life and can lead to behaviours that are socially unacceptable, like outbursts of temper, for example. Again, mea culpa. Lack of self-control in overeating can lead to poor health outcomes, and that also needs watching. Personally, I’m guilty of watching from afar. I must get on that.

Being someone who is (luckily?) colon-less in Vancouver, I have the luxury of eating whatever I want and not gaining an ounce. The flip side of that is, well, you don’t want to know the flip side. Suffice it to say that I’ve been known to over-indulge in certain items that are not in Canada’s Food Guide recommendations. On a regular basis. OK, OK, I need to pay more attention to what I am putting in my mouth (otherwise it might fall on the floor or land in my lap).

For now, though, I’m going to share my guilty little secret and be done with it. That translates to: I gave three-quarters of the brownies I made to my niece and only kept a quarter of them for myself. Those of you who are truly observant will notice the reflexive singular pronoun. Used, in this instance, because my husband Harvey has been on a diet for 11 months and has lost 52 pounds. He would no more dream of eating a brownie right now than he would dream of going to a five-star resort in St. Lucia without me. Unless, of course, he was looking for wife number four. Plus, he likes to delegate the eating, so I’m taking one for the team. Alas, the brownies are all for me, and me for them. Eaten at three-hour intervals, it equates to about 1,000 calories per day. For my hips alone. Pure speculation, of course. But I’m willing to risk it.

What I know for certain is that a brownie recipe I recently found – by Christi Johnstone of lovefromtheoven.com – is the bomb. You’re welcome. For your own well-being, do not – I repeat, do not – get on your scale for at least a week after you’ve eaten these brownies. Consider yourself forewarned.

I won’t even pretend to give you a nutritional accounting of this amazing snack because, even if I did, you’d ignore it. On purpose. I suspect it’s shockingly unhealthy, but, in the grand scheme of things, so is watching too much TV. But does that stop us?

The thing about these brownies is that they’re not overly sweet, like some are. They’re just moist, soft, rich, cocoa-y goodness. I imagine that you could freeze them, but then, why would you want to? More to the point, why would you need to? They don’t last more than 14 hours in my home. On a good day. Less, if there’s milk in the fridge.

I have another fudge brownie recipe that’s also pretty special, but there’s so much sugar in it that it makes my teeth hurt. Not that that’s ever really been a deterrent for me. I love all my brownies the same.