From filming and acting, to walking the red carpet, a group of 5-to-7-year-olds were filmmakers this summer. Their creation? The short Odd Life of Dr. Tooth. (photos from Art City)

It’s not every day that a group of 5-to-7-year-olds creates a movie. But that’s just what happened in Winnipeg this summer at Art City.

Art City was founded in 1998 by local artist Wanda Koop. She saw a need for engaging programming for kids and youth and, being an artist, she thought it would be great if there were a place where they could go to make art for free.

Since its opening, Art City has been providing after-school programs. In the summer, they run all day, from 9 a.m. to 8 p.m.

“Part of our model is that our staff and volunteers are mostly all artists,” said Josh Ruth, Art City managing director. “We also hire guest artists to come in and lead workshops, bringing their own art practice, perspectives and methods into the context of our community.”

One of the summer drop-in programs is Green Art, which is held at the park behind Art City. The idea of creating a movie came from the coordinator’s consultation with the kids about what they wanted to do this year. Art City invited as a guest filmmaker Noam Gonick.

“We all know him from his reputation as a filmmaker and he’s sort of a local art star,” said Ruth. “I asked if he would be interested in helping us out and he was really keen. He said the only reason he’d never done anything with Art City before was because he’d never been asked.”

Art City puts the kids’ ideas at the forefront of everything they do. In this case, participants wrote the script, developed the characters, made the costumes and sets – basically, they steered the whole creative process. 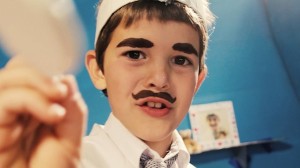 “The kids obviously developed their skills in terms of storytelling and understanding how to convey the message they are trying to get across to an audience,” said Ruth. “We feel it has some strong implications in terms of helping to grow literacy – not just reading and writing, but social literacy, and all those sorts of things, and working together in a team. Collaborating in that way always takes patience and problem-solving.

“In terms of working with Noam, he brings a huge amount of expertise, certainly in filmmaking, but in art-making in general. For example, I was in the office one day during the shoot and I overheard him talking to one of the participants who, for whatever reason, didn’t like what he was suggesting they do. And I heard him tell her, ‘You know, if you take direction well, people say you’re easy to work with, and then you’re more likely to get more work in the future. If you don’t take direction well, then people say you’re difficult to work with and that can be bad for your career. So, just keep that in your back pocket.’

“I thought that was a great way for him to shoot straight with the participants, even at such a young age, about the fact there are times when you get to do what you want and other times when you need to follow direction.”

Ruth felt the kids did an amazing job and that Gonick did a great job directing. As well, those involved in the post-production work were also invaluable, people like Ryan Simmons who edited the film along with Gonick, and Andy Rudolph who did the sound production. 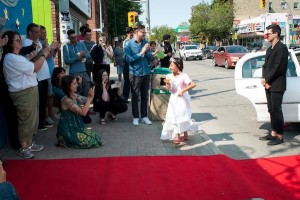 Ruth and staff created a première screening of the film that included the stars getting dropped off in a limo, walking down a red carpet, and enjoying champagne glasses full of gummy bears.

“The kids got out of the limo one by one and walked the red carpet,” said Ruth. “Then, they came into Art City, where we had set up a big screen and the kids had made their own VIP lounge passes. I was the security guard.”

Gonick said he felt a little lost at times, due to how Art City runs and the fact that he had very little control over many aspects of the film.

“They were looking for someone to mentor them, but not to bring an original concept to the table, just to help the kids realize their idea,” said Gonick. “Mostly, the shooting process, editing and, really, the idea came out of a workshop that Art City staff and kids did on their own.

“I was mostly just given their script. They cast it themselves and did all the designing ahead of time…. It was like being a director for hire and having 7-year-old producers. Given some of the producers I’ve worked with, the 7-year-old mindset was just par for the course.”

For Gonick, the experience was all about ensuring that everybody felt empowered, had fun and was involved. “You know, you don’t want children to be traumatized,” he said. “So, you just kind of make sure everyone gets to participate and that the ideas are fluid enough that everybody gets a part.”

There was a core group of six 5-to-7-year-olds but, on the morning of the first day of shooting, a seventh child joined the group, so a new role and scenes had to be created on the spot.

Gonick was at ease working with the kids, as he has been working with young stars as of late. “They are like any other group of actors,” said Gonick. “Everybody has their own needs and abilities. You just have to be responsive in the moment and get out of them what you can. The difference between this and working in a professional environment with kids is that I was conscientious that I didn’t push them too much.”

The 10-minute film, Odd Life of Dr. Tooth, is a surreal, non-linear story that follows the main character, who is a dentist. It begins with the dentist working on someone’s mouth and commenting on their poor dental hygiene. Then, suddenly, the camera closes in on the mouth of the patient and transports the viewer to outer space. Gonick incorporated this concept of traveling to outer space and animal kingdoms via patients’ mouths as a way to connect the disparate ideas that the kids had. The movie can be viewed at vimeo.com/138120558. For more on Art City, visit artcityinc.com.