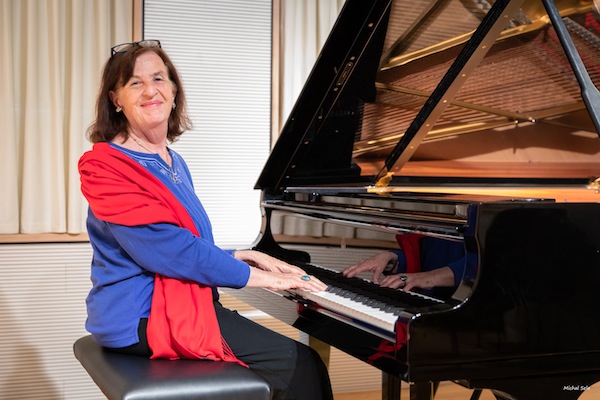 Loretta Kay Feld was asked by someone close to Queen Elizabeth II to compose three tributes, which, said Kay Feld, “were gifted to Her Majesty to honour her 70 years on the throne, a life filled with grace, fortitude and dedication to her country.”

One work is a personal song, called “The Queen’s Soliloquy,” that premièred last February. The second is “A Symphonic Medley of Music for Her Majesty’s Platinum Jubilee,” which includes four instrumental segments – from “Soliloquy,” the pieces “We Never Felt So Glorious” and “The Lord Chamberlain’s Processional March and Song,” and the third tribute Kay Feld composed for the Queen, which premièred last month, called “70 Years a Queen.”

Kay Feld was born in London and trained in music composition and drama at the Royal College and Guildhall School of Music. She toured with plays and musicals in the West End of London and has published several books. She is a prolific, award-winning composer, lyricist and author, who now lives in Ra’anana, Israel. She made aliyah 11 years ago and is in her final year of a master’s at the Jerusalem Academy of Music and Dance.

“I wanted to come here [Israel] since I was a child in Hebrew school but life has a way of changing your plans,” she said. “I got married and lived in America. I gave concerts all over New York, from 1973 into the ’80s.”

Kay Feld wrote for a children’s television network and composed music in many genres. She has written about 900 songs and musical compositions. One of those is the song “Hymn for Israel.”

“I wrote it after the Yom Kippur War [in 1973] and I received letters from Moshe Dayan and Menachem Begin thanking me. The ‘Shabbat Song’ I wrote is also on YouTube and is sung in communities all over the world. ‘I’m Going to Keep America Singing,’” she said, “was performed at the inaugurations of presidents Obama and Biden, played by the Marine band.”

Making aliyah was one dream come true. Composing for the Queen was another.

When Kay Feld was 19, she performed for the royal family at the Variety Club for Great Britain at Victoria Palace and, after the show, was escorted to the box where the royals were seated. She remembers speaking with Princess Margaret and shaking hands with Queen Elizabeth II.

The opening lyrics of “The Queen’s Soliloquy” are: “You may ask me what I’m thinking on my Platinum Jubilee / And of all these celebrations, what they really mean to me / Well, my mind keeps drifting backwards, to a life yet unforeseen / Trembling at my coronation, unprepared to become a queen.”

Kay Feld said she was offered a singer from the Royal National Opera House for “The Queen’s Soliloquy” but instead chose classical and contemporary singer Shlomit Leah Kovalski, who was born in Jerusalem to parents who made aliyah – her father from Montreal, her mother from New York.

Jamie Clarkston Collins and Eli Schurder of SoundSuiteStudio in Jerusalem do post-production of Kay Feld’s music and the videos are directed and edited by Jason Figgis.

Describing her creative process, Kay Feld said, “I compose when I’m out walking along the sea or in nature, and I think about what I’m composing and usually it just comes to me as if from the air. I write all the music in my head and the lyrics usually come at the same time and I go home and write out the manuscript.”

For her third royal tribute, “70 Years a Queen,” Kay Feld said, “I tried to write a song that I felt everybody throughout the world would be able to sing if they desired to. The melody is simple and the lyrics memorable with a tinge of humour.” Such lyrics as “… 70 years a queen / Four children in between / The Grandmama of future kings / Elizabeth, our Queen.”

The music is accompanied by the singing of renowned baritone Noah Brieger, who, Kay Feld said, “Has an outstanding voice with a great tone. He sang the lyrics with meaning and emotion.”

Brieger, like Kovalski, was born in Israel. He graduated from the Jerusalem Academy of Music and continued his training in the United States. An award-winning performer, he has sung in dozens of productions at the Israeli Opera, including lead roles in Don Pasquale (Donizetti), La Cenerentola (Rossini), La Bohème(Puccini), Romeo et Juliette (Gounod), Schitz (Rechter) and more. He also has performed in Germany, the United States, France, Italy and China.

Kay Feld is excited about a new project she has been working on for a number of years – 1897, The Musical. There are 27 original songs and the choreography is by her daughter, Dorothy Eisdorfer.

“The story is about the degrading things they did in Victorian times, but I want to tell the story with dignity,” said Kay Feld. “It expresses the desires of two women, one in the lower and one in the higher class.”

Her plan is to hire an all Israeli cast and crew, “to showcase all the wonderful talent we have here in Israel,” she said. “I’d like to find enough funding so I can pay all the performers fairly.”

She wants to film the musical and livestream it globally “for all the world to see. It will be a most splendid performance.”

For someone whose music has been performed for presidents and queens, Kay Feld remains humble. “I just believe everyone has a gift,” she said. “And if one can use the gift to make the world a better place, that’s what matters.”

Toby Klein Greenwald is an award-winning journalist, educational theatre director, teacher and the editor-in-chief of wholefamily.com. Anyone interested in supporting 1897, The Musical can write to Loretta Kay Feld at [email protected].